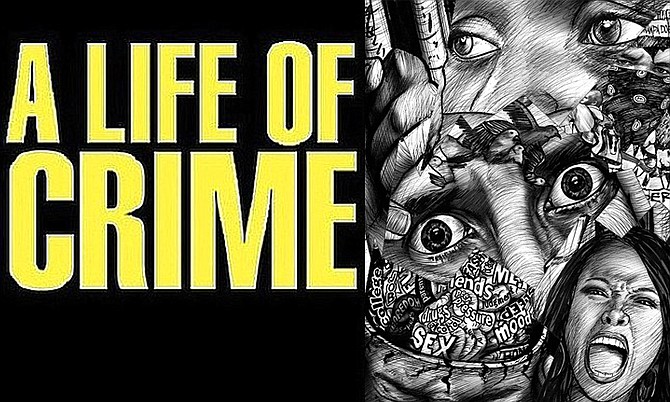 Today's illustration is a collage of previous images from artist Jamaal Rolle.

IMAGINE if it were you sitting in the witness box, under oath and asked this question: is the criminal justice system working in The Bahamas?

The answer firmly has to be no.

OK, you would probably prefer to fudge and mutter that, in some areas maybe, it works or that the system is a good one. The reality is that everyone knows that crime is out of control in The Bahamas and whatever has been tried has not stemmed the tide of horror.

The most recent Human Rights report released by the US State Department describes “an inefficient judicial system resulting in trial delays and an increase in retaliatory crime against both witnesses and alleged perpetrators”.

It further states: “Local legal professionals attributed delays to a variety of longstanding systemic problems, such as slow and limited police investigations, inefficient prosecution strategies, limited forensic capacity, lengthy legal procedures and staff shortages in the prosecutor’s office and in the courts.”

My greatest worry is that I do not see a clear strategy or plan to tackle this ever increasing nightmare; rather I see an attempt to develop a public relations approach which only serves to confuse the situation further.

The political blame game can only inflame societal anger further. It does not help to be told that some cases have been successfully completed: we need to know the accurate baseline data for:

1 The number of murders and other serious crimes.

2 The number of these cases where there has been an arrest and where charges have been made before the courts.

3 The waiting period before the case comes to trial.

The reason that the murder rate is used internationally as a baseline for crime is that it is the statistic that is followed by the news media as well as the “official figures”. This tends to increase the accuracy of the figures. There is a question of trust; most crimes are reported to the local police station or not reported at all.

I need to ask: are all of these reports put into the system? Who decides how the crime is classified?

It is these questions that can fudge the crime figures and I am not just suggesting that it only happens here; it is a recognised police and political tactic used in many countries.

The debate that seems to get most attention is the question of the courts granting bail to people charged with serious offences. This, of course, is related to the system’s inability to have persons tried within a reasonable period of time. If the waiting period was reasonable, bail need not be granted and this discussion would not be necessary.

The Constitution gives the right to a trial within a reasonable period, so the judges have to figure out what that means. The alternative would be for the Bahamas to give up freedoms that we take for granted. I could be picked up, “persuaded to sign a confession” and remanded to prison without bail. How long would pass before I would again see the light of day?

One year, ten years, 20 years awaiting trial before the lack of evidence could be revealed? We are all sick of this criminal activity – but is jail without trial the best solution?

I do not think so, but let’s look at the present reality.

Bail is, in fact, a scary prospect. Recently released figures show that after getting out of Fox Hill prison on bail, life expectancy is very short; it was stated that “22 per cent of this country’s murder victims were on bail for a major offence when they were killed”.

There seems to be a general acceptance that this is somehow right and just; after all they have killed so they get what they deserved. It is easy for me to understand the anger and venom that is felt by a murder victim’s family, the desire for revenge is a very human response. It also speaks to a complete lack of trust in the criminal justice system if family and friends have to take the law into their own hands and pursue vigilante justice.

The question still remains as to who is doing these killings. Is it family members? We are not all equipped to kill, so do some people pay other people to kill for them?

Who are these hit men, these assassins that are responsible for about one quarter of the Bahamas’ murder rate?

Are we so desperate for these “nasty criminals” to be out of the way that the authorities may turn a blind eye to this activity?

Is it possible that it is even encouraged? After all, it seems odd how many die with an ankle bracelet tracking system attached so soon after their release.

It would not be the only time such things have happened in the Caribbean. In 2003, a senior police officer was charged with a number of killings but he was not convicted; the suspicion was that he was involved in extra-judicial killings.

The other concern was discussed in the article two weeks ago on serial killers – some people find out that they rather like killing. They become hooked on the sense of power and the adrenalin rush; they then kill others, not just the hits they are paid to carry out, leading to more murders, not less.

This is similar to experiences in the military. Not all are suited for the job of killing and many return home with post-traumatic stress disorder haunted by nightmares of their actions; others are not so bothered and find it impossible to return to normal civilian life.

The actual court system itself is difficult for most of us to comprehend. It begins with the Magistrate’s court, which in lay terms seem to deal with minor matters (summary offences) and do the preliminary investigations of more serious (indictable offences) before sending them to the Supreme Court. This court has unlimited jurisdiction in both civil and criminal matters. Decisions made by the courts can be appealed to the Court of Appeal in The Bahamas and if its decision is not acceptable to either party the matter can be taken further, to the Privy Council in London. This certainly provides for appropriate checks and balances to ensure the law is properly followed but it is a slow and expensive process.

One part of this process that causes concern in The Bahamas is the trial by jury in the Supreme Court. This practice dates back to medieval law in England, but is it the best way to judge guilt in present day Bahamas?

The jury is apparently selected randomly from the pool of registered voters in the Bahamas; the idea that it is fair to be judged by one’s peers seems reasonable but it becomes increasingly difficult to judge fairly as the level of technical knowledge required to understand complex forensic evidence increases frequently.

In England recently, a judge had to dismiss his jury for what he politely called a “fundamental deficit in understanding”.

Add to this the difficulties in protecting juries from interference. Could a jury member be related to the accused? Is it possible to influence a jury member’s opinion with a financial inducement?

This is a small country and the complexities of seemingly straightforward matters never ceases to amaze me. However, one thing is certain: the country cannot survive unless the justice system begins to work. The only hope is to increase the likelihood of arrest and conviction.

It is time for the pontificating to end. If it is not possible to solve the problem internally, then outside help is needed. The Bahamas has always used outside help for complex issues: surely crime should be treated with the same level of importance.

NEXT WEEK: Conclusions - what has the Life of Crime series brought to light?

For previous articles in the series, visit tribune242.com and look under the Editorial section