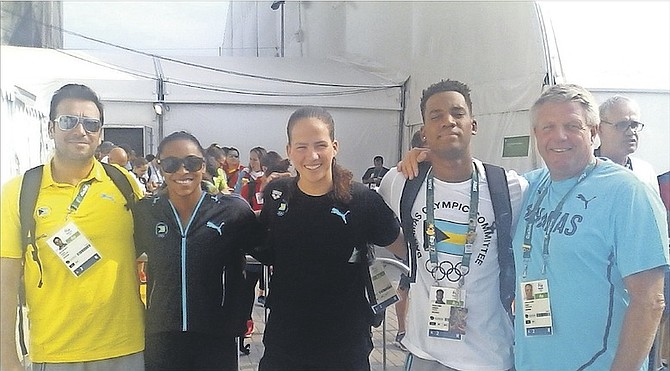 RIO de Janeiro, Brazil: Having won a medal in all of the major international events except the Olympic Games, Arianna Vanderpool-Wallace finished just two spots shy of qualifying for the semifinal of the women´s 100 metre freestyle on Wednesday. But she admitted that she has her sights set on her specialty – the 50m free – on Friday.

The most experienced member of the Bahamas three-member team was the last to see action after she opted not compete in the women´s 100m backstroke so that she can concentrate on the 50m free. Vanderpool-Wallace used the 100m free as a prelude to the shorter sprint and in the preliminaries, but she touched the wall in 54.56 seconds to place seventh and 18th overall, missing out of the opportunity to make the top 16 for the semifinal.

“I was looking for that front end speed and that is what I have,” said Vanderpool-Wallace, who is competing in the Olympics for the third time. “I just wanted to get in and used to the pool, so I´m excited about it. I feel great, so I´m real excited about going in the 50m.”

Entered in the fifth of the six heats of the two lap race, Vanderpool-Wallace reached the halfway mark in her first 50m in a split of 26.11. However, she dropped of the pace coming back on 28.45. The heat was won by world record holder Cate Campobell of Australia, who added the Olympic record to her ledger with her winning time of 52.78. Vanderpool-Wallace was just thrilled to be a part of the race.

“I feel great. I´m getting older now, so for me to compete in a lot of events is kind of difficult,” she said as one of the elder statesmen of the sport at age 26. “But I feel good and I´m ready to go.”

In the 50m free, she will swim out of lane three in the 12th and final heat. She is considered a favourite to win a medal.

“I really just want to make the Bahamas proud,” she added. “I know that I have the entire population cheering me on and that means a lot to me. All of the people who are saying prayers, I feel it and I really want to say keep praying for Team Bahamas.”

Having gotten her feet wet in the 100m free, Vanderpool-Wallace said the two lap race was a good indication of where she´s is going into the 50m.

“It takes a lot of energy and a lot of training, but it was great,” she summed up. “I know I have a lot of speed to go out, so we will see what happens.”

With seven of her teammates here from Charlotte, North Carolina, Vanderpool-Wallace said she´s a little jealous because six of them have already medalled with one more to go – and then it is left up to her to clinch her own on Friday.