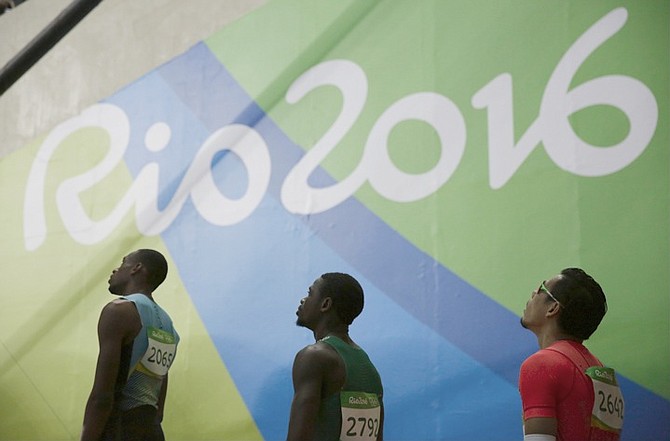 Bahamas' Steven Gardiner, Nigeria's Orukpe Eraiyokan and Japan's Yuzo Kanemaru enter the stadium to compete in a men's 400-metre heat during the athletics competitions of the 2016 Summer Olympics at the Olympic stadium in Rio de Janeiro, Brazil. (AP)

Sunday sees the following members of Team Bahamas in action:

The full schedule for Sunday is:

Men’s Epee Team First Round, Quarter-finals and Semi-finals, 8am

Men’s Final Round, 6am

7.30pm: All eyes are now on heat three of the men's 400m semifinals where Steven Gardiner starts in lane five.

11.45am: Fifth place for Shavez Hart with a season's best of 10.28. Usain Bolt finished first in the heat after being slightly slow coming out the blocks.

11.20am: It's Jamial Rolle in action now – he finishes eighth in heat four with a time of 10.68. Shavez Hart will be up soon in heat seven - lane two - competing against Usain Bolt.

Adrian Griffith (right) in action in the 100m heats. (AP)

Shaunae Miller winning her heat in the 400m. (AP)

9.15am: If you've got your breath back after Friday's Olympic drama, here's what's in store today for Team Bahamas: