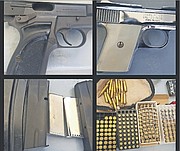 Guns and ammunition retrieved by members of the Royal Bahamas Defence Force.

THE Royal Bahamas Defence Force apprehended two persons on Saturday morning for possession of undeclared weapons aboard a vessel in the Abaco chain.

The 38-foot United States registered sailing vessel was boarded at 11.30am while anchored in the area of Great Guana Cay, Abaco.

One .25 automatic pistol, one 9 millimetre pistol, one AR 15 magazine, two .25 magazines, 20 rounds of .223, and 123 9mm rounds were found on board after a search was conducted by HMBS Arthur Dion Hanna’s boarding team.

The captain and passenger were apprehended and escorted to Marsh Harbour, Abaco where they were handed over to police and customs officials for further processing.

Additionally, the American captain of the vessel was later fined $10,000, the weapons and ammunition were confiscated by the Department of Customs for failure to declare.

Both persons were turned over to local police for further investigation after it was also discovered that the captain had only declared one of the weapons to the Department of Customs prior to the vessel being boarded.