Work on the new baseball stadium going as planned 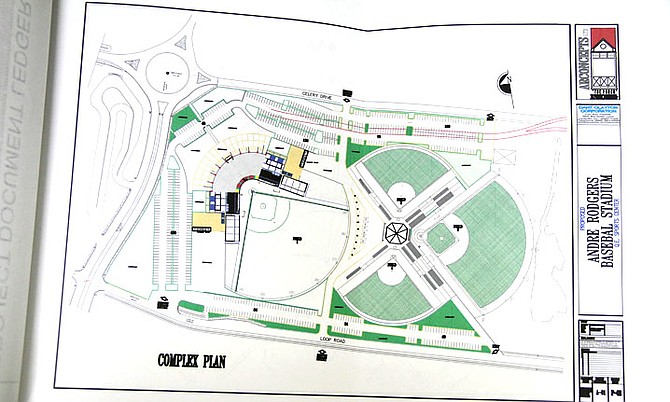 WORK on the new Andre Rodgers Baseball Stadium, with a synthetic field, is going as planned, on schedule and on budget, according to Minister of Youth, Sports and Culture Dr Daniel Johnson.

His comments came yesterday as he, along with architect Michael Foster, brought the media up to date on the latest developments of the 4,500 spectators’ seating stadium, which will occupy 24.80 acres of land at the Baillou Hills Sporting Complex.

Director of Sports Timothy Munnings said the Ministry would hold periodic briefings as they continue with the construction.

“In the next couple of weeks, you will see a lot of flat beds with the framework, the roof, the carriages for the grandstand and most of the copper structure on site,” said Foster, whose AR Concepts, The Bahamian Architect Group, is responsible for the designing of the stadium.

“We played a trick on the media and the public. The typical Bahamian, you say you are going to do something and they don’t understand the process. They want to see something tomorrow. The people who follow sports in our country are very cruel. I understand that.”

To ensure that everything would be in place, Foster said the company which manufactured the stadium, began the process from last November and now the fabricated portions are on the way, completely ahead of the construction that is currently taking place at the site.

“I imagine that by February, the stadium is going to be up, people will drive by and think it will be a day or two away from completion,” Foster said. “But there will be a lot of work to be done.

“I imagine that by February, the roof and the structure will be on and the proceeding months, you will see the exterior, the parking lot will begin. Once the crane goes down, the preparation for the field will begin.”

By March 2016, 90 per cent of the stadium will be completed and between May and June, Foster said everything should be up and running.

“The foundation is out of the ground, 100 per cent and the construction columns of the stadium, we expect to see them erected as early as next week,” Foster said.

“I think everybody has seen the huge crane on the site, but that was a huge challenge getting that there.That will make the construction very easy. The specimens for the stadium are still the same with a seating of spectators and there will be a 5,000 square foot area for office spaces on both the ground and second level.”

Although he would have preferred the grass turf on the field, Foster said it was agreed to go with synthetic surface that would allow the government to utilise the stadium on a daily basis for activities that will not just be limited to the game, but also of a cultural nature.

“If we are going to satisfy the local and international people, who will come here to play, we have to use a surface that is realistically manageable and we have recently visited a number of college stadiums and we were particularly impressed, particularly Louisville, Kentucky and they have the synthetic field.”

After a 30-year dispute, Johnson said he wants to assure the public that “baseball is indeed back” and they will see once the new stadium is completed.

“I made that promise to Jim Wood. Jim Wood passed away and he did not get to see this day, but last week Friday, we honoured his name and his reputation and what he has done in this peace deal,” said Johnson about the dispute between the Bahamas Baseball Association and the Bahamas Baseball Federation.

“All federations, which intend to use those facilities, just like that the basketball stadium, will be subjected to a user’s fee.

For those organisations that already receive a grant from the ministry, Johnson said they will get an increase, but part of it will go directly to the NSA for the maintenance of the facilities that the sporting organisations intend to utilise for their activities.

Sweeting and the federation played a role in helping to get nine Bahamians playing for Great Britain this year in the World Baseball Classic. But Johnson said that will never happen again as the Bahamas will seek to field its own team to play in the future.

With baseball being included in the 2020 Olympic Games, Johnson said they will be doing all in their power to ensure that the Bahamas takes full advantage of the opportunity. He said professional player Antoan Richardson, who made an impact in getting the players to team up for Great Britain, will be called upon to play a pivotal role in that regard.

Once completed, Johnson said the National Sports Authority would be in charge of the scheduling for those international teams that want to come in to compete and those local organisations that will seek to participate.

Johnson also said they have had a town meeting with the residents in the area and those affected, have compiled and reconfigured their yard so that they won’t be affected by the ring road that will be erected around the stadium.