Loretta: I Have No Fear Of Dr Rollins 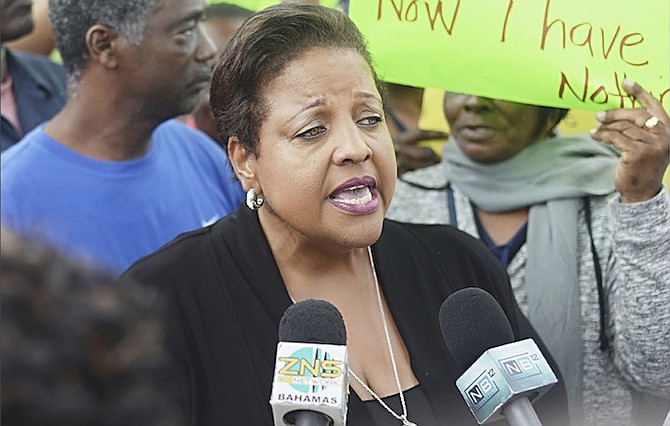 LONG Island MP Loretta Butler-Turner said yesterday she is “not at all concerned” about or afraid of a possible challenge for her seat by Fort Charlotte MP Dr Andre Rollins.

In fact, Mrs Butler-Turner said if the people of Long Island want “bad, lackluster” representation, “they are free” to have Dr Rollins.

In an interview with The Tribune, Mrs Butler-Turner said she has gone above and beyond for the people of Long Island and urged her constituents to “speak with” the people of Fort Charlotte “to see just what they think” of their current member of Parliament.

On Thursday, Dr Rollins, a member of the Free National Movement, said he would challenge Mrs Butler-Turner as an independent candidate if the voters on the island urge him to do so.

His threat came hours before the FNM announced it had ratified Mrs Butler-Turner as its standard-bearer for the constituency in the next general election.

Speaking to Mrs Butler-Turner’s representation in her constituency, Dr Rollins claimed that voters in Long Island are at their wits’ end with the MP.

“I think if you were to look across the whole spectrum of MPs sitting in Parliament, I do not have to blow my own horn,” Mrs Butler-Turner said, when contacted for comment.

“I have been a stellar MP and I trust the people of Long Island, when they make their decision, it will be the right one. There is always competition in an election, you will always run against someone, but I have no fear of Dr Rollins. “The people will vote based on performance. Dr Rollins cannot do what I have done for the people. He has his own constituency, does he not? Why isn’t he running to be their representative? The people of Long Island only need to ask the people of Fort Charlotte what kind of representation they have gotten from Dr Rollins. There is a reason he isn’t running there as an independent.”

On Thursday, the FNM also announced that former Democratic National Alliance Chairman Mark Humes had been ratified to run in Ft Charlotte.

Mrs Butler-Turner called Dr Rollins’ performance as a member of Parliament “lackluster at its best.”

“There is no competition,” she added. “Everyone seems to be looking for something to get into and he chooses Long Island, I have no fear in that. I have done my best,” Mrs Butler-Turner said.

“If the people of Long Island don’t want good representation and they want Dr Rollins, they are free to have him.”

Although she is considered to be a very popular MP, there are some on the island who have said they do not want her as their candidate.

Earlier this month, former Cabinet minister Tennyson Wells told The Tribune that he instructed a group of voters in Long Island to draft a petition for Mrs Butler-Turner’s removal if they truly wanted another FNM candidate.

Ok Tal, we're waiting for your comments now. Cause you know you can't resist commenting whenever anything appears in this forum that deals with LB

What can Loretta say that she has achieved for Long Island in the last four + years???? The island still has no mail boat and no dock for Clarence Town ......... the airstrip that was put there by Pop Symmonette is still there ......... there is no potable water beyond Grays or Turnbull ......... there is no functioning agricultural extension services ........ there are no public parks or beaches available ........ South End is a ghost-town with no jobs or investment......... the people still has no access to Crown Land or generation property for banking or investment purposes ........ the farmers/plaiters/crabbers still cannot sell their produce to neighbouring islands because there are no inter-island services ...............tourism is still at pre-2000 levels .......... the schools are still dependent on PTA and donors to operate because they have no government budget .......... Local Government still has the same budget from 10 years ago..........so what is there for any politician OR Minnis and LBT to shout about???? ........ we Long Islanders cannot wait to hear what dribble the politicians are bringing this time around

Wow. . .what has happened down there for the last four years? Even though the PLP is vindictive enough to "stave" LI to make LBT look bad was publically expressed in the house by MP Mitchell of Fox Hill after he determined that LBT had such a big mouth. Therefore, I don't know if I would go that far and "saddle" LBT with all of the "did not happened" in LI for the duration of the last government. . .the PLP can be childish and mean like that so. . .

regardless of that long island has been hit even worse after the hurricane and Loretta was the first to respond to the people. Anyone who says not is a liar. The PLP has done nothing for Long Island and the only party to ever give Long Island does have is the FNM. The millionaires like Wells should try and pump money into long island instead of spending time trying to dig a hole for someone else.

The FNM put in some infrastructure in the 1990s and expected wealthy Long Island descendants to invest .......... sadly, that has not happened to date

You just outlined a slew of things that should not even exist. Long island is one of the gems of the Bahamas in terms of beauty, potential and its peoplec, and it seems as if that has been a problem for every government. LI performs despite the BS it gets from the FNM and PLP. They are warriors. That list is stunning but that inter-island service is key to tourism and just basic life in that part of the Bahamas. If we could just get a service going between Long Island, Cat Island and Exuma and then Acklins and Inagua- it would go a long way in expanding the possibilities down there. I want the government to commit a hundred million each year for ten years to infrastructural improvements in the southern Bahamas - not to cronies- but for projects the local people and national planners agree would impact the lives of residents in major ways. Long Island - like so many other islands could become models for new design, new lifestyles and investment. The list of needs above suggests that the government is trying to break the LI spirit and wants to cultivate a neediness in the people. Independent spirits scare politrickans- Soldier on LI. Soldier on.

Agreed ............ but there are at least 150 millionaires directly descended from Long Island who have extensive business acumen (inclusive of Tennyson Wells and Frank Watson) ......... but they fail to invest in any tangible way in their island .......... one exception is Ellis Major (of Budget Food Store fame)

Regardless 3 years, 8 months ago

I am just getting so sick of these politicians! All !!!!!!

Wells and Rollins sucks that is why Bamboo Town it is the way today. Loretta is the best !!!!!!

The PLP has always blackballed Long Island especially the Central and Southern areas. Loretta has been MP under them and has had her hands tied as to what she could do with respect to any support from the government. Unfortunately, and if truth be told, the FNM did very little for them in the 15 years that they had the government. The lesser of two evils will be the FNM, but as far as any concrete development plans by either party for the people of Long Island, that is wistful thinking.

Is Well or Rollins any better

Loretta All the way

LBT was the first on the ground after the devastating hurricane and organizing plane loads of donations before NEMA knew what hit the Southern Bahamas ..how quickly we forget.

Well both of them are politically damaged goods and him too (Wells). The best time to evaluate a politician us when they are down and out. If they are humble and still willing to be a servant of the people and still remain relevant, then they may be a good candidate. They are still willing to be the people's servant. If they are still cocky and arrogant then imagine who they will become when they have power (and glory). Minnie did a good job in " Taming of the Shrew'. but unfortunately Rollins still have a lot of Brutus in him (Et tu Brute' ?).

its a shame LBT's comments are filled with such an attitude of superiority and almost like she doesn't give a s*#t what the voters do.. i would expect more engaging and positive comments such as 'i have tried to serve the people of LI to the best of my ability' as opposed to 'i have been a stellar MP'. it gives me the i-am-doing-you-all-a-favour feeling as opposed to 'i am here to serve you all, if you elect me again'... but then again, bahamian politicians do tend to resent the idea that they are accountable to us, the electorate..

Doesn't matter who wins the seat or which party wins the election. We are stupid broke and no serious amount of money will be allocated to Long Island especially when the people of the island are resourceful and can obviously fend for themselves.

She is getting back just what she did to doc all long for 4 years! But now she getting it from one of her co-conspirators. . . oh how ironic. . .a public jooking match by two of the previous jookers. . . THIS GER BE LONG!