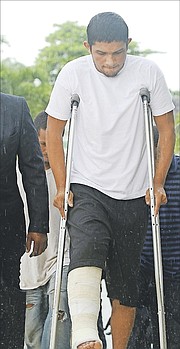 A PERUVIAN man was remanded to prison without bail yesterday after he was arraigned in Magistrate’s Court concerning the killing of a disc jockey who was shot at a downtown nightclub.

Jesus Ramos, 28, of Stapleton Gardens was escorted into the Nassau and South Streets court complex to face murder and attempted murder charges stemming from a shooting incident on Woods Rodgers Wharf on Sunday, September 4.

Ramos, with the aide of an interpreter, was told beforehand that he would not be allowed enter a plea to either charges until he is formally arraigned before a judge in the Supreme Court.

It is alleged that on the date in question, he intentionally caused the death of Jorge Herrera. It is also alleged that he tried to kill Hanna Palomino in the process.

According to initial police reports, shortly after midnight, three men, believed to be Hispanics, were put out of a nightclub after creating a disturbance.

Shortly after 3am on September 4, one of the men returned to the club armed with a handgun. He then got into an argument with Herrera - the disc jockey - who attempted to disarm him, police alleged. This led to the disc jockey, the armed man and Palomino being shot.

The armed suspect then fled the scene in a Nissan vehicle.

Police later recovered a .40 handgun in the area, believed to be the weapon used in the shooting. Herrera and Palomino were taken to hospital.

The disc jockey died of his injuries six days later on September 10.

Ramos, who was unrepresented in yesterday’s arraignment, returns to Magistrate’s Court on November 4 for the case to be fast-tracked to Supreme Court for trial.

He was remanded to the Department of Correctional Services in the interim.