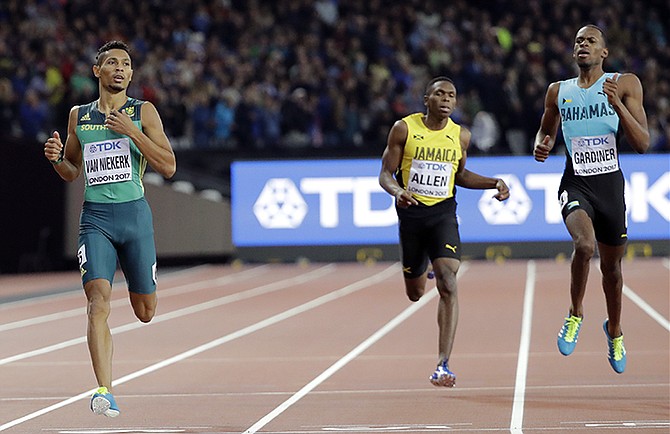 Two days after he broke the national record with 43.89 seconds on Sunday night in the semifinals, Gardiner became the second Bahamian male to medal at the biannual championships and the first member of the 24-member team here to get on the podium in the Queen Elizabeth Olympic Stadium.

His time of 44.41 seconds secured the silver as he couldn't catch South African Wayde van Niekerk, who successfully defended his title in a winning time of 43.98. Surprisingly Qatar’s Abdalelah Harqoun got the bronze in 44.48. In the process, Gardiner joins Avard Moncur, the only other Bahamian to medal in the men's 400m when he snatched the gold in 2001 in Edmonton, Canada.

"I felt pretty good about my performance," said Gardiner, who had to skip his victory lap to receive medical attention. "I came into the final with some dead legs from the semifinal, but overall, I held it together, brought it home and got second, a silver medal.

"I thank God for finishing healthy and strong."

While Gardiner had to seek some medical help from team doctor Keir Miller and physiotherapist Eugenia Patton in the medical centre after the race, he was greeted by Minister of Youth, Sports and Culture, Michael Pintard; Director of Sports Timothy Munnings, IAAF Councilwoman Pauine Davis-Thompson and team officials, including co-manager Maybeline Miller, head coach Dianne Woodside-Johnson and relay coordinator Rupert Gardiner.

21-year-old Gardiner, who hails from Abaco, said he will get a good night’s sleep before receiving his medal on Wednesday night just before he cheers on Shaunae Miller-Uibo in the women's 400m final at 4:50 pm EST. He earned a hefty pay cheque of $40,000 for his efforts on Tuesday.

Where them jackasses who always criticizes Bahamians? Go suck 🍋 lemons and limes

Congrats! Thank God. Hope we have another one or two tomorrow.

Great effort especially when you consider the small population from which to choose athletes compared to the big countries.