Gold For Steven Gardiner In 400m 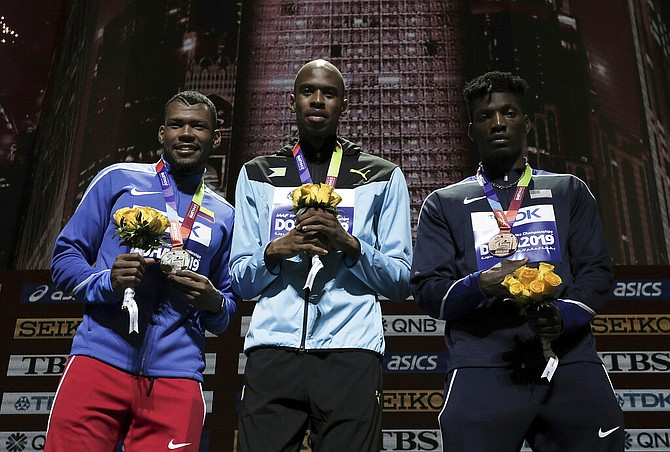 DOHA, Qatar: World champion. Those were the two words to label Steven Gardiner after he ran the "perfect race" to obliterate his own Bahamas men's 400 metre national record at the 17th IAAF World Athletic Championships.

On Friday night at the Khalifa International Stadium, the Abaco native became just the second Bahamian male to sit on top of the planet in the one-lap race and the fourth individual male champion.

His time of 43.48 lowered his previous national record of 43.87 that he established on May 4, 2018 right here in Qatar and will allow the Bahamian national anthem to be played for the eighth time – and the first at this event since Donald Thomas triumphed in the men's high jump in Osaka, Japan in 2007.

Two years earlier, Tonique Williams would be the last Bahamian female to win a gold with her victory in the 400m in Helsinki, Finland.

It also placed him sixth overall on the all-time performance list as he improved on his silver medal behind world record holder Wayde van Niekerk of the Republic of South Africa two years ago in London, England.

Left to trail behind him for the silver at these championships was Colombia's Anthony Zambrano with an area record 44.15 and American Fred Ferley, the second ranked competitor in the world this year, with the bronze in 44.17.

Gold medal and world champion Steven Gardiner, third from right, and, from left, Kirani James, of Grenada, Machel Cedenio, of Trinidad And Tobago, Fred Kerley, of the United States, Demish Gaye, of Jamaica, and Akeem Bloomfield, of Jamaica, compete in the men's 400 metres final at the World Athletics Championships in Doha, Qatar, Friday. (AP Photo/Martin Meissner)

After speaking with his family immediately after the race back in the Bahamas, a jubilant Gardiner said he was pleased to make everybody in the country proud.

"I just kept saying in my head, you gat it Stevie, you gat it just keep going," Gardiner said. "When I got to the line, my mind was saying, it's over, just relax."

He called it a big accomplishment for him and he's going getting better in time. His next goal is to get ready for his first medal at the Olympic Games in 2020 in Tokyo, Japan.

Gardiner, 24, follows in the footsteps of Avard Moncur, who claimed the Bahamas' first 400m title in Edmonton, Canada on August 6, 2001.

He also joined Shaunae Miller-Uibo in providing the Bahamas with a medal at these championships on the same day that she collected her silver from the women's 400m – in which she broke the CACAC area and Bahamian national record.”I knew that he was going to go hard at it. I'm so proud of him," said a jubilant Miller-Uibo, who joined in the Bahamian celebrations at the finish line.

"He went out there and gave it his all. He came out with a new national record as well. That's pretty impressive."

Miller-Uibo, 25, said the aim was for her and her close friend Gardiner to rock Doha and make the Bahamians proud at home.

“Hopefully we did that,” she said.

With no relay teams to compete in over the final two days of competition, Team Bahamas will leave Doha with those gold and silver medals.

And at the end of the eighth day of competition, the Bahamas was sitting tied for 10th place with Sweden. The United States was leading the pack with nine gold, nine silver and four bronze for a total of 21 medals.

I love Shaunae but I am proud that a Bahamian male has taken his place as king!

We are all proud of both of you! Our Bahamian champions!

You have made us The Bahamas very proud. So very great for all the young men of our Country. Hold your heads very high and do well.