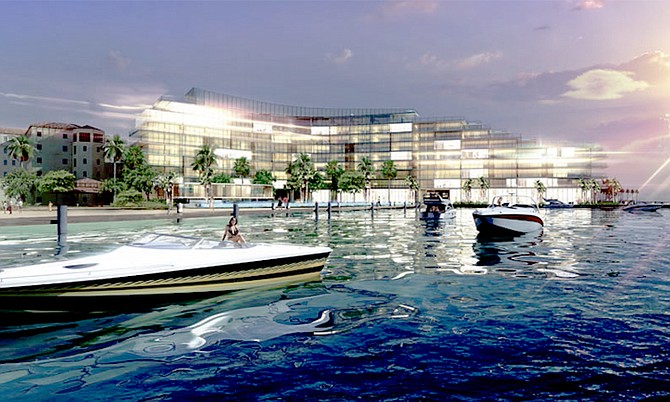 THE CHINESE government’s reported crackdown on “irrational” overseas investments may affect projects in the Bahamas with new restrictions on such projects in property, hotel and entertainment and a ban on gambling investments.

Bahamas Institute of Chartered Accountants (BICA) President-elect Gowon Bowe told The Tribune that while it was important to distinguish between the Chinese state and capital markets in Hong Kong, which has its own independent stock exchange, the recent codification of its policy highlights the critical need for the Bahamas to strengthen its own economic planning unit.

Mr Bowe said: “While China has significant influence over Hong Kong, Hong Kong has capital markets, effectively it has a stock exchange and the stock exchange doesn’t have restrictions on who can invest in it. While there is the notion of influence from China, (the Hong Kong stock exchange) is more free market economy as opposed to communist.

“But China itself has a tremendous amount of capital, it still controls its currency, and its investment policy, and controls what companies can and cannot do.”

Mr Bowe, former Chamber of Commerce president, explained that the restrictions reinforce shifts taken by the Chinese government to push its Belt and Road Policy, a transition in investment agenda that focuses on projects that increase trade with long-term sustainability.

His comments were supported by US news agency Bloomberg, which reported that the National Development and Reform Commission, the top economic planning body, has criticised “irrational” overseas investment in some sectors, while encouraging projects linked to the Belt and Road initiative. The NDRC reportedly cited problems with overseas investments, adding that some companies made rash decisions and sustained losses.

In a statement on Friday, China’s State Council announced a ban on investments in core military technology, gambling, sex industry, and investments contrary to national security.

According to Bloomberg, “China’s outbound investment slumped 44.3 per cent in the first seven months from a year earlier as policy makers imposed brakes on companies’ foreign acquisition following a record spending spree in 2016.”

“The One Belt, One Road policy centred on trade,” Mr Bowe said, “looking at China’s investment in other countries and investing in projects that would have the ability to actually increase trade. So the building of transshipment ports, roads, to increase the trading economy. Their focus on investment has moved to what they termed long-term sustainable type initiatives.”

He continued: “The (Bahamas) government has to strengthen its own economic planning unit to develop land policies, investment concession policy, and then overall investment policy to say what the government wants investment in.

“So we can fight fire with fire,” Mr Bowe said, “by having technically competent or experienced individuals directly employed or through consultancy, using the great minds in the Bahamas that have already done it. So that any government-owned enterprise or influenced enterprise is treated no different than a private investor. Where we analyse sovereignty, and our ability to regulate the investment.”

He said the country has taken for granted that good foreign direct investment projects like Atlantis and Baker’s Bay remain in our collective memories longer than negative outcomes like the failed Ginn sur Mer project in West End, Grand Bahama and the shuttered South Ocean resort.

Last month, Bloomberg reported on an escalated clamp down by the Chinese government on overseas investments, citing pressures on Anbang Insurance Group Co to sell the Waldorf Astoria hotel in New York.

Concerns have been raised over whether CTFE will also face state pressures given that the Baha Mar asset will be held by China Export Import Bank until mid-2018.

Yesterday, Mr Bowe advocated for the shift in the Bahamas government’s agenda from investor to facilitator and regulator, and a concrete investment identity for the country.

“Too often we’ve had bespoke negations, where every single investor comes and sits down with a new playbook,” Mr Bowe said.

“What do we want the identity of the Bahamas to be? What do we want to give up to develop that identity (concessions), and how do we obtain the technical expertise to ensure what we get back is what we intended when we gave it up?”

SHANGHAI (Reuters) - A recent crackdown by China on overseas investments has been assumed to be mainly focused on high-profile acquisitions of things like hotels and football teams around the world.

However, Chinese regulators also appear to have their eyes on two other lower-profile industries: gambling and sex.

China's cabinet on Friday issued rules on acquisitions abroad for the first time, possibly signaling a further slowing of the flood of money that has flowed overseas in recent years.

Investment in property, hotels, entertainment, sports clubs and film industries would be restricted as part of the new guidelines, which the cabinet said were aimed at defusing risks and preventing crime.

But it also said that overseas investments in the gambling and sex sectors, as well as exports of core defense technologies, would be banned as such activities could endanger national interests and security.

The statement did not elaborate on what it meant by the sex and gambling industries, but Chinese businesses have been prolific builders of casinos in countries such as Laos and on the Pacific island of Saipan that are popular with Chinese gamblers. Gambling is banned on the mainland.

Although Beijing began its crackdown on what it calls "irrational" overseas investment at the end of 2016 by tightening control on capital outflows, it had not issued official rules until Friday.

"As early numbers indicate, cross-border deal activity among Chinese companies has dropped in the first half of 2017 from the same period last year," he said.

Thomson Reuters data released this week showed that all outbound mergers and acquisitions from China dropped 42 percent year-on-year as of August 14.

But Chinese acquisitions in countries officially linked to the Belt and Road initiative, a signature foreign policy of President Xi Jinping, totaled $33 billion, surpassing the $31 billion tally for all of 2016, the data showed.

Chinese companies have been on a global buying spree, snapping up football clubs, movie studios and skyscrapers, but they have hit road bumps in recent months thanks to financing restrictions.

"There are profound changes taking place in China and abroad that offer good opportunities for Chinese firms to undertake overseas investment but also carry many risks and challenges," the State Council said in the statement.

sounds like the commies and the PLP are alot alike.....no wonder right???

Simply amazing that Red China bans gambling on its mainland because of the criminal and other undesirable activities that it attracts, which activities it considers to present a danger to its national interest and security, yet Red China has nevertheless exported gambling to other countries like ours through its foreign investments. What a joke!

An even bigger joke is that Minnis and his cabinet members have remained totally silent on the subject of repealing all of the web shop legislation enacted by the corrupt Christie-led PLP government and replacing it with legislation to establish and regulate a national lottery for the benefit of our public education system. It seems Minnis and the FNM may have sucked heavily on the 'funding teat' ('tit') of the corrupt racketeering numbers' bosses, like Sebas Bastian and Craig Flowers, in order to fund their election campaign. We can only guess what the quid pro quo must have been. The last thing any of us wanted was a new FNM government led by a PM who would be willing to lie in bed with the numbers' bosses!!!

According to roc wit doc Mr: Christie was in bed with the Chinese, now he is. all smuggled up. Web shops and VAT will remain. and Bains Town tax free zone. he was just joking.

This may be a good time for Ismarilian to get back in.