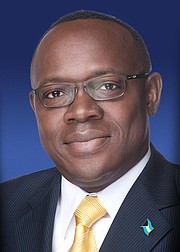 “Those represent his personal views to which he is entitled to make but they don’t represent my view and I disagree with his view,” Mr Bell said. “A combination of reasons (caused the PLP’s loss) but I reserve my views for the moment. No need to add to the confusion.”

Mr Cooper’s comments, taken alongside remarks from former PLP chairman Raynard Rigby which were reported in The Nassau Guardian yesterday, came amid a divide in the PLP concerning how the party should chart its future course.

Some senior officials do not want critical comments about the organisation expressed publicly and they were said to be upset yesterday by Mr Cooper’s comments.

Officials like Mr Cooper, Mr Rigby and Mr Sears, however, have broken from this mould to openly call for party reform.

As for Englerston MP Glenys Hanna Martin, she said: “At the appropriate time I intend to discuss matters pertaining to the party and its future internally. That approach is commonly accepted as best practice.”

Mr Sears, who insiders expect to vie for a leadership post at the part’s next convention, applauded Mr Cooper.

“I applaud Chester Cooper for reminding the Progressive Liberal Party of its core values, its departure from those core values and to have the courage to admit any errors made and to begin the process of introspection, reengineering and rebranding,” he said. “I believe it is only in this manner that the Progressive Liberal Party will regain the trust and support of the majority of the Bahamian electorate. This process provides the PLP with an extraordinary opportunity to present the Bahamas with a progressive agenda to complete the quiet revolution and a more sustainable economy rooted in Bahamian ownership.”

Mr Cooper, in a speech before the National Progressive Institute on Monday night, said the PLP lost the recent election for many reasons.

He said the party ignored scandals and condoned behaviour it should not have.

He also said the party lost touch with the people it most sought to help. Although he said the PLP made contributions that the country will come to appreciate in the future, his speech was striking for its criticisms of the organisation of which he is a part.

When discussing the party’s recent defeat, Mr Davis and the PLP’s leader of government business in the Senate, Fred Mitchell, have struck a different tone in public from Mr Cooper.

For the most part, they and other senior officials in the PLP have refrained from criticising the party’s recent record and performance and have tended to emphasise the idea that “untruths” propagated by the FNM played a role in the party’s loss.

Not long after the PLP’s loss on May 10, Senator Mitchell said in a widely-circulated Facebook post that PLPs should not believe the FNM’s “propaganda” about themselves.

“The objective reality is that they simply have a mandate to govern for five years,” he said. “There is nothing revolutionary about their victory or far reaching. They were able to manipulate a population suffering from the ill effects of the economic recession which was never overcome and the turn of clever phrases plus the money of foreign interests to accomplish what they have and the failure of the PLP to correct the problem.”

Enough all ready. No need to give persons who are against the PLP more fuel for their torch, I do appreciate and love Mr. Christie for all that he did for the Bahamas and its people. No need to walk on him when he is down. I never thought much of Rigby. Love you Mr.Christie : :

Someday let's have a list of "all he did for the Bahamas"....lie, obfuscate, sell his office to the highest bidder, fail to show up in times of crisis, promise material critical to good governance and never, ever actually deliver... How can anyone, no matter how partisan, not gag suggesting that Perry was "good for the Bahamas"? It will take a decade to clean up the messes he left.

We the people don't want see that man near one leadership position in this nation again! Mr. Christie sucked as PM. . .and I would advise Mr. Sears to keep himself away from the whole bunch of them PLPs dem in the HOA. . .Sears is the only PLP that I see who has a bit of "nice" left in him. . .other persons see him as that too. . .stay away from that group Sir!!

Curious to know, who are you determine what Mr. Sears should do?

And to speak on behalf of what other persons see in him?

I's one of them peoples dem dat sent dem crooks into permanent political retirement. . .that bunch in the HOA are on target. . .THE PEOPLE'S TARGET. . .we will hound dem into oblivion. . .the PLP is dead forever. . .if Mr. Sears stay connected to that corrupt bunch. . .persons are saying. . .just like we dumped plenty of them because of their connection to PGC, SG, GHM, OW, BBB, Fritz et al etc. . . we murderized nearly the whole party. . .one of which was Mr. Sears, who had good reviews among the people. . .but he was connected to the wrong party. . .we will never choose him for anything. . .because to give him a chance is to give them pirates a chance again! You nor Mr. Sears need to listen to me. . .just like my PLP friends ignored advice about supporting PGC. . .he will grow old and not see the opportunity to be PM!! By the way. . .word on the street is "heck we missed four of dem buggers. . .we don't want to see or hear from none of them from that last government or the PLP ever again". The people have concluded that as it was the UBP who were corrupted to its core and would not change. . .we are on a mission to bury the PLP for good. . .corruption and all!! THE PEOPLE SPOKE IN NO UNCERTAIN TERM LAST MAY. . .THAT'S HOW I CAN SPEAK FOR THE PEOPLE. . .THEY THEMSELVES SHOUTED IT FROM THE HOUSE TOPS LAST MAY!!! SO DON'T ASK ME ANY STUPID QUESTIONS AGAIN. . .

Sears was on the "inside" for the longest time and had his opportunity to speak out against all of the corruption he knew full well was taking place within the Christie-led PLP government. He failed the people by choosing instead to go after the money with his support of the corrupt racketeering activities of the numbers' bosses like Craig Flowers and Sebas Bastian. He has made his bed and there is certainly no redemption to be had by him from the people, and possibly none by one other come that time for him. His lackluster (some would say, appallingly dismal) performance as AG and Minister of Education under a previous government effectively spelled the end of his ability to achieve anything in active politics. But like so many other political dinosaurs he will make it a point to thrash about to no avail in the wilderness of banished politicians from a totally different era.

Sears has no credibility left. If I was Chester Cooper,I would stay far away from him. He is just another plp pariah.

Cooper strike me as a Pyswell Forbes type of faker. . .talking out of two-sides of his mouth. . .and I know Mr. Sears personally. . .Cooper can't even come close to Mr. Sears!!

These University folks will find out soon enough that Mr. Christie does not need any one to vote for him they do. and if they abuse Mr. Christie many who love him will have a gone "fishing day' when they need their vote.

kalik I have read it all before call me something I have never read.