Convicted of manslaughter by provocation 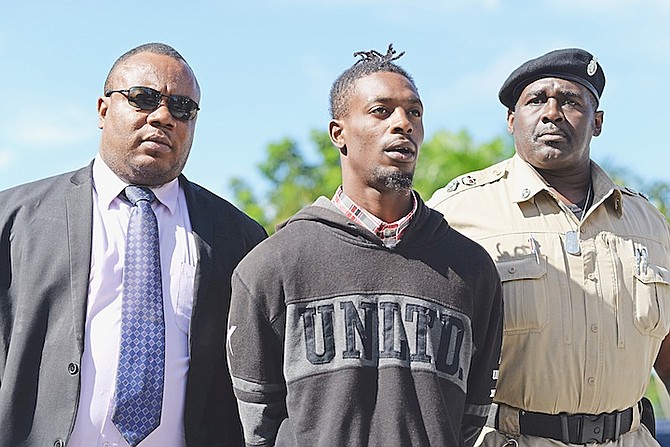 Lamar Albury, pictured at an earlier court appearance, has been found not guilty of the December 19, 2015, murder of Devince Smith. Photo: Shawn Hanna/Tribune Staff

LAMAR Albury cursed in the Supreme Court yesterday within moments of a jury returning a 10-2 guilty verdict for manslaughter by provocation concerning the 33 stab wounds he inflicted on a banker he claimed had made a sexual pass at him.

Thirty seconds after the jury forewoman’s announcement that the 26-year-old was found not guilty of the 2015 murder of Devince Smith but was criminally liable on the lesser charge of manslaughter, the Chippingham resident said: “F* dread.”

Before the verdict was announced, Albury had his head bowed in prayer in the prisoner’s box. He is now scheduled to return to the Supreme Court on Tuesday, March 14 at 11am for his sentencing hearing as his defence lawyer Michael Hanna, waived an initial request for a probation report to be considered by the court.

Mr Hanna had requested a psychiatric report but the request was dismissed by Senior Justice Vera Watkins, who noted that such requests are only made in cases where the death penalty and/or life imprisonment arises upon a conviction for murder.

Albury had denied the murder charge against him.

Smith was a sports coach and was employed at Pictet Bank & Trust Ltd. He was also a former president of the New Providence Volleyball Association.

Prior to excusing the jury to deliberate on the evidence at 1.30pm yesterday, the judge implored the 12-member panel to “disregard any preconceived views you may have had prior to being sworn as a juror.”

The judge stressed that their verdict could not be based on theories, emotion, sympathy, affection, and ill will for either the accused or the deceased.

“If I do not mention something to you in my summation, my failure to mention evidence does not mean it is not important to the case. Your function is to determine the facts,” the jury was told.

Senior Justice Watkins stressed to the panel: “One of your primary functions is to determine who is telling the truth.

“When evaluating the evidence from witnesses, you must take into account their ability to recall the events, the length of time elapsed between the incident and giving testimony, the demeanour or body language of the witness, the ability of the witness to express themselves, the veracity or truthfulness of the witness’ evidence, the interest, if any the witness has in the matter and the integrity of the witness.”

The judge added: “Each of you took an oath to return a true verdict and you must be true to that oath.”

The judge also reminded the jury that Albury had a constitutional right to presumption of innocence according to Article 20.

On the first day of trial, the jury heard that Albury allegedly confessed to his relatives that he fatally stabbed the banker, who had hired him to do a paint job at his apartment for an upcoming holiday gathering, when the victim allegedly made a sexual advance at him.

The second day of trial, Smith’s housekeeper testified that in the three months she had known Albury, the accused had been to Smith’s apartment on three occasions and on two other occasions, the accused and Smith were seen in the victim’s Jeep drinking.

The prosecution’s final witness was forensic pathologist Dr Caryn Sands, who testified that the wounds, which included a slit throat, were unlikely to have been caused by a painting knife as Albury had told police when interviewed in custody 14 days after the incident.

On Monday, Albury was asked by Senior Justice Watkins to indicate whether he would remain silent at his trial or elect to given testimony under oath.

Albury elected to take the stand and spoke of how his accepting a “compliments to the season” Hennessey drink from Smith when he arrived at the apartment before he started the job spiralled into a scuffle and stabbing after the banker allegedly made a sexual advance at him.

When cross-examined, it was suggested to Albury that in his voluntary record of interview in police custody, he made no claim that Smith made a pass at him.

Albury said it was shameful to speak about the attempted sexual assault so he withheld the information.

Albury was asked why were the chairs in the living room overturned if the scuffle occurred upstairs and Smith collapsed at the base of the stairs.

The accused said when he left Smith there, he could not say that he was still alive and that Smith might have overturned the chairs.

Albury conceded that he turned himself in with a lawyer 14 days after the incident. However, he claimed that he hold his relatives what happened the day after and not December 29/30 as the jury heard.

Albury did concede that he burned the clothes he wore on that day.

In closing addresses to the jury on Tuesday, Mr Hanna told the jury that they heard him testify that he was sexually assaulted and that he was taken by surprise.

“He never went there other than to do a job and in the circumstances he was in fear for his life,” Mr Hanna argued.

“We saw no motive of robbery in this matter because he went there at the invitation of the deceased. There was no forced entry. None at all,” Mr Albury’s lawyer added.

Mr Hanna likened what happened to his client during the days of slavery and colonialism, an era “where sexual harassment happened on the job everyday and not just to women, but to men.”

Mr Hanna implored the jury to look clinically and dispassionately at the evidence before them and determine that Albury acted in self-defence.

Cordell Frazier, who has prosecuted the case with Anya Allen, told the jury: “It’s now time for you to decide what and who you believe.”

“By stabbing the deceased the number of times that he did, we say there was no other intent than to kill,” Ms Frazier said.

Ms Frazier reminded the jury that prior to being picked up by Smith to carry out the job at the apartment, there was a conversation between Albury and Smith where the latter had requested of the accused to bring a girl or two for sex.

She also questioned how Albury could bring paint to the apartment if he hadn’t been shown by Smith what he wished for him to paint.

“Did he really go there to paint? That’s a question for you,” Ms Frazier said.

The jury’s deliberation on more than two weeks of evidence heard in the case lasted two hours yesterday.

Albury, who was remanded to the Department of Correctional Services to await sentencing, could face as many as 35 years in prison.