Minnis: It's Okay To Change Your Mind 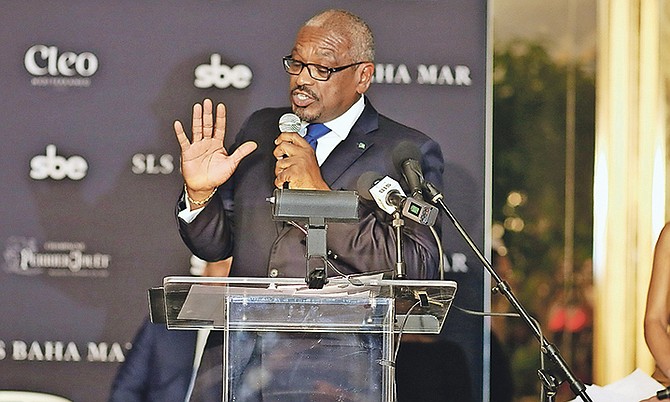 PRIME Minister Dr Hubert has suggested he is not wrong for changing his mind regarding a pay raise for Members of Parliament, adding that correcting the “dire” structure of the public service is needed to change the “unfair” pay scale in the government sector.

“If I am headed out east then somewhere I decide to turn around and head out west, am I wrong?” was the prime minister’s response when The Tribune drew his attention to his 2014 stance against MPs receiving a pay raise, as proposed by the former Christie administration.

His position then was: “As long as I am leader of this country, the FNM would not support any pay increase with all the pain and suffering that is going on in this country.”

However, three years after this rejection, the prime minister told Parliament it was the government’s intention to bring a pay increase for MPs during the next budget cycle. Since then and amid fierce public backlash, Dr Minnis’ Press Secretary Anthony Newbold has seemingly attempted to walk back the comment, saying a raise is dependent on an economic upturn.

Absent from this debate over the last several weeks was further explanation from Dr Minnis, who was questioned about his proposal on Friday night on the sidelines of the opening of the SLS Hotel at Baha Mar.

Earlier in his interview with this newspaper, Dr Minnis said: “Listen to me carefully. We look at things globally. We will have committees that will review the entire public service, public service reform. A part of it will look at the salary scales of each minister, [this is] Members of Parliament, prime ministers, corporations, etc.

“It is unfair and you don’t carry what I [don’t] want you to carry. Carry this. It is unfair for some individuals to be [paid] half a million dollars a year and others getting paid $18,000. It’s unfair. That has to be corrected and that is why you need public service reform looking at the dire structure and correcting it so that individuals will receive what is due.

“At the same time, in correcting [the sector] you look at the placement of individuals to ensure that they are placed in the right position because individuals’ performance are bad, not because they don’t want to work but they are misplaced. So that is all a part of public reformation.”

Earlier this month, Dr Minnis painted the intended increase as a sensible development, especially in light of the substantial salaries the former Christie administration paid some contract workers in the past five years.

“I only want to put the nation on notice that the time has come when individuals are being paid by that government half-a-million per annum, individuals are receiving contracts up to $800,000 and the members of Parliament are being paid $28,000. I want to put the country on notice that at the next budget I will come forward with a pay increase for the members of Parliament,” he said as debate wrapped up in the House of Assembly on a constitutional amendment bill to create an independent Office of the Director of Public Prosecution.

“I will establish an independent committee who will look at the members’ salaries, who will look at salaries for these half-a-million, these $800,000 and these contracts signed a few hours before election, all of that will be reviewed. [The committee will] review all salary structures for government entitles,” he said at the time.

When asked for comment on the planned salary increases moments after Dr Minnis made the announcement, Bain and Grants Town MP Travis Robinson said parliamentarians should make $60,000 to $70,000 per year, likening their current pay to “janitorial salaries.” He said increasing the pay of politicians would help stamp out corruption.

House Speaker Halson Moultrie last week said the Judges’ Remuneration and Pensions Act could be used as a precedent for the establishment of a review committee or commission to bring parity to salaries of those in the parliamentary and executive branches of government.

While he pointed to sections three and four of the act as a benchmark, it is unclear whether he was also referring to the pay scale outlined in the legislation governing judges’ salaries.

According to the Judges’ Remuneration and Pensions Act from 2008 and onward, the chief justice is the highest paid of the judiciary with a salary of $110,000 per annum.

Comrade Prime Minister, here's a fresh thought that head yours.The 'Right honourable' thing is to keep your 2017 election promises. Sometimes best just stay silent cause no words can explain the shi# that spinning around up in that PM wishy washy full funny water head yours. Come next Christmas 2018 - you will be sitting in the backbenches section the House of Assembly, that's if your red colleagues decide be so kind to you.

LOL. This dude must have no intention on being re-elected.

Newsflash Hubert: It is OK to keep your word!

Listen to you two PLP. . ."HE MUST NOT INTEND TO BE RE-ELECTED". . .it is called self-less leadership. . .doing for the people what they need. . .not what you need to get back in office. Ya keep ya word if it is the right thing. . .if your judgement was flawed. . .based on whatever. . .backtracking is wise!! The opposite is said to be the definition of insanity. . ."doing the same thing all the time and expect things to change is the meaning of insane". . .

We had hope. We had nothing left but hope. We know now that that hope was misplaced. Is this way of thinking and talking a big joke on the Bahamian people?

Mister PM, if you are driving out east by yourself for absolutely NO reason, then it is ok to turn around at any point you choose. If, however, you have convinced a bus load of people to go out east with you and they have a purpose or getting on the bus, then you turning around when you please is a betrayal. Those people will likely get off your bus and find another means to their destination. Five years ain too far away.

Comrade JustTheFactsPlease, Minnis is driving more likes a Jitney driver than a prime minister....the Jitney driver does takes you where he first wants go - before he takes you where you needs get to. Now I thinks more about it, sounds more likes how BahamalandAir pilots does fly them planes. Comrade I tell you this, it just isn't Minnis, lots other things about our Bahamaland - is totally fucke#.

Salient points. I am very disappointed in Minnis' comments.

NO ONE CARES ABOUT GIVING MILLIONAIRE MPs A RAISE.

As the CEO/Prime Minister he must be given credit as it must have taken a hellava set of fortitude to come out and say that he changed his mind and likely loose some goodwill stock by this gutsy admission. Prefer anyday to have a politician come out and admit than to have to listen to double talk, moral manoeuvering, beat around the bush, plausible denialibility and any number of attempts to not do what they said. While you may have spent some goodwill you would have also gained some.

Bullshit.. Minnis is in way beyond depth right now - as the FNM Juan Mccartney stated.

Is Minnis honestly suggesting that those MPs didn't get a good chink of those hefty contracts for themselves. Does he really not know how this system works? He can't be that naive.

This man is a stranger to the Truth. He lied, He has changed his mind about VAT of some vital things, about a free tax zone for Bains Town, about BAR Mar and the scholarships free to University of the Bahamas. He was telling lies to win the election he even lied and said the VAT money was missing.

he Has not changed his mind he was telling lies after lies. I could see as plain as day that he was a masterful liar. Old lying doc The Bahamas own Donald Trump. doc can not be trusted

Had PM Minnis first assured the electorate they were imminently about to finally benefit from OUR natural resources, the people would have no problem raising MP's salaries for a job well done!

Doc has so much support out here that yinna don't have a clue how secure he is. . .that's why he can ignore you bunch political jelly fish. . .who now rowing about every "lil" thing. . .all kind of conspiracy theory. . .and now Juan Mc because somebody else told him that he is a journalism light weight. . .not heavy like he believes himself to be! The middle class. . .upper class. . .and the lower are the ones who put governments into power!! Middle, upper and plenty lower classes will not trust the PLP party again. . expect one headed by Brave.

PM Minnis's overall point is correct. A BIG PROBLEM in our government (having worked for several years as an officer in the Churchill building), is the INSANE and wrongful distribution of salaries. It is horrible.

The problem is real and he is right that it needs to be addressed, including for MPs. HOWEVER HIS TIMING IS SIMPLY OFF. Budget stuff doesn't start until July. So this subject could have been left alone right now. It's not the right time to bring it up while people sleeping in their cars and Christmas coming.

Dr. Minnis, respectfully, if you would like to have a patriotic and hard working adviser to work with you to edit press releases and things to go or not go out to the public - i would be happy to help in the interest of making our country better. I did not support you in the election and actually worked hard to prevent you from winning....but you are MY prime minister - as a Bahamian - and as such your success would mean success for every Bahamian including me. Im sure the Tribune would give your secretary my contact if he asked them.

Much like Trump, you are doing the right things - but the good news is being drowned out by the shouting of the bad news...and much of the bad news lies at the feet of the previous admin.

I fear more dissapointment is in store for us Bahamians. Minnis never was cut out for PM. We just wanted Christie out. Bran was the right man for the post.

Minnis is a great guy. He just is not a change agent. I would not be surprised if five years from now the Bahamas is very similar to the way he found it (but more in debt of course).

Minnis is a Chevy truck: stable, reliable etc. We were looking for and needed a Tesla Model 3, however.

Of course it's ok to change your mind. But remember, lots of people will change theirs in 2022.

Reoccurring voice in Minnis's head. Tell me something PM, you've now publicly acknowledge that you're an indecisive east west driver... Does this explain why you're so damn clueless when it comes to how to go about steering a ship of state? i guess we should have seen there were signs in you're red shirts cabinet appoints, government board chairmanships and diplomatic appoints? Did I mention how you threatened to force a sale of Baha Mar, because government had no business being involved in the hotel business? PM, I is goin be a constant in your head, only because you need this Comrade in your head as a reminder of your regime's many mess ups.

My people are so dumb and one-dimensional it een funny. . .plenty form and sooo lil substance! Everybody has the answer for all problems. I hate to say this. . .but I now see why our past 3 PMs. . .if they wanted to get anything done. . .did not take much time and listened to our dins. . .swing us with lil bit of "things". . .and everything is alright!