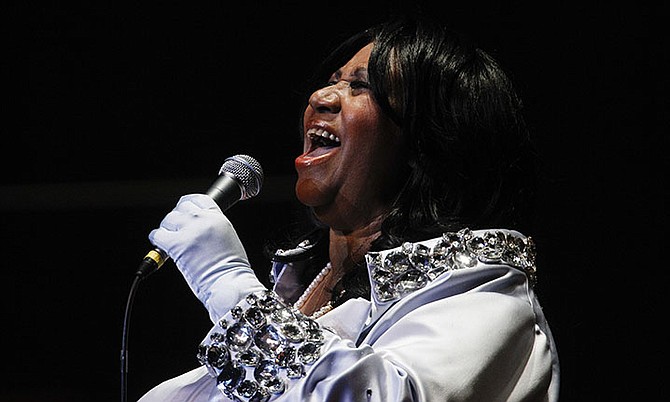 Aretha Franklin performs at The Mann Center for the Performing Arts in Philadelphia in 2010. (AP Photo/Matt Rourke)

NEW YORK (AP) — Aretha Franklin, the undisputed "Queen of Soul" who sang with matchless style on such classics as "Think," ''I Say a Little Prayer" and her signature song, "Respect," and stood as a cultural icon around the globe, died Thursday at age 76 from pancreatic cancer.

She died at her home in Detroit — "one of the darkest moments of our lives," her family said, in a statement released to The Associated Press by publicist Gwendolyn Quinn.

"We have been deeply touched by the incredible outpouring of love and support we have received from close friends, supporters and fans all around the world ," the family said, adding that funeral arrangements would be announced in coming days.

A professional singer and accomplished pianist by her late teens, a superstar by her mid-20s, Franklin had long ago settled any arguments over who was the greatest popular vocalist of her time. Her gifts, natural and acquired, were a multi-octave mezzo-soprano, gospel passion and training worthy of a preacher's daughter, taste sophisticated and eccentric, and the courage to channel private pain into liberating song.

"She was truly one of a kind," said Clive Davis, the music mogul who brought her to Arista Records and helped revive her career in  the 1980s. "She was more than the Queen of Soul.  She was a national treasure to be cherished by every generation throughout the world."

She recorded hundreds of tracks and had dozens of hits over the span of a half century , including 20 that reached No. 1 on the R&B charts. But her reputation was defined by an extraordinary run of top 10 smashes in the late 1960s, from the morning-after bliss of "(You Make Me Feel Like) A Natural Woman," to the wised-up "Chain of Fools" to her unstoppable call for "Respect."

Her records sold millions of copies and the music industry couldn't honor her enough. Franklin won 18 Grammy awards. In 1987, she became the first woman inducted into the Rock and Roll Hall of Fame.

Fellow singers bowed to her eminence. Said Smokey Robinson, who grew up with her in Detroit: "This morning my longest friend in this world went home to be with our Father. I will miss her so much but I know she's at peace."

Political and civic leaders treated her as a peer.  Rev. Martin Luther King Jr. was a longtime friend, and she sang at the dedication of King's memorial, in 2011. She performed at the inaugurations of Presidents Bill Clinton and Jimmy Carter, and at the funeral for civil rights pioneer Rosa Parks. Clinton gave Franklin the National Medal of Arts. President George W. Bush awarded her the Presidential Medal of Freedom, the nation's highest civilian honor, in 2005.

Bill and Hillary Clinton issued a statement mourning the loss of their friend and "one of America's greatest treasures." For more than 50 years, they said, Franklin "stirred our souls. She was elegant, graceful, and utterly uncompromising in her artistry."

Franklin's best-known appearance with a president was in January 2009, when she sang "My Country 'tis of Thee" at President Barack Obama's inauguration. She wore a gray felt hat with a huge, Swarovski rhinestone-bordered bow that became an internet sensation and even had its own website. In 2015, she brought Obama and others to tears with a triumphant performance of "Natural Woman" at a Kennedy Center tribute to the song's co-writer, Carole King.

R.I.P. Great Lady! Your beautiful songs will live on!

May she rest in the bosom of Abraham.