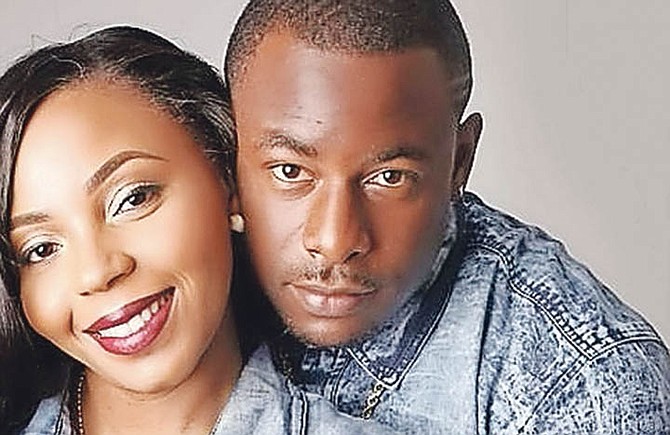 Neil Deveaux, 33, and his fiancée, Ashlee Hilton, 30 were both murdered on Monday. Photo: ICandy Photo Mansion

AN engaged couple were murdered yesterday in an apparent ambush near the general entrance to the Sandilands Rehabilitation Centre in Fox Hill.

The incident, which shocked many who had gathered in the area, reportedly played out as the victims attempted to leave Sandilands following a therapy session.

The male victim was said to be undergoing physical-therapy treatment at the facility following a recent shooting.

The body of one of the victims is removed from the scene outside Sandilands on Monday. Photo: Shawn Hanna/Tribune staff

Responding officers found the man’s body sprawled across a section of the lawn in the northwestern section of the property, and the body of his female companion in the driver’s seat of the car they were driving. EMS pronounced both victims dead at the scene.

While police did not identify either of the victims, The Tribune can confirm that they were Neil Deveaux, 33, and his fiancée, Ashlee Hilton, 30.

They were parents to a three-year-old son. Hilton is a graduate of Queen’s College.

In an interview with reporters at the scene yesterday, Chief Superintendent Solomon Cash said police suspected the couple was targeted by persons in search of Deveaux.

CSP Cash confirmed Deveaux was known to police, referring to him as “one of our prolific offenders.”

Expecting some form of retaliation, police said they would beef up the presence of officers in Fox Hill.

“We believe he came to do therapy, based on the information we are working with thus far,” he said.

CSP Cash continued: “We are getting information that a black, SUV jeep may have been involved in this incident. We have been told that two men emerged from that SUV and they approached the white vehicle and they opened fire on that vehicle. Subsequent to that, the male victim ran from the vehicle and he was chased from these same assailants who opened fire on him, subsequently shooting him.

He also said police were uncertain how many times Deveaux was shot.

“We know that it was a handgun that was used, based on the firearm evidence found on the scene,” CSP Cash added.

Responding to further questions from reporters, CSP Cash revealed that the male victim was gang affiliated and that his death could have been an extension of his involvement in some other activity.

“We suspect, based on the profile of the victim, that it could be some form of retaliation against the male victim,” CSP Cash said.

Family members of the male victim, who were at the scene, confirmed that he was “troubled.”

His father, George Deveaux, said he spoke with his son just hours before his death, but had no idea that it would have been their last conversation.

Mr Deveaux said his son was incarcerated some 15 years ago, adding that his son’s time behind bars left quite an impression on him.

“He was changed after that. He was young when he went in. He was different when he came out.”

Moments later, Mr Deveaux could be heard saying: “That prison tough on these young boys. That is make them criminal. Like how a bakery is make bread…. Yea, that prison is make them.”

In addition to Mr Deveaux, several other family members and friends of the victims showed up at the scene over the course of the two and a half hours that it took police to conduct their initial investigation.

Many of them who showed up appeared shocked in disbelief. A few had to be consoled by others.

CSP Cash said police would increase patrols in and around the Fox Hill community, where Neil Deveaux  reportedly lived.

“We suspect, based on the profile of the victim, that it could be some form of retaliation,” CSP Cash said. “Based on what we are working with, is that the victim is connected to the Fox Hill area and we will be looking at that particular area; looking at the associates of the victim and also those persons who came to our attention who may be persons of interest for perpetrating this crime.”

Following the incident, Sandilands Rehabilitation Centre suspended services for the remainder of the day.

I think it is kinda obvious that this was a hit. The police need to question who they went to visit!!!

Do you read???? He went for physical therapy...it didn't say he was visiting anyone.

What Court case and what was the witness suppose to report on and who???

realize that this happened two steps from the prison

When a shooter can walk up to a vehicle (not in this case) loaded with three or four occupants and shoot their target multiple times without injuring anyone else, that person is no stranger to guns or killing.

Next week the police will issue a statement to tell us how crime is down!

Moments later, Mr Deveaux could be heard saying: “That prison tough on these young boys. That is make them criminal. Like how a bakery is make bread…. Yea, that prison is make them.”

I think it is best if we leave prisoners in prisons until they die. I certainly don't want ANY of them released!

"The male victim was said to be undergoing physical-therapy treatment at the facility following a recent shooting." Sounds like he led a fruitful life...

The Privy Council fron another sovereign nation ....thousands an thousands of miles across an ocean should not be able to persuade...any Bahamian of this sovereogn nation.....specially those proidly wearing da Bahamian flag...on their suit front......that the Bahamian death penalty is basically....unemforcable....on dis lil small 21 x 7 mile island....where murderers gets paid for accomodations in prison....an for good behaviour can come out in a dozen or so years.....bucking up on victims families........AND.....now people realizing dis meting out own justice causing...instibility....fears....tourists warnings....country internationally scandalized bevause of these evil happenings...we needs to have govt wid majority seats.....make own Bahamian Court of Appeal final Court...have the Commission of Mercy to sorry for some......An make options of Death by other options like injection.....we cannot hav all hell to break loose on dis one small tiny 21 x 7 island....chillren doing homework gettin shoot....pregnant women gettin shoot...police gettin shoot......police all over da place... .....!!!

Thanks Dawes. ....Yes the public strongly suspects what is going on......even the criminals too it seems....thats why the nation has homicides as the leading cause of death.....foreign nations who we depemd on for life giving sustaining tourism have issied warnings.....more importantly it has affected innocents and all Bahamians who are fearful....no gold jewellry.......massive sSecutity cameras....razor wire...impacted GDP...politicians have to make impactful decisions on the Death Penalty.....instead of the usual hot air rantings..to get votes which the public done knows....

Your are absolutely right. . .they put the ball into our court. . .we just een hitting dat ball back!!

An attempt to bias how we view the victims...i.e. good girl gone bad...good girl who got caught up with the wrong fella etc. For all we know she may have been knee deep in nefarious activities. The school she went to doesnt matter.

I thought the school reference was odd too. But for all we know she was a good girl who got caught up with the wrong man. People who knew him said he was troubled, the police have said they "knew" him, no one has claimed to "knowing" her so don't put that on her just so

Rip to them both

Sounds to me like he was a bad boy and either she was a bad too or she chose the wrong one and paid with her life. Now a young boy is an orphan... sad sad.

"He was changed after that. He was young when he went in. He was different when he came out.” ......... He was treated like an animal in Fox Hill Prison, and came out less than an animal!

This guy simply reaped what he sowed. Violence begets violence. No other way to put it.

Maybe you and the daddy right. Violence was done to him in prison and it begat violence.

I remember being on a bus one day over 20 years ago and this loud boisterous bum looking guy got on the bus. Everyone had been quiet but he kept making a nuisance of himself,cursing and carrying on. Then he made a statement, I just get outta prison! Then he got quiet quiet and said in a small voice, prison een no place to be, it een no place to be. You have to wonder what happens to a young boy who enters that place whether they deserve to be there or not.

Many innocent young men are 'known to police.' And many of them don't have a criminal record. Not saying this is the case in this instance. The police keep picking them and putting charges on them or until they, become, Known to police.' The trend now is also to charge them with assaulting a police officer, so when the other charges don't stick....

What was the purpose of emphasizing that the female victim who is approximately 12 years out from having graduated high school was a former student of Queen's College? What does that add to the story? What school did the male victim attend?

The reference to "Queens College" doesn't, and cannot possibly add anything to the story except a reference or some identity to the female victim.

Those guys weren't there because of something she did. Maybe that's what it means

This should become a standard practice now .......... Identify in the news story, the school that every criminal and crime victim graduated/attended ........ SMH

So is the police statement saying it’s ok to murder someone, that has a criminal record, in broad daylight, and also KILL, anyone who happens to be with them at the time of the execution, and also anyone, including family, that has association with this individual? Houston we do have a pry!

And NO, it’s not about bashing the police or the police force. But you cannot fix society or the crime problem unless you also fix the police and the police force and the judicial system and the correctional system. When two citizens are murdered in broad daylight and the only statement from the police is ‘the victim was known to polic.. one of our prolific offenders... and the female lost her life associating with him., that officers or spokesman needs his batteries charged! Murder is murder and the death penalty is not in effect.