Mr Gray said in a voice note circulating on WhatsApp that the Ministry of Works is: “Putting together who can qualify for contractors and who can’t. . . and you can only qualify if you have a four-storey building under your contractor’s belt.”

In response, Mr Bannister said there is no government that can match the record of support that the Free National Movement has provided for small contractors.

The minister said: “The allegations made by Mr Gray are untrue and entirely without foundation. 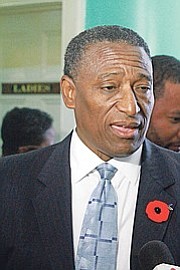 “For those like Mr Gray who may have conveniently forgotten, or who may have been asleep in Parliament, the Construction Contractors Act was passed under the blundering and disastrous PLP administration. The restrictions contained in the bill were voted on and passed unanimously by Mr Gray and his colleagues.

“The untrue allegations voiced by Mr Gray in his statement about the current administration are figments of the imagination of a failed candidate who one year after being dismissed by the people appears to have developed a severe case of Parliamentary amnesia and foot in mouth disease.”

In his voice note, the former MICAL MP said, based on his information, if a contractor is not a “Mosko or one of them big brothers, you may not be able to soon qualify as a contractor.”

Mr Gray also urged small contractors to fight for their rights before the bill heads to Parliament, claiming the government is “seeking to put the small man out of business.”

The Tribune contacted Mr Gray for an explanation for his remarks, but efforts to reach him were unsuccessful.

Mr. Grey ought to know dat during his administrations last go ....the ppre taxpayers paid heavily as it was replete with construction disasters.....running in the hundreds of millions of dollars to pore sufferin xmall man taxpayers....projects costing more than original price....some projects just had to be abandomed....one just had a half of a mountain in Eleuthera graded leaving one big hole .....baseball park....water treatment plant...seawall GB...etc