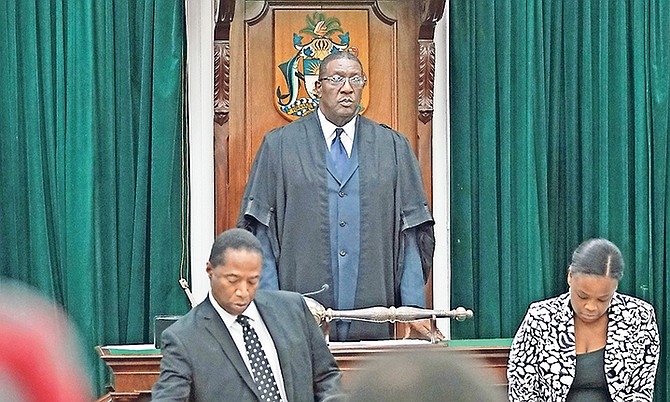 This story has been updated HERE.

SEVEN days after his controversial comments helped push policy debates in the House of Assembly to the sidelines, House Speaker Halson Moultrie apologised on Wednesday for his attacks.

His apology came after the governing party passed a motion affirming its confidence in him as Speaker, having amended the opposition’s earlier resolution that sought to declare no confidence in his leadership.

Twenty-six MPs supported the FNM’s affirmation of confidence in the Speaker, four voted no, seven were absent and one abstained from the vote.

Ma Comrades @ Tribune, "after winning vote" - mean win in like holding a majority of 34 voting House red MP's against 4 voting PLP MP's,,,, a House seat majority that played kiss-up the House Speaker - whilst a non-government funded Soup Kitchen was in the process feeding some 200 Freeporters on the sidewalk at the West Mall Shopping Plaza in downtown Freeport...all taking place without a single MP from Freeport present. {This is hungry in Freeport reality - not made up}. Question: During the lunch recess - did the public purse pay to feed free lunch (SOUP ONLY) to the 34 red MP's and House Speaker - whilst Freeporters turned out Soup Kitchen?

The persons aggrieved still have no confidence in the speaker. His statement after the vote further demonstrated his lack of grace and decorum. Poor big dumb man. Was concerned for a moment, Marvin, that he was an ex police.lol

The replies in favour of following the amended version no confidence motion to unseat the Comrade House Speaker - were nothing more than the party's bias opinion statements from the red MP's and since no votes were taken from their various constituencies - they were out order to suggest that their respective constituents shared their opinions of the House Speaker. Did you not notice how PM Minnis left it to his most' junior ranking of red House MP's' to do the praising the Speaker? Minnis was more concerned letting the House members know upfront during his statement that he was out there by 7 0'Clock sharp - so best get too long winded in ya praises the Speaker.

So, that ungracious, hubris-filled, drivel, is his version of an apology?

The FNM members have stooped to a new low by blaming the controversy on the PLP they are suppose to be grown ups. The speaker says he is a minister of the gospel , He has brought reproach, to many bitter words came out of his mouth. Mr" speaker bitterness starts in the heart.

Grown ups accept responsibility for their actions. small mean spirited people do not.