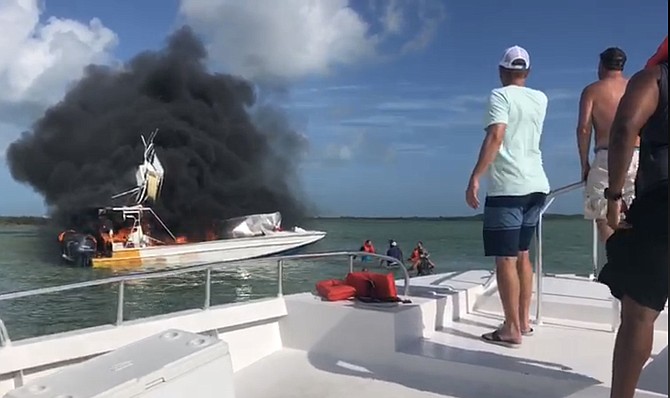 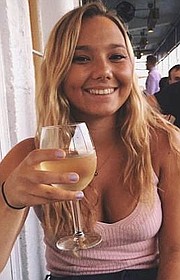 Stefanie Schaffer lost both legs in the accident.

EXUMA’s largest tour operator, Four C’s Adventures, has been issued a cease and desist order to suspend operations pending an investigation into the accident that killed one American woman, caused another to lose both of her legs and injured nine other people on Saturday, according to outgoing Transport and Local Government Minister Frankie Campbell.

Four C’s Adventures received the order on Sunday evening despite opening for business that day. The order was issued by the acting controller of the Port Department in conjunction with the Exuma Port Authority Board.

“I don’t want anyone to interpret the fact that we asked the company to cease and desist its operations as any indication of a conclusion to the investigation,” Mr Campbell said at a press conference. “It’s normal procedure. There are a number of other vessels the company owns. It’s prudent to ensure everything is in order, that we can assure and guarantee safety as we move forward.”

“I don’t want to comment at all because right now I’m in the middle of this whole thing and I have legal counsel,” he said.

Mr Campbell gave few details about the investigation and would not say if the operator had liability insurance, up-to-date inspection certifications or if the commander of the vessel, Captain Ron Watson, had the requisite captain’s licence.

He could not say how long the investigation may take, but noted it is headed by registered port inspector and surveyor Captain Cyril Morley who travelled with a team of police officers to Exuma to conduct the probe.

Among the matters that will be investigated, Mr Campbell said, are the procedures undertaken by the Exuma Port Department office following the incident.

“I am unaware of what the police report stated but I’m sure the social media images would’ve revealed that the engines weren’t affected as part of the explosion but I wish not to speculate about what may have happened,” he said.

The vessel had just left Smith Creek, Stuart Manor when the accident occurred. The half-day tour was to cover three cays, culminating in a visit to Big Major Cay, home of the famous swimming pigs.

The vessel, Mr Campbell confirmed, was home-built and had two Yamaha engines.

“I’m aware that the family is a boating family and they have built a number of boats right there in Exuma,” he said. “Home-built boats have been around for some time. I worked in Exuma in the early 90s as a police officer and from back then the Smith’s family has been involved in building boats. To my knowledge and recollection this is the first accident of this kind. I don’t want to speculate that the accident is a result of the fact that the boat was home-built. It can be so many more causes. The investigation will reveal the cause.”

Mr Campbell said notwithstanding the weekend accident, the Port Department has been working with the Bahamas Maritime Authority to create and enhanced inspection regime for mailboats, cargo vessels, ferry boats and tour boats in the country.

The woman killed Saturday has been identified as Mrs. Maleka Jackson. According to a report by ABC news, she was celebrating her 15th wedding anniversary with her husband, Tiran Jackson when the accident happened. Before dying she told a rescuer that she had a 10-year-old son.

Mr Jackson was, up to Monday, in the Intensive Care Unit of Princess Margaret Hospital with both his legs fractured. In a statement yesterday, the Public Hospitals Authority said a man in the ICU was airlifted to Broward General Hospital in Fort Lauderdale, Florida. Arrangements are being made to airlift the remaining two women patients at PMH to the US, it added.

One woman from Vermont, Stefanie Schaffer, 22, experienced double amputation of her legs. Her family has launched a GoFundMe account that has already exceeded its initial goal of raising $50,000. Up to press time last night, loved ones had raised $65,743 to cover medical and travel expenses for the family. Ms Schaffer was on the boat with her mother, Stacy Bender, who sustained multiple broken bones and internal injuries, as well as her stepfather, Paul Bender, who suffered bruises and cuts. Her sister Brooke Bender, 13, also had bruises and cuts. On the page, the family said Ms Schaffer requires surgery on her spine for an L1 lumbar disc fracture while Mrs Bender requires surgery for her fractured legs. According to a report by the Daily Mail, Ms Schaffer was a dancer who “danced her whole childhood.” The newspaper said it spoke to a relative of Ms Schaffer who described her as a “very outgoing” dancer who recently graduated from college.

“The scary thing is Stefanie doesn’t know that she’s lost her legs, and that’s what really upsets me,” the relative told the newspaper. “She’s going to wake up from this coma and realise ‘I don’t have any legs.’ It’s breaking my heart.”

Meanwhile, the status of the four people airlifted to a hospital in St Petersburg, Florida remains unknown.

Prime Minister Dr Hubert Minnis yesterday expressed condolences to the families affected by Saturday’s accident. “I don’t want to say anything on that matter at this time because it’s an active investigation but we regret the tragedy,” he said.

I think all tour boats operations in Exuma should be issued this order also until their water craft are proved safe. The fact that there wasn't even the most basic safety equipment on board the ill fated boat including the surrounding vessels is a strong indicator of an indemic problem. All such vessels should be inspected to ensure they meet the appropriarte code such as NFPA and until they do all such vessels not be allowed to operate. Until such actions are done things will be right back to normal in a few weeks

Not just Exuma! All of the Islands offering these tours should be under strict regulations that are enforced. Down to the cleaning of the snorkeling equipment. Adequate life vests. People pay a lot of money for a couple of hours of fun. To think that they could die just because the companies are cheap and regulations are not enforced. I wonder how many articles that I have read talking about how cheap the tourist's are when it comes to what they spend on the Islands. When simple safety rules aren't being followed. It's really sad for the victims of this accident.

My heart goes out to Stefanie. She should soon own a Exuma Cay for her compensation

I think you should all calm the f**k down and await the results of the full investigation.

Accidents happen everywhere. People die in those accidents everywhere. Tragic as these deaths are, they are no different to the deaths that happen all over the world in similar circumstances every day.

How one can immediately jump to the conclusion that all boats operating in the Bahamas are unsafe when they have operated for decades every single day without incident, is just beyond all logical comprehension.

Because we keep harping on the fact that our Government agencies are SLACK at enforcing the LAW ......... and our people are SLICK at getting around legal procedures .......... as far as the "investigation" goes ......????

If it is true that they did not have insurance (and this can be found out within minutes), then there are serious issues at play, including a complete lack of enforcement of any rules. Yes this may well have been an accident, but there is a good chance that whatever the laws governing being in this business was not being followed, and there was no enforcement of these laws by the Government.

while this may be a legitimate accident, there is no doubt in my mind that an objective investigation would uncover glaring deficiencies ranging from the adequacy and currency of the the regulations, to oversight, enforcement, training and certification, emergency response procedures, etc., etc. All 3rd world countries are good at saying what is wrong AFTER things happen but seemingly impotent to proactively institute requirements that would prevent or at least mitigate the impact when things do inevitably go wrong.