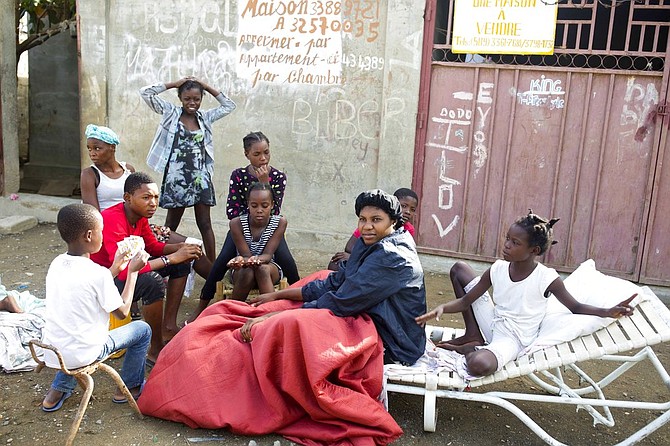 Residents gather outside their homes after a 5.9 earthquake that hit Haiti over the weekend, in Port-de-Paix, Haiti, Monday. Thousands of people along Haiti's north coast dragged mattresses and chairs outside, fearing new aftershocks. Many wondered how they were going to rebuild from Saturday night's quake and a strong 5.2 magnitude aftershock on Sunday that had residents in the coastal city of Port-de-Paix and elsewhere worried about returning to their cracked cinderblock homes for fear they would collapse. (AP Photo/Dieu Nalio Chery)

PORT-DE-PAIX, Haiti (AP) — The death toll from a 5.9 earthquake that hit Haiti over the weekend rose to 15 people with 333 injured, authorities said Monday, as thousands of people slept outdoors fearing aftershocks would topple their cracked homes.

Haiti's civil protection agency said it will soon deploy 70 soldiers to the Nord-Ouest and Artibonite provinces that were hardest hit, noting it already sent 14 soldiers along with nurses and doctors to the area.

Among them was Marc-Sena Docteur, a 24-year-old carpenter whose girlfriend died in the earthquake.

The walls of the room that the couple had been renting for a year collapsed, and he and the baby have been sleeping outdoors since the quake.

Sunday's aftershock caused panic on streets where emergency teams were providing relief to victims. The U.S. Geological Survey said the epicenter of the aftershock was located 9.8 miles (15.8 kilometers) north-northwest of Port-de-Paix, which is about 136 miles (219 kilometers) from the capital of Port-au-Prince.

On Monday, Haiti's Ministry of Communication released figures stating that at least 15 people had died, nine in Port-de-Paix, one in Saint-Louis du Nord and 5 in Gros Morne. Among the dead were a 5-year-old boy crushed by his collapsing house.

Impoverished Haiti, where many live in tenuous circumstances, is vulnerable to earthquakes and hurricanes. A vastly larger magnitude 7.1 quake damaged much of the capital in 2010 and killed an estimated 300,000 people.

Etanvie Dimorne, a 50-year-old mason, said people have to rebuild stronger given the earthquakes that have hit Haiti. He lost his home in Saturday's quake and is now sleeping under a tarp in someone's yard.

"Last night it rained," he said. "I have to sleep under difficult conditions."

President Jovenel Moise urged people to donate blood and asked international aid agencies to coordinate with local agencies to avoid duplicated efforts. The government did not provide an estimate of the damages.

The quake was felt only lightly in the capital, as well as in the neighboring Dominican Republic and in eastern Cuba, where no damage was reported.

In Haiti, officials have struggled to shore up buildings despite the two major fault lines along Hispaniola, which is the island shared with the Dominican Republic.

Pierre Jacques Baudre, a farmer and father of seven, said he was afraid to return to his home after one wall built with rocks and cement crumbled.

"The house can fall at any time," he said.

I am really trying to fathom the reasons/logic these Haitians exercise. Why if you can't take care of yourself, what under God's blue skies inspire you to have 5,6,7 + children then expect others to come and assist you and all of yours when the shit hits the fan !!! But tgen again we have empty headed girls here breeding like rabbits as well. This mindset baffles the hell out of me .🤔

@rawbahamian, that's a great question! Why do people continue to have children when they are clearly unable to afford them? When former MP Richard Lightbourne scolded Bahamian women for that practice, most took offense. He was correct....... if you can't afford to take care of yourself or your children then you really should not have them.

Number of reasons...... 1. Religion .....abortion...??..Righrs...?? 2. Govt.......lack of Family planning education. 3. Culture.....Restavik - Haitian ....parents unable to care for children ....seeking better lives for children....can send them to be raised by others... 4. Economics....actually cases of women with a number of children .3??..different fathers ...contributing ..financially 5.Political..Nationality...political encouragement ... Opportinity....Free Education to all....regardless of nationality status.....to improve lives of family..."Anchor babies'....whether Bahamians having babies abroad....or Illegal Migramts having babies in the Bahamas given ease of free Edication and ease of ducking Bahamian authorities... 6.Socio economic 7.Territoroal imperatives... 8.Component of Country's economics to have many citizens send back currency from abroad.... .......many opportunities for govts to act on ....not a new area...which has been studied way back even before Malthus on population.....