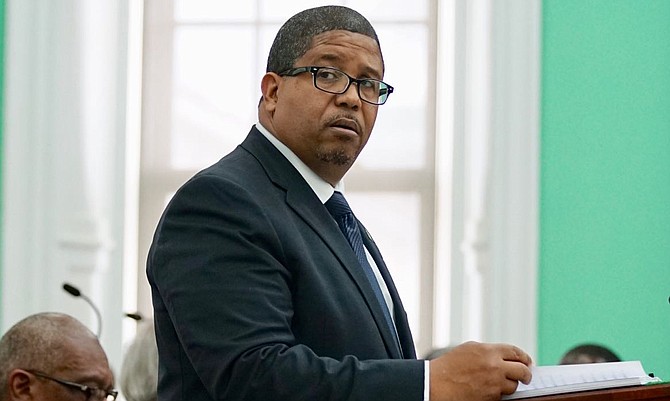 The meetings, which are arranged over a three-week period, represent the start of an intensive, interactive consultative process with key stakeholders -- government financial staff -- that will culminate in the complete revamp of the Financial Administration and Audit Act (FAAA).

Speaking at the seminar's opening ceremony yesterday, Finance Minister and Deputy Prime Minister K Peter Turnquest said through the initiative, officials will facilitate the critical review and drafting exercise for the bill.

Mr Turnquest has said the bill could be introduced to Parliament as soon as next week.

That is in line with his indication that the Fiscal Responsibility Bill, another of the touted public finance management bills, must be "top of the docket" when the House of Assembly resumes on September 19.

The East Grand Bahama MP yesterday said the government, in its continued push toward the modernisation of the public service, has made it a priority of the Ministry of Finance to shape a new culture of transparency and accountability in public finances.

"The Public Financial Management (PFM) Bill will do just that," he told those in attendance, "along with the soon to be enacted Fiscal Responsibility Bill, and proposed Public Debt Management Bill and Public Procurement Bill."

For much of the summer, Mr Turnquest has talked of the Minnis administration's plans to completely overhaul the country's standard metric of public finance management and reporting.

Moreover, he said the legislation will reinforce the government's commitment to the promotion of efficiency, effectiveness, accountability and comprehensive financial reporting, while also bringing the country in line with international best practices governing public financial management.

"In reality, our current legal framework for public financial management is outdated and inadequate to meet the demands of good governance," he said. "Pushing forward with this major legislative overhaul is, therefore, a must."

He continued: "Some of you may recall that during the preparation of the Fiscal Responsibility Bill, numerous shortcomings were identified in the FAAA.

"Because of the need for extensive revisions, we made a decision to replace the FAAA with a more modern and appropriate legislation, which will be the ultimate result of this process:

"A PFM Bill that aligns with standards such as the International Monetary Fund Regional's Code of Fiscal Transparency; and is supportive of the other body of legislation aimed at securing the proper management of the country's public finances and promoting fiscal discipline."

Mr Turnquest said the PFM bill will help to develop a new institutional and regulatory framework for managing public finances.

He said the bill would aim to provide the coherent legal framework necessary to support the broader introduction of the Integrated Financial Management Information System, inclusive of process improvements that will strengthen accountability, oversight, management and control of public funds.

"In a material respect, the PFM Bill will seek to: enhance, clarify and adequately specify the roles and responsibility of persons/positions entrusted with management and control of public funds, assets, liabilities and other resources; build out provisions related to financial management, including the requirements for the preparation of cash flow forecasts and enhance adequacy of reporting provisions, especially in-year reporting of fiscal information."

Mr Turnquest said the PFM law, when introduced, will set new standards and hold civic servants, to a higher standard of accountability, including those elected by the people.

He added: "No matter how bad it is needed, the change, progress is often a difficult one. But I have every confidence that the changes we are proposing are the kind we can all get behind and support."

"The Bahamian public deserves a government that understands its responsibility to be accountable. To fulfil this obligation, we need the tools to support our work, and the legislative reform is all about that. These changes will create tools for you to use, for us all to use, to serve the Bahamian people better.

"This project is important for the Ministry of Finance and the government, at large," he said.

CARTAC, which is one of ten IMF Technical Assistance Centres, works to help countries strengthen their human and institutional capacity to design and implement sound macroeconomic policies that promote growth and reduce poverty.

The unit, over the course of the review and drafting process, will be represented in The Bahamas by its legal consultant, Lynne McKenzie, who drafted the initial Public Financial Management Bill, and CARTAC's public finance management adviser, Bruce Stacey.