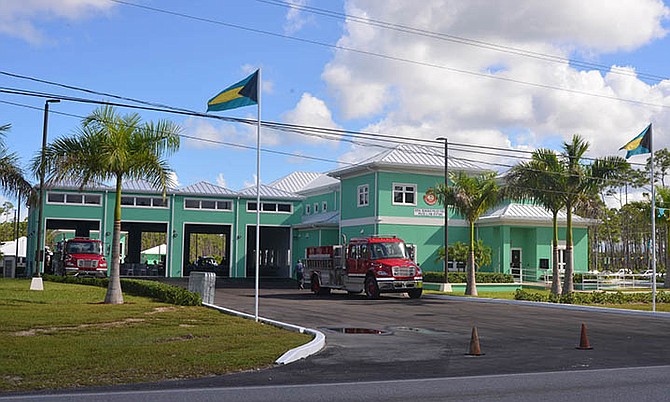 The state of the art facility has been named in honour of the late Albert J Miller, former Deputy Police Commissioner and Grand Bahama businessman.

The 22,000 sq foot complex is built on three acres of land donated by the Grand Bahama Port Authority Authority (GBPA), where Sir Albert had served as a co-chairman and president for three decades.

Minister of National Security Marvin Dames and Police Commissioner Anthony Ferguson attended the opening. Also in attendance were Sir Albert’s children Russell and Tony Miller and Debbie Archer along with their spouses.

The old fire station on Settler’s Way was destroyed by the hurricanes in 2004 that struck the island, leaving firefighters without a facility of their own. The fire team was relocated to cramped quarters at the Police Canteen where it has remained for the past 15 years.

Prime Minister Dr Hubert Minnis said Sir Albert was instrumental in ensuring property for a new facility was donated by the Port Authority.

“I am especially pleased to be here at the inauguration and dedication of this state of art police and fire station named in honour of the late Sir Albert Miller, a great Bahamian who made tremendous contributions to nation building and to Grand Bahama,” he said yesterday during the ceremony.

He noted that Sir Albert rose through the ranks of the Royal Bahamas Police Force to become Deputy Commissioner of Police.

Sir Albert served 28 years on the police force before leaving to join the Grand Bahama Port Authority, where he also moved through the company becoming president and later co-chairman. He retired after more than 30 years at the GBPA to run his private businesses. He died August 18, at age 89.

Dr Minnis added: “He left us with a great legacy of community and government partnership. Let us cherish his tremendous contribution to this country and Freeport.”

The prime minister noted that the facility, which is strategically located to respond to emergencies, is a demonstration of the government’s commitment to ensuring the RBPF is well equipped to serve, protect and defend citizens.

“I am sure that residents of the northeastern GB are elated about this major accomplishment which marks a significant milestone,” he said.

Dr Minnis said the quality of life of citizens in GB, safety, and security are of paramount importance, and it is vital that the facility is staffed with trained and efficient officers.

“I am pleased to hear that crime, including the number of homicides, is trending downward," he said.

"We owe a debt of gratitude to the leadership and to the men and women of the Royal Bahamas Police Force for their dedicated fight in protecting their fellow citizens,” he said.

Minister Dames, who had initially served in 2009 as ACP in charge of Grand Bahama, said that the ultra-modern complex would significantly improve police services on Grand Bahama.

He stated that it would serve as a dual-purpose complex, a police and fire station, and noted that some 34 new fire recruits would be stationed on Grand Bahama.

Mr Dames said the Fire Branch had endured substandard conditions for many years on Grand Bahama.

“I am pleased that the hard-working and industrial officers of the Fire Branch are finally able to leave substandard conditions that they have had to endure for so many years and to be now able to move into a modern facility to service the needs of the northeastern Bahamas, and by extension the entire island of Grand Bahama,” Mr Dames said.

In an emotional address, Russell Miller thanked the government for naming the facility in honour of his father, who did whatever little he could to help his fellowman.

“From his humble beginnings in McCann, Long Island, through the ranks of the RBPF, to the opportunities he had ventured here in Freeport, Grand Bahama, our father determined that his work will tell the story of his journey,” Mr Miller said.

“He wanted all Bahamians, particularly young Bahamians, to have the opportunities to fulfil their dreams. Simply put, Albert Miller wanted to make a difference.”

Mr Miller stated that no matter what his father did, no matter how big or small, he was fully cognisant of the lives he would have impacted by the steps he took and the decisions he made.

There was a blessing of the building, plaque unveiling and ribbon cutting of the new complex followed by a tour of the facility.

Mr.: Russell Miller said "No matter what my Father did big or small he was fully \ cognizant of the lives he would of impacted by the steps he took and the decisions he made". Say that again Mr.: Miller&gt;

That project was the PLP project, they didn't live to see it open, nothing to do with the current government or their spending, except for the furniture. It was finish for almost 2 years, the idiot contractor made the entrance doors for the fire trucks too small for them to get inside, then the furnishing took forever. One of the few good things they did for grand Bahama.

Who did you say contracted the idiot?

Please don't tell me NIB paid for this too!

This was probably in place before they gained office. I saw no mention of this construction in their budget.