INSIGHT: An old ally, stuck in the wilderness, looking for friends 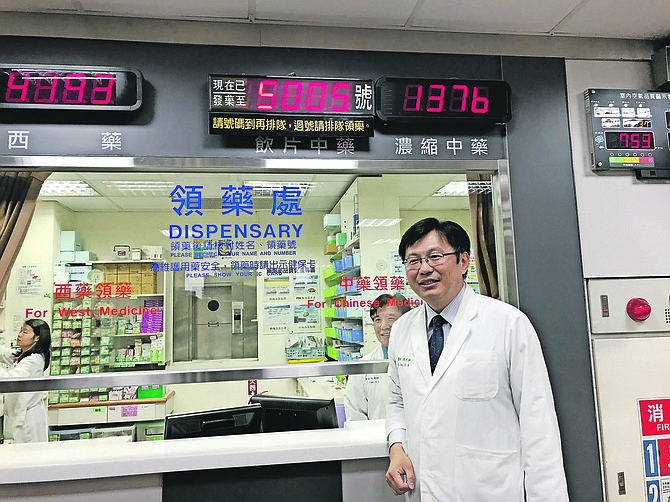 “At this moment it’s not possible for us to go into the Bahamas,” conceded Dr Timothy Hsiang, Secretary General of Taiwan’s International Cooperation and Development Fund (ICDF).

He was addressing a visiting press contingent from eight European countries, the US and a single journalist from The Bahamas.

The invitation represents the country’s tireless commitment to maintaining and steadily increasing its international profile - despite having lost more than a dozen allies this term due to Beijing’s strategic and aggressive tightening of its One China policy. In earlier years Taiwan and The Bahamas had a formal relationship, but that no longer exists.

Earlier this year, Chinese President Xi Jinping said the mainland will strive to achieve peaceful “reunification” but reserved the right to use force to bring Taiwan under its control.

For its part, Taiwan president Tsai Ing-wen has not backed down on her pledge to promote the country internationally in the face of China flexing its political and military prowess.

Despite this aim, however, last year, the Dominican Republic, Burkina Faso and El Salvador all dropped Taiwan for diplomatic relations with mainland China - a move Dr Hsiang attributed to China’s promises of economic support, something Taiwan cannot match.

While it is a minnow on the international stage, the ICDF does have 60 ongoing projects in 20 countries across sectors of agriculture, education and public health.

“I don’t think China will be happy to see us do projects in those countries (that have diplomatic relations with Beijing),” said Dr Hsiang.

“As a development agency we like to join with any countries...but we need an MOU. Our public health projects go through government channels to make the project possible.”

Larger countries, like the United States, have historically been able to nurture informal relationships with Taiwan in tandem with formal diplomatic relations with the mainland. However, the issue of Taiwan features prominently in the current US-China trade dispute.

Last week, Time reported the sale of 60 jet fighters to Taiwan has been sidelined until the United States seals a trade deal with China. The sale of the jets represents the Americans’ long-standing statutory obligation to help Taiwan defend itself in its standoff with mainland China.

It plays out against increasing cross-strait tensions with reports of “reckless and provocative” flights by two Chinese fighter jets into Taiwan’s airspace last week.

Last month’s press trip took journalists on a week-long tour through Taiwan as government officials spun their narrative on the critical nature of Taiwan’s exclusion from the international stage - most importantly the United Nations and the World Health Assembly - where it is desperately trying to regain access through observer status.

Paired with breathtaking excursions featuring rich Chinese culture, as well as medical health advancements, officials painted a picture of a tiny island’s struggle to maintain its self-governance and recognition of its efforts to meet and surpass international development goals.

An interesting feature of their health system was the widespread standardisation of traditional Chinese medicine - its hospitals boast international partnerships for clinical trails that have netted remarkable results in the integrated treatment of cancer and chronic diseases.

Journalists paid visits to technology centres and cultural sites during their trip to Taiwan.

It could prove to be a useful model and encouragement for the Caribbean’s pursuit of mainstreaming its own plant-based natural “bush” medicine.

Taiwan’s cause was at one time championed by The Bahamas during an eight-year diplomatic relationship that ended unceremoniously following the opening an $80 million container port in Freeport, partly owned by a subsidiary of Hutchinson Whampoa Ltd. The investment dwarfed the economic value of Taiwan’s efforts in the country over the course of diplomatic relations, according to pundits.

The policy shift was awkward to say the least, as the Bahamas had just eight months earlier lent its support for the establishment of a special committee to review Taiwan’s appeal for inclusion at the United Nations.

The Republic of China (ROC) on Taiwan joined the United Nations as a founding member on October 24, 1945, and served as a charter member and one of five permanent members of the Security Council until 1971. That year, the international body voted to admit the People’s Republic of China and expel the ROC.

The Bahamas’s eight-year connection with Taiwan was filled with sizeable charitable donations to local non-profit organisations, technical cooperation in agriculture inclusive of the establishment of a training programme to support a conch jewellery industry and a $10 million loan.

By 1995, more than 50 Bahamians had participated in training courses in Taiwan from various professions.

A joint communique marking the establishment of diplomatic relations between mainland China, run by the PRC, and The Bahamas was signed on May 23, 1997.

The move was also harshly criticised by House Speaker Halson Moultrie, then leader of the Bahamian Freedom Alliance.

In a letter to the editor, dated May 24, 1997, Mr Moultrie called the FNM administration’s handling of the split with Taiwan “a travesty of diplomacy”.

Insisting the best interest of the country would have been to recognize mainland China while maintaining a friendship with Taiwan, Mr Moultrie said instead it appeared the government was “selling favours” by opting to “squash the ant to please the elephant”.

Mr Moultrie declined comment when asked by The Tribune for his current position on the One China policy due to his neutral position in parliament, but underscored his position on the Ingraham-led administration’s handling of the matter was unchanged.

In his 1997 letter, Mr Moultrie pointed to Taiwan’s technical assistance and contributions and questioned the strength of diplomatic ties with other small countries like Haiti and Cuba “when our allies and friends can be so flippantly discarded”.

However, when addressing opposition criticism in parliament the following month, then-Prime Minister Hubert Ingraham accused Taiwan of threatening the country over its decision to sever ties.

Mr Ingraham said the Taiwanese government, in an interview with the Financial Times of London, had said they would “teach the Bahamas a lesson”.

During a fiery exchange with then-opposition leader Perry Christie, Mr Ingraham rebuked criticism the Bahamas had not found a way to allow the Taiwanese government to “save face” as shameful.

Mr Christie clarified his criticism was not a defence of Taiwan but an observation that the split could have been done “more diplomatically”.

Mr Ingraham insisted Taiwan chose the time of the severance, and also when it was made public in an attempt to cast a better light on themselves over the Bahamas.

Mr Ingraham stated the country fully appreciated the friendship extended by Taiwan over the previous eight years and that there was also an appreciation of the Bahamas’ assistance, but furthered only a small minority of people - consumed by that friendship - were disappointed over the split.

He also expressed a willingness for continued economic and cultural relationship; however, he underscored it should not be understated that mainland China and Taiwan “considered themselves no more than estranged family members working to reconcile their differences”.

When contacted by The Tribune, Mr Ingraham was out of country on a Commonwealth electoral observer mission in Belize but said his position was on record.

Foreign Affairs minister Darren Henfield did not respond to calls or messages placed up to press time.

“When it comes to identity, almost 90 percent of the Taiwanese consider being Taiwanese as part of their identity,” said Ketty Chen, Vice President of the government-funded Taiwan Foundation for Democracy.

“Whether they consider themselves as solely Taiwanese or culturally Chinese but Taiwanese.

“In our survey we consider youth population as 39 and under, and the majority of Taiwanese youth also consider themselves as Taiwanese and support for democracy among Taiwanese in general is very high.”

Ms Chen said survey participants were asked for the first time this year whether they were willing to defend Taiwan’s democratic way of life, to which nearly 70 percent responded positively. More than 50 percent stated they would do so in the face of mainland China’s military threat; however Ms Chen noted the survey did not ask participants by what means they were willing to defend their democracy.

Despite challenges with forging and maintaining international partnerships, Ms Chen pointed to the establishment of the Asia Democracy Network as a major breakthrough for the TFD.

She said one the biggest challenges was finding solutions to counter fake news that did not encroach upon press freedoms and the country’s open democratic culture.

Characterising disinformation like a zombie, Ms Chen said local studies have estimated the life span of fake news is around 435 days.

“What we discover is when you see a piece of information that’s disinformation,” Ms Chen said, “that targets your emotion you click forward but later when you find out you share something that is untrue, well most people that share disinformation are less likely to share the clarification.”

The government has forged partnerships with hacker groups like Open Culture to write programmes that can identify fake news and provide fact-checked resources, as well as to hold workshops for human rights and democracy defenders on how to be secure online.

PLP Senator and former Foreign Affairs minister Fred Mitchell told The Tribune re-establishing formal talks with Taiwan would be “too difficult a needle to thread” considering its current relationship with mainland China.

He said cross-strait relations was something that should be left up to the two government’s to sort out domestically.

“No, there’s no room,” Mr Mitchell said. “We’ve agreed on a One China policy and Taiwan, as far as we are concerned, is a domestic issue. Unfortunately I can’t have a personal position, the policy is what it is. We signed diplomatic relations with the People’s Republic of China (PRC), and that’s what we committed ourselves too. It’s the policy of the PLP to support that position and there cannot be any change.”

Mr Mitchell noted there were attempts made by Taiwan to establish a visa abolition agreement for Taiwanese citizens; however, he said the government ultimately took the position that such an agreement was unnecessary because their travel would be covered under the existing agreement with mainland China.

“The Pindling government supported Taiwan at the start,” Mr Mitchell said, “but that changed under the Ingraham administration. I always thought (diplomatic ties with Taiwan) was awkward and we should be aligned with the government that had the majority of the population - if you’re going to talk about who is going to represent Chinese in the ethnic sense.”

“Some countries have gone the route of trade missions, and at one point we were exploring the possibility but that did not go very far.

“Our view was that it’s too difficult a needle to thread and we wanted to maintain the relationships we have. They were working well for us and there’s no need to deviate.”