Insight: Are We Being Lulled To Sleep On Carnival’S Ocean Dumping? 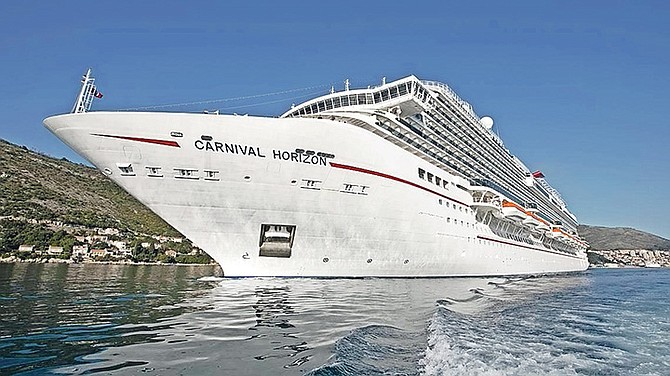 JUST four months ago, the nation was flabbergasted with the revelations of Carnival cruise line’s illegal dumping at sea. Many of us were shocked to find out the cruise giant was illegally using our pristine waters like a sewage system, dumping 500,000 gallons of waste into one of our most precious natural resources. Millions of tourists descend on our shores every year chiefly for sun, sand and sea. Carnival’s callous compromise of that resource angered many Bahamians – particularly the more environmentally conscious.

Unfortunately, there is a strange dichotomy in The Bahamas. While we may be a proud people, we are prepared to accept transgressions for the sake of jobs. To that end, Carnival’s proposed $100m mega cruise port development in Grand Bahama was touted to create 1,000 direct and indirect permanent jobs for an economy that desperately needs a stimulus.

While recent Department of Statistics unemployment numbers showed a decrease in unemployment in Grand Bahama, it is understandably hard to pass up on 1,000 additional opportunities for employment within the next one or two years.

Certainly, this makes the government’s decision-making process more complex. Earlier this year, the Carnival project turned a lot of heads, as the government’s prioritising of the revitalisation of Grand Bahama’s economy became more visible. However, we now have to consider all the implications.

Surely, questions had to loom as the government entered this deal with a company already serving a five-year probation, already fined $40m and an additional $20m for non-compliance to environmentally sound practices outlined in MARPOL Annex V – among them burning heavy fuel and illegally dumping oil and plastic-filled wastewater in protected areas.

Carnival’s poor track record can be traced back decades to the late 90s when one of its subsidiaries, Holland America Line, pleaded guilty to illegally dumping oil and was fined $2m and placed on a five-year probationary period for its actions. Further, in 2002, before being released from probation, Carnival was fined an additional $18m after being caught falsifying records to hide its illegal dumping of oil on six of its ships. Resultantly, Carnival ended up tacking on another five-year probation period, which through a series of bad acting on its part, subsequently led to the company being on probation for the entire millennium.

There is no doubt that we’re dealing with a serial bad actor in Carnival.

Now what we should all be wondering is why did the government get into bed with them in the first place. Of course, jobs for Grand Bahamians likely would be the answer. However, when will jobs simply not be enough.

Carnival is a hairline away from being banned from all American ports, as they are obviously fed up. However, luckily for the US government, there is some recourse. Carnival obviously sees fines as merely a cost of doing business. Thus, moving into jurisdictions with a much softer legislative structure can allow it to run roughshod, doing as it pleases once they deliver on jobs and promise to be good boys and girls.

Through this fiasco, what should be most concerning to the Bahamian public is what we’re not hearing from our leaders on Carnival.

Three months ago, ministers of transport, tourism and the environment all talked tough to the media about Carnival’s bad behaviour.

Tourism Minister Dionisio D’Aguilar, when asked for comment, said: “It seems as if all this information has come out as a result of a court case in the United States, and it seems as if, not only were they caught initially, but when they agreed to improve the situation, it is alleged that they did not improve that situation, and, so, naturally we are very concerned.”

D’Aguilar added, “While cruise ships are important to our economy, we don’t want to cause long-term, lasting, negative effects to our environment in our pursuit to get economic enhancement.

Environmental Minister Romauld Ferreira expressed his “revulsion” in much stronger terms. He said: “And this isn’t the type of behaviour that we would want to encourage or [in] any way condone and so as minister of environment, in the very strongest terms, we condemn such behaviour. It is totally unacceptable.”

Rounding off the government’s comments on the matter was the Minister of Transport. Renward Wells voiced the government’s commitment to addressing the issue and outlined the next steps: “We have asked the Bahamas Maritime Authority along with the Port Department and all relevant agencies to immediately investigate any and all discharges from vessels in Bahamian waters; to promptly report regarding such discharges; to assess any environmental damage that might have been caused and to make recommendations as to best practices across the board.”

Wells added the government was committed to instituting whatever mechanisms would be required to mitigate against such acts taking place in the future, in addition to seeking compensation for any damage that would have occurred.

Unfortunately, the kicker here is the lack of environmental protection laws may have left us wide open to environmental abuses that only the US government has been able to benefit from via its fines levied on Carnival.

Needless to say, we have not heard anything from the government on this matter since.

A recent article published on Cruise Law News last week, titled, “How Long Will the Bahamas Tolerate Carnival Trashing its Waters and Polluting its Air?”, highlighted what is most depressing about the government’s inaction on Carnival.

The writer of the article opined: “There is no indication that such an investigation has taken place to date. It remains to be seen whether the Bahamian government will conduct any genuine investigation into Carnival’s bad behaviour, but there is considerable evidence already that Carnival’s malfeasance has already inflicted substantial damage on The Bahamas.”

Our leaders continually feel as though they can pacify us with bluster and promises of probes and investigations, but such reports hardly ever make it in front of the Bahamian people. Later, we’re just sold on the jobs.

It is that type of modus operandi that has us looking like a Third World laughing stock.

While we were promised environmental protection laws, that however, will not retroactively punish Carnival for what has already occurred. And certainly, it won’t stop them from doing it again.

The Bahamian people have to be clear on what means more – having jobs or protecting our resources.

Certainly, if we could gain clarity on this, the government would have to reciprocate. Else, they would be fired.

At this time, we do not know what is currently taking place behind the scenes between the government and Carnival, but history has proven that we must tread carefully.

A thousand jobs will not pay the price for unquantifiable damage to the country’s natural environment.

It is fine time we wise up.

Carnival may just be the tip of the iceberg in regards to dumping of sewage in the ocean. And, in fact one must be painfully aware that the dumping of raw sewage in the ocean is not illegal as long is it is 80 miles offshore. And as the numbers of cruise ships increase exponentially the effects of ocean dumping will become more damaging and even more threatening to the ocean environment. The dying coral and reefs and seabed is already crying out with their dying breath as they lay dying from pollution and contamination. And the hypocrisy of this government is they have passed laws to fine a Bahamian $3,000 or six months in jail for releasing a single balloon in the air but nothing beyond international law is done to protect the islands and seas and curb cruise and other ships from dumping millions and millions of gallons of raw sewage and waste water in the ocean. Throw Rocks at Doc! And at the Minister of the Environment.

The FNM Government is more concerned about single plastic shopping bags. than they are about 500,000 gallons of sewage in the waters of the Bahamas.

Perhaps that is why the Cruise Pot is coming here they know they will get away with their dumping.

The only one dumping more shiit on us than Carnival Cruise Lines is our corrupt Minnis-led FNM government.

Quite right you are. The problem is, by the time The Bahamas finds its way, a significant part of the country will be underwater. This is a fact which few are speaking of. The data and projections are there for anyone to read and analyze. We are not talking centuries, we are talking decades. Anyone, and I am totally with you 100% on your argument here, who fails to make this part of their weekly rant has not spent the time researching this issue. Carnival should not be in The Bahamas at all, however, there are bigger fish to fry at the present moment. This lack of leadership is most glaring, however the people, remaining ignorant, do nothing to further the cause for planning for the future of this nation.