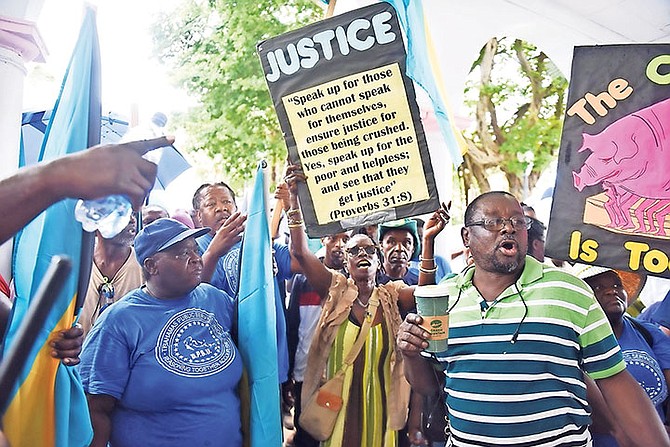 The protest at Rawson Square.

The Government must explain why it is “in such dire financial straits” that it cannot meet public sector worker demands, trade union leaders warned yesterday.

Bernard Evans, the National Congress of Trade Unions (NCTU) president, told Tribune Business it was “hard to fathom” how the Minnis administration is unable to reach agreement with the public sector unions given its increase in revenues post-VAT hike and recently-improved economic growth.

Speaking ahead of Saturday morning’s showdown meeting with the seven public sector unions, Mr Evans said the current industrial unrest had been exacerbated by the Government’s perceived failure to deliver on its promises for improved salaries, benefits and working conditions.

He urged the Minnis administration to unveil an “aggressive plan” for addressing all public sector union concerns, even if it could only make progress in a “piecemeal” fashion. The NCTU president added that it needed to provide a convincing explanation for why its “hands are tied”, and be alert to the “dynamics” driving pressures for increased incomes.

Suggesting that politicians needed to “walk the street” to learn how hard it is even for working Bahamians to make ends meet, Mr Evans argued that civil servants “suffered the most” - especially those earning less than $1,000 per month.

“It’s kind of weird to fathom,” he told Tribune Business. “With everything in the country supposed to be on an upward trend, the economy growing by 1.6 percent last year, all the money they borrowed since coming to office, and raising the VAT rate by 60 percent to 12 percent, it’s hard for us to understand how the Government is still finding it hard to meet its obligations.

“It’s weird. It’s strange to fathom. They [the Government] have to lay out to the public service workers why they’re in such dire financial straits and can’t meet that $1,200 lump sum payment.”

Bahamas Public Services Union (BPSU) members marched to downtown Nassau yesterday to demonstrate outside the Cabinet Office after the Government last week proposed paying the $1,200, which is supposed to help cover back-to-school costs, in two $600 tranches.

These would be paid in August and December, respectively, due to the Ministry of Finance’s fears that making the $20m payment in one go will severely impair the Government’s cash flow. However, with one week left before school resumes, civil servants yesterday sought to send a message to the Government that it is “all or nothing”.

Adding to the turbulent industrial relations climate in the public sector, 400 junior doctors at Princess Margaret Hospital went on strike on Wednesday over long-standing grievances relating to holiday pay and short-term contracts.

Mr Evans confirmed that the Government has now requested to meet with the seven public sector unions on Saturday at 10am. Besides the BPSU and Bahamas Doctors Union, others represented will include Customs and Immigration, the Bahamas Union of Teachers, the nurses, senior doctors and education managers.

“We hope that the Prime Minister will get the full brunt of what is going on with his ministers responsible for these entities,” Mr Evans told Tribune Business, voicing optimism that some matters may be resolved “on the spot” given that the entire Cabinet as well as worker representatives will be present.

“But they have to live up to standard. These promises keep going on and on and on. They keep on promising but never deliver. People keep reading the newspapers and watching the news. What has happened to the $65m spent on the hotel in Freeport? That has yet to materialise in any way for us.

“The Government seems to find ways to spend money on what it wants, but when it comes to the poor and downtrodden it seems to want to make them wait. Many of these persons earn less than $900 a month in the public service. What difference do you think $1,200 means to these people,” the NCTU president continued.

“They need to walk the streets and find out how single mothers with two to three children can make it on $800-$900 a month. It’s extremely difficult. Hopefully at the meeting the Government will be able to satisfy the worker representatives that they’re responding, engaging, and that they’re doing the best they can.”

Tribune Business understands that the average civil service salary is around $19,000 per annum, with around 10 percent falling into the category described by Mr Evans. Besides the $1,200 lump sum, the BPSU has also been seeking salary rises of $250 and $200 in the first and third years of a new industrial deal, together with a $2,500 lump sum payment in the second.

The $1,200 appears to be half of that figure, and the Ministry of Finance’s calculations indicate that the full lump sum amount would cost the Government (taxpayers) between $40m to $45m in a one-off deal. Combining the two salary increases would raise the annual service payroll by $9m, assuming there are 20,000 civil servants.

Mr Evans yesterday argued that economic growth could not come at the expense of worker salaries, benefits and living conditions, reiterating that income inequality and the “gap between rich and poor” was continuing to worsen.

“You can’t say the economy is getting better, getting better when everyone is employed on the minimum wage or contract, and with no pension or medical coverage,” Mr Evans added. “I know governance is hard. But they ask for the responsibility, get in there and find they’re not set for success. I know it’s hard but the reality is the reality. You have to balance the Budget but satisfy the masses.”

roc wit doc spends the tax payers money on what he wishes to spend it on $9.000 per month rent. post office rent, free university . He and Turnquest should have known the Civil servants money was due.

Doc it is like going to Florida and spending your rent and power and water bill money.

Doc seems to be travelling all over wine, dine and dance while the poor suffer.

doc closed off a road in the area he represents. because people were taking a short cut to the Airport just like that. but he tells the other people they can not address the flooding in their arears.

... while it doesn't make it right, every government does this Birdie, including the last one!

Helping to pay back to school costs??????

Dimwitted Minnis and his merry band of bandits have a wealth re-distribution mindset because of their incompetence and inability to introduce economic policies that would grow the economy and create decent paying private sector jobs. They view what wealth any of us may have as theirs to take by way of exorbitant taxes and fees, or additions to the national debt, and then spend as they see fit - usually for the purpose of trying to curry favour with the massive poor class of citizenry that they themselves created to begin with and now perpetuate. But the taxpayers have been raped, pillaged and plundered to the point where Robin Hood Minnis and his dishonest and incompetent side kick KP Turnquest have very few arrows left in their shared quiver.

What an unbelievable bunch of people! Considering how close to the brink of financial ruin we are, given the crisis at BPL and many other government agencies, given the lack of basic supplies at PMH and the Rand Hospitals and the list goes on; are people still crying for the government to find money for their back to school supplies......geez. I see why we can't get better!

Shouldn't our collective response as a people be: we really need to get our country back on track, once our country is profitable and things are going well, we all will get a chance to do better. Oh well, so much for that type of thinking!

... no our collective response should be to surround them and pelt them with coconuts!

That is not the Cabinet problem ........ that is called POOR LIFE CHOICES.

You could tell all that from looking at the picture :-