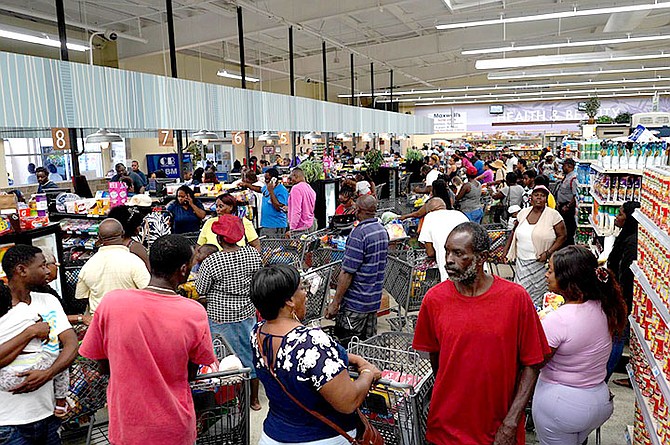 Courtesy of IBM & Bahamas “First Alert” Aviation, Climate & Severe Weather Network: Dangerous Cat 3 Hurricane Dorian is making a turn towards the north west Bahamas being potentially catastrophic with winds (130-160mph), life threatening storm surge and torrential rains. It should be noted, the track has reverted to the north placing Grand Bahama in the SW quadrant of the storm – out of the worst of winds/seas. 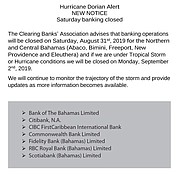 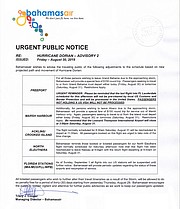 6.40pm UPDATE: Two more Dorian updates – one from Bahamasair about its schedule adjustments and one from the Clearing Banks' Association about banking operations.

6.10pm UPDATE: Nassau Airport Development Company Ltd has released the following statement about operations at the Lynden Pindling International Airport: “The Nassau Airport Development Company Ltd. wishes to advise the public that the Lynden Pindling International Airport (LPIA) is operating as normal today and it is anticipated that the airport will be open for operations tomorrow, Saturday, August 31, 2019 although airline schedules may vary.

“Nassau airport stakeholders met with the Bahamas Meteorological Office on Wednesday, August 28, 2019 and again this afternoon at 2:30 P.M. to assess the movement and status of Hurricane Dorian and its potential impact on LPIA.

“On its current track, it is not anticipated that Nassau will experience any storm conditions that would disrupt airport operations.  Notwithstanding, storm conditions could change, and all airport stakeholders are preparing in the event the storm shifts closer to Nassau.  We will continue to monitor weather conditions closely and will provide a further airport update at  3:00 P.M. on Saturday, August 31, 2019.

“In the meantime, persons are asked to visit LPIA’s website www.nassaulpia.com and social media channels for the latest information on airport operations.  The traveling public is encouraged to contact their respective airlines for flight updates.  A listing of all airlines and their contacts can be found on LPIA’s website at http://nassaulpia.com/flight-info/airlines-serving-lpia/ .” 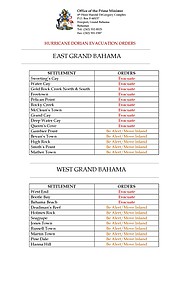 FRIDAY 5.50pm UPDATE: The Office of the Prime Minister has released a list of Hurricane Dorian evacuation orders for settlements in East and West Grand Bahama.

FRIDAY 5.25pm: PRIME Minister Dr Hubert Minnis made a final plea on Friday to residents living in high-risk areas of Grand Bahama and Abaco to evacuate, warning that to ride out the dangerous storm could be a gamble with life – full story HERE

Shutters go up in Harbour Bay on Friday.

FRIDAY AFTERNOON UPDATE: The Cabinet Office advises that due to the proximity of the projected course of Hurricane Dorian to Islands of The Bahamas and the forecasted weather associated with the storm, which is expected to impact The Bahamas, all Government offices, except for essential services, will close at 12:00 noon today, Friday, 30th August, 2019. Based on the projected intensity of the storm residents are advised to heed the warnings issued by the National Emergency Management Agency (NEMA) and the Department of Meteorology, and stay tuned to further updates.

HURRICANE Dorian could intensify into a “very damaging” 156mph Category Four storm that lingers for hours in the Bahamas, according to AccuWeather senior meteorologist Dan Kottlowski yesterday.

In an interview with The Tribune, Mr Kottlowski said new computer models show that when Dorian passes over Grand Bahama and Abaco this weekend, there is the potential for it to develop into a more powerful storm.

These models predict Hurricane Dorian making landfall on those islands Sunday and into Monday, he said.

“It’s now looking as if Dorian will pass over very close to northern Abaco and northern Grand Bahama as we go through Sunday – Sunday night perhaps early Monday,” Mr Kottlowski said. “It could very well be a category four hurricane with winds of up to 130mph and 156mph.

“The biggest issues right now are the fact that the implications are that if it does take this track close to northern Abaco and Grand Bahama, it could bring damaging winds very close to those islands as well as very heavy rainfall and some storm surge as well. There is a possibility that this hurricane might stall close to Grand Bahama or northern Abaco during Sunday or Sunday night into Monday.

“Some new computer information is certainly showing the possibility of that happening.

“If that happens, there could be a prolonged period of very heavy rainfall and, of course, hurricane force winds for several hours and again that would be very, very damaging for both islands.”

At the time of this interview, Hurricane Dorian was about 640 miles to the southeast of Nassau and packing winds of about 85mph.

Mr Kottlowski said today, Dorian is expected to increase to about 100mph and then intensify into a Category Three storm with winds of about 130mph.

A hurricane alert remained in effect for the islands of the northwest Bahamas.

Chief Meteorologist Basil Dean, from the Bahamas Department of Meteorology, explained yesterday that officials are very concerned about Abaco.

He said: “Again we still expect it to pass well to the east of the southeast Bahamas and the Turks (and Caicos) tomorrow and also the Central Bahamas on Saturday and by Saturday night late going into to Sunday morning approaching the Abacos.

“Grand Bahama too could possibly experience some elevated winds as it passes but mainly Abaco is the only island we are really over concerned about.

“The others they remain in the cone of uncertainty and we will keep them there perhaps until early morning and that is when we will make our big decision as to what we are going to go with heading into sunrise.”

As for New Providence, Mr Dean said the island is forecast to experience some rain.

The National Emergency Management Agency (NEMA) has continued to urge Bahamians across the archipelago to adequately prepare for the approaching storm.

The blind leading the blind. The Grand Lucayan Hotel will likely take a direct hit when Dorian's winds are at their maximum hurricane strength.

The EYE is on target to go into Marsh Harbor, then on to West End and down to Freeport where it will go back out to sea and head over to Florida. Grand Bahama and Abaco may be the hardest hit of all the landfalls as they will both get the eye, it the hurricane continues on its present course.

Stay safe! Prayers for all of you!

So the damn red chinese had better look after themselves. OUR GOVERNMENT SHOULD GIVE THEM NOTHING if they suffer loss. Confiscate their holdings if necessary and send them packing. So says me, Robert Sands