Davis Was The Brains - Gibson 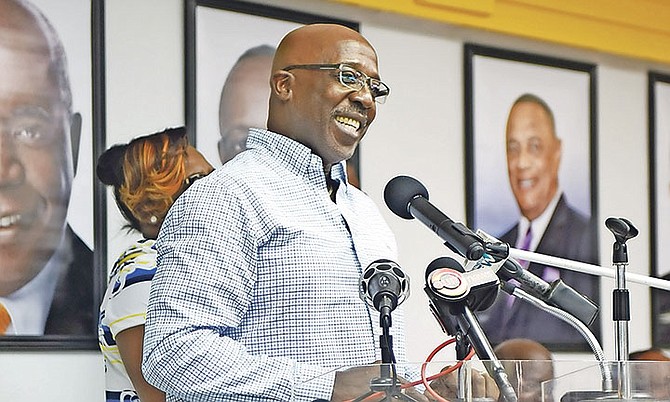 He made the statement during a PLP event at the party’s headquarters celebrating his acquittal.

He did not address the affair in depth, saying that though he prepared a lengthy speech, he will speak to it all at a later date.

Mr Davis recounted some of the facts related to Mr Gibson’s case and that of former PLP Senator Frank Smith who was also acquitted of bribery charges earlier this year.

“Throughout the two cases that have been completed, we have witnessed with great horror and disbelief, incontrovertible evidence of grave and rank prosecutorial misconduct and corruption,” he said.

In the case, the lead police investigator admitted it was wrong to meet key witnesses to synchronise their statements, something Supreme Court Justice Carolita Bethel also said was “very wrong.” Assistant Superintendent of Police Debra Thompson testified that this is a common practice and that Commissioner Anthony Ferguson and Director of Public Prosecutions Garvin Gaskin was aware that it happened in the case.

“In the face of all this, the attorney general who is the head of the bar, an officer of the court and the chief legal guardian of the integrity of the judiciary, did absolutely nothing save for a wink here and a nod there, bringing the administration of the criminal justice systems into ill repute and the laughing stock of the region,” Mr Davis said.

Mr Davis said Attorney General Carl Bethel “has a lot to answer for as he has consistently breached the public trust and has defended the indefensible.”

“In fact, he should be fired or made to resign,” he said.

Mr Bethel has so far refused to reveal the legal fees associated with the cases.

“We are hearing all kinds of numbers from $20,000 per day to $1.4 million in total,” Mr Davis said. “This government could find huge sums of money to pay lawyers for these politically driven cases with trumped up charges but refuses to pay the workers monies duly owed to them.”

“I hear people talk about the AG and the DPP and the ASP and the CM,” he said. “But they seem to forget about the PM. Remember all dem rallies Minnis had talking about people ‘gern to jail?’”

Yeah, no. The comrades of the PLP should stick to serving the Queen as Her Majesty's official opposition, and not participating at for the nearly two hour event for speakers attack the government. Truth is that despite the governing party being a governing serial train wreck - comrade "Brave" and his four elected MP's - haven't much benefited from popoulaces growing dissatisfaction, if at all, Why they would for even a split second think that a much known controversial former minister can be a positive source to attach their 2020 wagon to - does baffle the mind.

Shane, a verdict of not guilty does not mean that a person is not guilty! It simply shows some people have perfected the art of doing the crime and getting away with it!

Actually a not guilty verdict means exactly that... the defendant is not guilty. How you feel about it is totally irrelevant.

... unfortunately there are any number of technicalities that can allow a person who committed a crime to go scott free, but this is common knowledge!

Nothing but an effort to try transplant the success of QC Knight to the very unsuccessful repugnant and pudgy fella with short, stubby, grubby, dirty, yellow, sticky fingers.

Shameless Shane and his corrupt PLP buddies have been greatly emboldened by the abysmal stupidity of PM Minnis, AG Bethel, Commissioner Ferguson and others.

Again this is all a matter of your opinion which in the grand scheme of things is totally irrelevant. The court has decided on the facts and that's the only thing that stands.

Are you counting yourself among the many in our country who are delighted with outcomes produced by our failed justice system? The many criminals in our society today have great disdain and hatred for law-and-order and just can't seem to get enough anarchy.

I don't think you get it.. Whether you feel the justice system works or not is irrelevant. Your feelings have no place in the law. You're entitled to feel that way but it really doesn't matter.

The courts have vindicated him and that's all the matters..

There are probably still some people that believe that OJ Simpson was not guilty.

What people believe is a non - factor once the courts have ruled.

but our court system has always been a joke and everyone once dey got money and friends in the right place be they PLP or FNM always seem to get off - what an interesting coincidence?? how could this possibly keep happening again and again?

Everyone knew Shame was getting off before he even got on!!!!.(an old anna nicole smith joke....)

Even if you're caught on tape and on camera and there are 5 witnesses, all it takes is for one lousy inspector to write something additional on a piece of paper and BOOM, you're suddenly innocent. I wonder if a lousy inspector would know in advance that a case can be corrupted and a known criminal walk free, if they accidentally messed up?

These things usually work, until you get Attorneys, who dot all I's and cross all T's

Our failed justice system ensures the corrupt political elite and their family members, cronies and friends, whether of the FNM or PLP persuasion, are well inoculated against the all too prevalent Shingles disease. This is the way it is in most banana republics the world over.

Brave was the brains? Well kiss my yellow grits...Donald Trump must really be a stable genious!