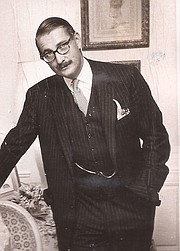 Richard in New York when he worked as a young lawyer for Cravath, Swain & Moore in the early 1960s.

The Bahamas has lost one of its most influential citizens and The Tribune its most trusted business columnist. Richard ‘Dick’ Coulson passed away early on Friday morning at Doctors Hospital after a brief illness. He was 88.

Born January 8, 1931 to Sidney Cuthbert Farrington and Abby Stewart Farrington, Mr Coulson was by profession a Wall Street lawyer, international investment banker, Korean War hero, financial consultant, author, columnist, husband, father, grandfather. Most of all, he was a friend to The Bahamas who added in immeasurable ways to the development of its commercial culture and its place in centre stage of offshore finance.

Richard during his time in Korea in 1953.

With a fascinating upbringing that included three homes every year – New York, Nassau and Massachusetts, shuttled back and forth until boarding school by a glamorous mother who introduced him to two separate fathers, he enjoyed each experience, never realising that this was not the ordinary life. When many others – raised with money and the finer things it could buy – fled The Bahamas after Independence, the Andover and Yale-educated Mr Coulson ran back to what he considered his true roots and though he traveled the world thereafter, Nassau was always his roots and it was to The Bahamas that he lent his great insight and sage wisdom. In later years, after his formal retirement from offshore banking, there was hardly an IPO, private placement offering, or a board of directors that did not benefit from his influence and counsel.

Lesser known is the softer side of a man whose intelligence spilled over easily into an ability to write without ostentation, breaking down complex business matters into simple scenarios that everyone could grasp. Mr Coulson’s opinions mattered. While Minister of Education Jeffrey Lloyd today called him “one of the greatest financial minds this country has ever known,” Alexandra Maillis-Lynch remembered what his support of her plan to create a company based on her cooking meant. Her words -- “He was a very pivotal figure in the early direction of my career and was willing to trust a young Bahamian when everyone was saying that I couldn’t possibly be a Bahamian cook!” Today, that company, Events by Alexandra, is a success story, one of many that may never have happened without the encouragement of a Bahamian who dined with royalty yet never underestimated the worth of the individual with an idea. 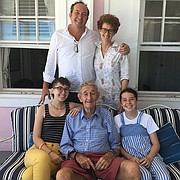 Mr Coulson’s patriotism was remembered by radio personality Greg Lampkin who said “The country has lost a truly concerned patriot,” a thought echoed by Organization for Responsible Governance Executive Director “Through his writing and a few in personal discussions, your father helped me to better understand the role of citizens in governance. He will be missed but not forgotten.”

Accolades poured in from the business community and its regulators, including from Christina Rolle, Securities and Exchange Commission who called Mr Coulson “a strong and consistent advocate for the development of the Bahamian capital markets,” adding “The entire financial services community will miss him.”

No one will miss Mr Coulson more than his devoted daughters, Diana Coulson, who lives in Paris, and Amanda Coulson, Director of the National Art Gallery of The Bahamas, and the grandchildren he adored, Emily Voges, 16 and Daisy, 13, born to Amanda and her husband Uli Voges, Curator of Art, Central Bank of The Bahamas.

“He taught me we are all human, all individuals, and that it is always worth taking the time to truly know one another before deciding who somebody might truly be under their skin or behind their mask,”

Amanda recalled, noting that her father did not care what colour someone’s skin was, or their ethnicity. sexual preference, even, jokingly their Junkanoo or political colours. He did not understand intolerance.

“He taught us a healthy respect for our differences and diverse values. He was a proud Bahamian who passed his love of country, hard work and service to his daughters and granddaughters and through his actions he showed himself to be a patriot who believed strongly in equality of all kinds. He taught me how to be socially engaged and how not to be scared—as a young woman—to use my intellect and carve my own path. He was consistently supportive of my choices, even when I suspect he was not entirely sure they would lead to my happiness, he would counsel me but allow me to succeed or fail on my own, while always having my back. He was brutally honest, honourable, thoughtful and the best damned backgammon teacher anyone could ask for. His mind was razor sharp and he would not spare you his clear analysis; he was a keen observer of life, a storyteller and, surprising to many, a wonderful poet.”

To his older daughter, Diana, he wrote in his last e-mail, “I accept that life-spans at this age can end abruptly and unpredictably, as a normal fact of life, not to cause great wailing or anguish.”

Though best known for his business acumen and the razor-sharp mind, as daughter Amanda describes it, Mr Coulson was also an avid competitive sailor, art collector and the author of A Corkscrew Life, Adventures of a Travelling Financier, which was published in 2014.

A private memorial service will be scheduled later and his ashes will be scattered in his beloved Eleuthera on his birthday in January.

In honour of his life’s passion and commitment to nation-building by supporting young Bahamians in their vision, the family has established the Richard Coulson Scholarship Award in Finance, to be granted annually towards the education of a young Bahamian. Donations can be made to Richard Coulson Memorial, First Caribbean FCIBC, #2552862

I did not know him, but I learnt much from his relatable writings. Thank you sir, travel well.

Condolences to his family

I did not always agree with his business analysis but I respected and appreciated it. It saddens me greatly that there are no more of his columns to look forward to. My condolences to his family.

I shall always regret not having time to really know him and enjoy his wit and wisdom. Condolences to his family and friends.

Condolences to his family. A great loss to our Nation. Richard was an avid supporter of renewable energy systems and wanted to to be up to date on the latest technology. He was a great listener which made him very wise and a person worth listening to.

Very sorry to hear this. Condolences to his family.