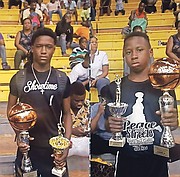 IT'S not every day that you see two brothers excelling in the same sport at the same time.

Deyton and Michael Albury Jr are the exceptions.

While Deyton Albury is now at Sunrise Christian Academy making his presence felt for the Buffaloes basketball team in his final year as a high school student, Michael Jr is holding court for the Teleos Academy Cherubims.

The brothers have left their father Michael Albury Sr bursting with excitement about what the future holds for his family.

"I am very proud of both of my boys, Deyton and Michael Jr," said Albury Sr.

"Every game they play, they end up being one of the top players and it doesn't come as any surprise.

"Deyton is at Sunrise Academy now and is excelling on their Select team. I'm sure one day Mike will be transitioning very soon, if not at SCA, definitely in the US."

Albury Sr and his wife, Denise, made the decision to move Deyton from Temple Christian Academy at the end of the 11th grade and shipped him off to Bel Aire, Kansas State, Kansas.

While he waited for the start of the basketball team, Deyton suited up for the Buffaloes to play an important role on their football team as they captured the state title in November. Although he just caught on to the game in a short space of time, Deyton is looking forward to duplicating the feat as he tries to help the Buffaloes capture the basketball title next year.

Averaging 24 points per game, Deyton Albury produced 15 points with eight rebounds, seven assists and four steals in the Buffaloes' last game played over the weekend as they improved to 5-1 with a 78-71 victory over Bethel College.

"I had a good game because, in that game, I was getting more of my teammates involved early," said Albury, who scored 29, 27, 25, 26, and 19 in their previous games played. As he continues to make his contribution to the success of Sunrise Christian, Albury said he intends to do a year of prep school in the US before he looks at entering college.

In the meantime, he's just as thrilled to watch the performance of his younger sibling. "My little brother, as usual, had a good performance leading his team in scoring and doing his thing on the floor," Deyton pointed out.

All that he learned, Michael Jr said he got inspired by watching his bigger brother. "I am very proud of my big brother's performance," he said.

"I wasn't interested in basketball until Punks (Deyton) made me play with him on our court at home when we were four and seven years old.

"Since then, I looked up to him and respected him on the court. He has taught me all I know."

Michael Albury Jr is now honing his skills with Teleos where he said they have a mixture of new and old players, but they are jelling like a well-oiled machine.

"I am playing a sport that I have grown to love so every time I go on the court, I go with great enthusiasm and it shows in my stats at the end of each game," Albury Jr said.

Albury Jr, a 14-year-old 10th grader, is averaging about 15 points per game as he leads Teleos to a perfect 5-0 win-loss record so far this year.