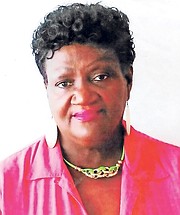 Dr Pratt has been doing cultural research in the Bahamas for more than 30 years and founded the African Bahamian Museum and Research Centre, located off Kemp Road.

She was not only awarded for founding the centre but for commemorating the role of the Bahamian Underground Railroad in the freedom journey of African American and Seminole Indians.

The honor is bestowed upon individuals who have distinguished themselves in the field of preservation of historical research and or genealogical studies. Dr Pratt’s exemplary research connecting The Bahamas and Unites States precursor of the Underground Railroad and preservers of the cultural history of the African Diaspora was praised.

Harry Bradshaw Matthews, Associate Dean, director of office intercultural affairs at the college wrote in a letter that the award to Dr Pratt was truly fitting.

“It was appropriate you were honoured by the USCTI as the gold medal recipient of the American Society of Freedom Descendants. Since 2010 this honour has been bestowed upon individuals who have distinguished themselves in the field of preservation historical research and or genealogical studies.

Dr Pratt was recognised after being invited by Bahamian student of Hartwick, Shanria Jolly. Shanria participated in Dr Pratt’s Cultural Heritage Program this summer in-conjunction with the Ministry of Youth Sports and Culture. After being enlightened by Dr Pratt’s presentation Shanria raved to the school which later extended an invitation.

“I would like to express gratitude to Deka Deleveaux Grant, the officer at Youth Sports and Culture ministry. She is also owed gratitude from me because it was her summer student worker that worked with me and we have an excellent relationship,” she said.

During her presentation Dr Pratt shared with students about the intriguing stories surrounding the Bahamian connection to the Underground Railroad, a network of secret routes and safe houses established during the early to mid-19th century, and used by African-American slaves to escape into free states and Canada with the aid of abolitionists and allies.

The highlight of the lecture was the US/Bahamas Underground Railroad Freedom studies and its link to the struggle of the US-Creole slaves who took a stand against enslavement in order to attain their freedom on the Bahamas seas and in the city of Nassau.

Some of the information detailed how black and white Bahamians played a pivotal role in freeing some 135 US-Creole slaves in 1841.

Though this is not the first time Dr Pratt has been honoured, having received the Living Legend Award (Florida International University, Miami, Florida) for the US/Bahamas Underground Railroad Studies and The Star Award is from the US Government for The US/Bahamas Underground Railroad Connection from America to The Bahamas she said it is satisfying to know the extensive work she has been doing has not gone unrecognised.

“I never thought the work I was doing in the little small Bahamas meant so much to the universities and colleges of America,” she told Tribune Woman.

“I feel great that outside of the Bahamas I am honoured for my Underground Rail Road studies. I know there is still more to come,” she said.

Dr Pratt said she will accept as many invitations as she can to share the history of those who have been enslaved.

“There was a 30-year difference between Bahamian emancipation and the African American emancipation. So these people wanted to be freed. Most Caribbean countries under the British colony was freed August 1, 1834. A lot of African Americans got their freedom in The Bahamas. Many of them settled and stayed. Some of our great great great parents were run away slaves,” she said.