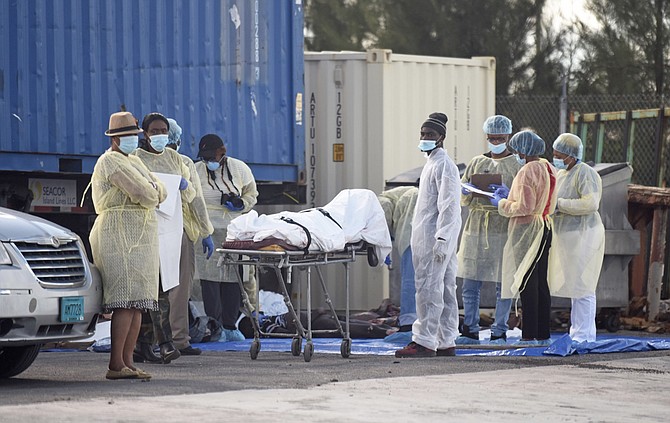 The final death toll in the Abaco boat disaster could rise to as high as 65.

For days unofficial figures have pointed to a much higher death toll but a statement released yesterday by the National Emergency Management Agency (NEMA) revealed there are approximately 35 people who were on board the stricken vessel who remain unaccounted for.

Another body was recovered yesterday, bring ig the number brought to shore to 30 with 18 confirmed survivors.

NEMA reported the ship was carrying approximately 83 people - 76 men and seven women, all of whom were Haitian. There were no children on board.

The Immigration Department on Sunday said 87 people may have been on board but this number has been challenged by volunteers involved in the rescue operation who said many of the survivors put the number at 45.

Adding to the uncertainly on Monday Dr Jean Paul Charles, president of the League of Haitian Pastors said he had unconfirmed reports the number onboard could have been as high as 96.

Yesterday’s figures from NEMA provide as close an answer as we are likely to get.

Rescue and recovery operations are continuing but as time drags on chances of survival will diminish for the passengers unaccounted for unless they somehow make it to shore.

In NEMA’s statement Director, Captain Stephen Russell thanked all those involved in the tragedy.

“First, let me on behalf of the Commonwealth of The Bahamas extend condolences to the people of Haiti and to our Haitian brothers and sisters thought The Bahamas,” said Capt. Russell.

“... It is believed that the tragedy occurred as a result of engine problems and the vessel ended up in the cays of Abaco.

“We are saddened by this terrible loss. We know that an incident of  this kind has happened before in Abaco. But it was never to this magnitude where so many lives were lost...”

Hours before NEMA’s statement Pope Francis sent “affectionate thoughts” to the Haitian people and relatives of those who died in the Abaco tragedy as he ended his General Audience in Vatican City.

As Roman Catholicism is the official religion of Haiti, the Pope recognised the tragedy and asked parishioners to join him in prayer for the victims.

“Last Saturday, near the Bahamas archipelago, a boat sank, carrying dozens of migrants from Haiti in search of hope and a peaceful future. My affectionate thoughts go out to the families who are in pain, as well as to the Haitian people affected by this new tragedy. I invite you to join me in praying for those who have tragically lost their lives and for the wounded,” he told the thousands gathered in the Paul VI Hall.

He said boat captains and others who facilitate these “terrible” acts are greedy and should receive whatever the law has to offer for these kinds of offences.

“Smuggling and trafficking in human beings is grotesque, it’s terrible and these are just greedy individuals who care nothing more than to put a few dollars in their pockets, you see what happened,” Mr Dames said when he was asked to respond to calls from some in the general public for the boat captain to face charges over the deaths of the Haitians who drowned when the boat they were on struck a reef last Friday.

“They don’t care, they put people’s lives at risk and they ought to get whatever the law has to give to them,” Mr Dames said. “This is sad very sad.”

While the incident highlights the dangers of the journey from Haiti to the Bahamas and other areas, it also raised questions about the Sandy Bottom Project’s functionality, according to Progressive Liberal Party Leader Philip “Brave” Davis on Tuesday.

Mr Dames was asked to respond to Mr Davis yesterday outside the House of Assembly.

The Royal Bahamas Defence Force project was commissioned under the Christie administration and cost taxpayers $232m.

“Where do you want me start from? It was a total mess. We had to work assiduously to bring it to some semblance of order. Do you want me to give you the run down on the mess that we met?

“We still have vessels that have to leave Nassau, travel south and when they run low on fuel guess where they have to go? They have to come back to Nassau. That’s the Sandy Bottom Project that we met. That’s one of the mess that we met when we came into power.

“We still have vessels down at the (Royal Bahamas) Defence Force base where the Bahamian people’s monies have been invested and there is no shore power.

“This is when you invest in something and there is no foresight as it relates to planning so we spend on average $10,000 a month to provide fuel to keep those boats powered while they are at the base. So you can imagine the wear and tear that it is putting on those vessels. Now we have to find close to $400,000 to correct that problem. Do you want me to go on?

“Investing and taking on projects is one thing but having some concept as to how you plan and prepare to accommodate is another thing.

“You could imagine, these big vessels they are out there and these officers are engaged in operations they run low on fuel they have to come back to Nassau. That’s the kind of mismanagement and convoluted planning that went around.

“I can go on and on and on but we are beyond that point now. We have to fix what we met in place and we are doing a good job at it. We have to ensure that when we spend people’s monies that we’re spending it wisely and that every dollar counts. This is what this government is seeking to do.”

President of the League of Haitian Pastors Jean Paul Charles told The Tribune on Tuesday the bodies of the dead are in the process of being turned over to the Haitian Embassy in Nassau and the league.

There are plans in the works to bury them on Sunday, he said.

This is why they MUST be brought here from Haiti - the entire journey - on our Defense Force boats. They could be brought to Abaco and then released at the freight dock, just as if they would have snuck in at night. This would be the safest most humane way to handle this. One trip per week, for each of 3 defense force vessels.

Nothing will stop them from coming here for free social services, free schooling under U,N. law, free land, and free phone cards - so it is best to avoid international condemnation for inhumane treatment by transporting them safely ourselves. Same result - just safer. Avoid the eye of the Pope.

We should all be voting for candidates nominated by the newly formed BFH party, i.e. Bahamas For Haitians party. Only then can we quickly achieve true majority rule by electing many more Haitian MPs who can appoint a Haitian PM from among themselves. Minnis and his crew will soon represent the minority and therefore must be made to step aside. Remember to cast your vote for the BFH (Haitian) candidate running in your constituency come the next general election. The BFH election slogan will be: "We deserve true majority rule!" LMAO

I'm going to try and think like an PLP for a moment... Ah, I have an idea. How about we allocate Inagua to Haiti? That way the Haitians can travel to 'The Bahamas' unimpeded. Plus it's not such a far journey. They should then be happy and stay there and they won't try to move into the rest of The Bahamas.

I know there as some pretty big words in there but the ignorants should get the gist (sorry, another big word).

"We have to ensure that when we spend people’s monies that we’re spending it wisely and that every dollar counts. This is what this government is seeking to do.” This statement seems a tiny bit inaccurate as we have a Prime Minister who is very fond of travelling and sending 'his people' travelling unnecessarily around the Bahamas and around the World at The Public's expense. He has obviously forgotten whose time it was supposed to be as this is just one sick example of urgent items that cannot be tended to because of the unabated extravagances..

The description in the rbdf news release is 40-foot conventional sailing yacht. I am assuming not a regular sloop so likely not as much could have fit on that or they were trying to sneak in so everyone was below deck.

The most astonishing part of the whole ordeal is this is the first time anybody seems to know exactly how many Haitian parasites were on a vessel!

The tragedy is far reaching. Families in Haiti not knowing if their loved ones are dead or alive. Persons and families in the US in a similar situation. And persons here whose immigration status may be in the limbo or they don’t want to jeopardize it so they too scared to come forward and help with the identification process. Only thing to do is take pictures and make an album that family can access and know the fate of their loved ones. Or if that’s to macabre, then make an album of the survivors

If 10 Bahamian males were killed trying to break into a bank or committing some other crime I doubt there would be the same level of grief over the outcome. These people died as a result of using money from relatives in the Bahamas to take an illegal trip into this country where they would then have safe housing and a job. They were criminals who died in the act of committing a crime while being supported by a network of criminals! Simple!