No Threats To Safety At Our Schools, Says Education Chief 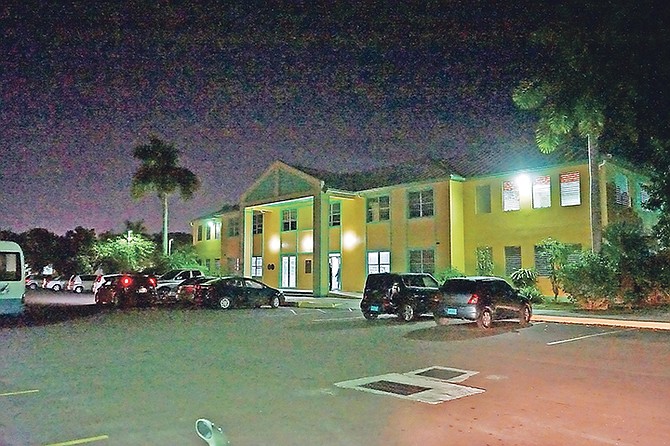 Jeffrey Lloyd, the Education Minister, yesterday stressed there were no threats to the safety and welfare of teachers at public schools across the country as he committed his ministry to swift action after a teacher at CV Bethel Senior High School was reportedly beaten by students

Mr Lloyd told reporters outside Cabinet yesterday he was waiting on the findings of a police investigation into claims a marine biology teacher was injured during an altercation with two male students last week.

“Nobody deserves to be put in any way in a compromised position with regard to their safety and welfare,” Mr Lloyd said, “and that of course is something that I am most passionate about in terms of making sure they are protected, teachers and students and anybody else who happens to be on a campus, administrators and so on.

“As I am to understand there is nobody’s life at CV Bethel or anyone else on our campuses around this country, 172 schools, whose lives are in jeopardy or whose safety or whose welfare are threatened. I know of nobody else.”

The incident took place on Monday, January 21, according to Bahamas Union of Teachers President Belinda Wilson, who confirmed teachers at the school sat out of the classroom for the remainder of the week, returning on Monday.

In response to the sit-out, Mr Lloyd said if reports are true, then it was an illegal action that contravened their industrial agreement.

“When I have that report in my hand then we will take whatever steps may be necessary. I am advised that the teachers have not been going to class, of course I am following up very closely on that and if that is so and I certainly have no reason to doubt the sources of my information, then the teachers need to be in classes now,” Mr Lloyd said.

“This action by them is illegal. It is contrary to the industrial agreement and they need to be in the classes teaching our students who have the right to an education, and have a right to the professional guidance that teachers provide.

“That is my fundamental obligation and concern and I am taking that very seriously,” Mr Lloyd added.

Yes, or no - a fundamental obligation and concern of the Colony of Out Islands comrade prime minister is to be taking very seriously if it's not reached time when students and teachers needs be assigned a fresh face member from Imperial red cabinet's forces....... PM, why not shakes things up go outside ranks the elected reds to recruit to appoint as red senator then to cabinet and as education minister.............. one comrade DNA sister Arinthia Santina....also open conversation for Bran, return to senate then cabinet, yes, no?

To call teachers sitting out in response to violence one of their members "violators of the industrial agreement" is a callous response to this precarious situation. How can you speak so firmly on a matter you have said you have not been informed on the details thereof?

The real "problem" in this case for everybody is that the teacher "punched" one of the students in his mouth first. . .as it is on these here Nassau streets. . .he got punched back "in he mouth". . .the teacher in turn attempted to "body slam" the student and hurt his wrist because he body slammed the student wrong. . .the other student "parted" the fight. . .both students were quizzed by police. . .the information put all of them in problems because the teacher hit the student first!! The union want the students "punished" because they "put their hands on a teacher". . .no matter what the teacher did!! That is why the minister "playing hard ball" with the union. . .the teacher is now in danger of getting fired. . .the union making themselves look like fools. . .dumb fools!! The police them are also "dancing around" this issue also in order to not get the teacher fired!! This teacher is like the one who punched a student in his mouth at S.C. McPherson Jr. high school. . .the student who was a "karate man" punched him back. . .body slammed him. . .then told him to cool off!! The union wanted that 14 year old student to be expelled from school for life!! The authority at Department of education told them that the teacher attacked first. . .something all of them were warned never to do. . .they moved the teacher to C. R. Walker school. Another story at C.R. Walker. . .a male teacher grabbed a female student and pulled her by here clothes and her skirt came off in the class. . .she "slapped his head off". . .as student now say. . .the union also wanted the student expelled from school. . .they sat out also for the same reason. . .students should never hit teachers. . .even in self defense!! In all cases they oped to "sit out" until the student is punished!! That female student was transferred to C.C. Sweeting high school where she went on to become an honor scholar!!

@licks2, I agree, "the union making themselves look like fools. . .dumb fools!!" In fact, those teachers should be cut for all those days that they sat out of the classroom wasting time. How many times are they going to be told, not to touch those "rugrats". Refer them to the principal's office if they are causing a problem because these children now a days lack discipline and are a nuisance. They are the product of irresponsible parents!

The Teachers Union and the former Deacon appear to be at odds. The problem is Mr.: Lloyd and Ms.; Wilson are both. Pompous and full of themselves. so it seems.