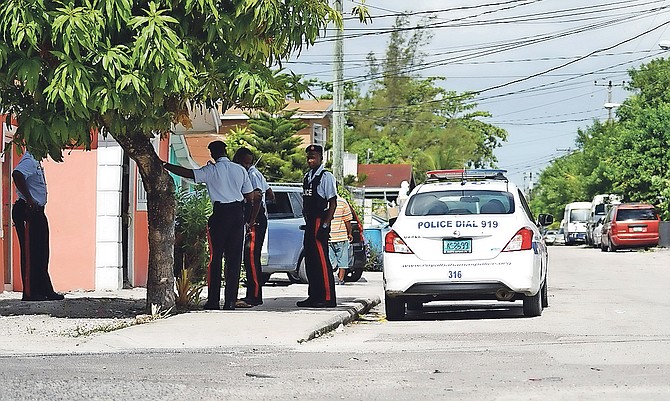 • Police Commissioner insists: Public has no need to be afraid

FIFTEEN people were shot early yesterday morning in Montel Heights during a birthday celebration that turned into a nightmare.

According to police, ten of the victims were female and four were minors — the youngest of which is just ten years old. Up to press time, there were no fatalities and according to the Public Hospitals Authority only one person remained in critical condition.

Minister of National Security Marvin Dames described this as a “tragic and unfortunate incident”. Both he and Commissioner of Police Anthony Ferguson stressed that the target was a specific individual - not the general crowd.

The Tribune canvassed the Ethel Street community hours after the mass shooting occurred. Neighbours insisted the gathering was a birthday party for a pregnant woman. The uncle of the celebrant said seven of the gunshot victims were their relatives. The pregnant woman was not injured. 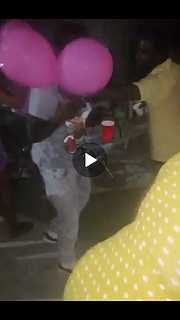 “They (were) having a family get together,” Devon Oliver, 37, said. “It was my niece’s birthday and her and her friends had a little gathering. And everyone was having a nice time and two males came from the back corner, come up…and opened fire on the crowd, hitting 15-16 persons, including a child.”

According to Mr Oliver, among the victims were parents, siblings, cousins, and friends. He added his family has lived on that street for “generations”.

“This road (Ethel Street) is a quiet area. Everybody on this road is actually family. We work as a team…it’s not no troublemaker on this road. Now the area itself, it do have its ups and downs. But on this road, we don’t have that type of violence on this road.

“It’s just sad to know, why would you want to open up shots or open shoot in a group with lone females? Because mostly it was females and kids. It wasn’t no big blast music. One lil’ box playing music. Women and children. I don’t know why they (would) do that.

“I pray God that everything work out well and they pull through,” Mr Oliver said. “And I praying for them. I would like for the public to pray for them, to pull them through.”

Police initially reported there were a total of 14 gunshot injuries, four males and ten females, with three victims in critical condition. The statement also said three other victims with non-gunshot injuries were admitted to Princess Margaret Hospital.

However, in a statement released Sunday evening, PHA said 15 gunshot victims were assessed at PMH. It noted six of the victims were discharged and one person remains in critical condition.

Mr Dames addressed the matter in an interview with The Tribune yesterday.

“It’s a very, very tragic and unfortunate incident. Certainly, given that it occurred while persons were at a function to celebrate and then you had this very unfortunate occurrence, it speaks to where we are in the country.

“Someone was shooting at a particular individual. And based on the information that we have, that individual ran into the crowd.

“So I want us to be extremely careful that based on what police know at present, wasn’t that the intent was go there and shoot up everybody.

“But it shows too the cowardice of these persons who are engaged in these kinds of activities,” Mr Dames said.

He said police received a report of the shooting shortly after midnight.

“Additional information is a male was walking towards the party, when he was confronted by two men who (began) shooting at him resulting in persons being shot,” Commissioner Ferguson said.

He confirmed the targeted person was indeed one of the people shot, adding he sustained an injury to his leg.

The commissioner declined to confirm whether the targeted person or perpetrators are known to police.

However, he noted police “are aware” of who they are looking for and added police are “following significant leads”.

The commissioner also insisted this incident is not connected to the recent homicides in the country - particularly Friday’s double homicide. One of the victims in that double shooting was a man previously wanted by police for murder.

Despite these incidents of violence, the commissioner underscored the public should feel safe.

“Members of the general public, I wish to advise that you can move about in your normal daily business. This is not a situation where persons are going around shooting anybody.”

When asked if he thinks the public feels safe, Commissioner Ferguson replied: “I feel safe and I think you feel safe.”

He admonished people to “be very aware of the company that you keep.”

He also warned the public to be “very careful of the misinformation” being spread on social media.

RBPF I am unimpressed by your response to this incident.
"Be aware of the company you keep..."
Yeah I guess that 10 year old should have really known better??? smh

Do you understand the mindset of an individual who cares nothing about where they are shooting and who gets hurt? This is not a joke. It also means it can happen again anywhere and at anytime. People have a right to feel afraid.

I hope this serves as a lesson that they need to place the EMS service on it's own network that doesn't rely on BTC or ALIV. They were lucky no one died as a result of being unable to contact EMS during the time when BTC was experiencing issues. In other countries even if you don't have signal or data, you can still make emergency calls to EMS.

And I won't even touch that shiite show of a press conference. SMH!!!

Sic, sic. Really Comrade Marvin playing down Colony of Out Islands very first mass shooting as a tragic and "unfortunate incident”. Both he and Commissioner of Policeman's Commish Anthony, better begin target shooting for exactly what it certainly is - an armed thug(s) who came party ready with recklessness fire live intent murderous bullets into crowd men's, woman's and children's, yes, no.....has been worst grouping cabinet ministers at any period during Colony of Out Islands long history..........

"Minister of National Security Marvin Dames described this as a “tragic and unfortunate incident”. Both he and Commissioner of Police Anthony Ferguson stressed that the target was a specific individual - not the general crowd." "Despite these incidents of violence, the commissioner underscored the public should feel safe."

What IDIOTIC statements from a couple of eejits.

Plenty more mass shootings to come because the shooters are a natural by-product of the dreadful situation our country finds itself in today as a result many years of failed social and economic policies heaved on to our backs by successive corrupt PLP and FNM governments. For the shooters in this particular mass shooting, the igniter might well have been summer heat applied to already simmering hatred of one or more persons at the birthday party. Who knows? It certainly all just boiled over into gun fire aimed at a crowd of people. No doubt there will be copy cats down the road. There always are.

That's a part of the quote from the article. If he and his officers have no intelligence then they are in the wrong business. They should run for Parliament.

I was tempted, but resisted, LOL! That IS about the size of it in a nutshell!

Looks like the police in the photo are casually interviewing the tree!

You’re an idiot. None of them are even facing the tree.

We are reaping what has been sown by the reckless, indifferent and pathetic parenting of the majority! Why be surprised or disappointed!

9 Awake, awake, arm of the Lord, clothe yourself with strength! Awake, as in days gone by, as in generations of old. Was it not you who cut Rahab to pieces, who pierced that monster through? 10 Was it not you who dried up the sea, the waters of the great deep, who made a road in the depths of the sea so that the redeemed might cross over? 11 Those the Lord has rescued will return. They will enter Zion with singing; everlasting joy will crown their heads. Gladness and joy will overtake them, and sorrow and sighing will flee away. 12 “I, even I, am he who comforts you. Who are you that you fear mere mortals, human beings who are but grass, 13 that you forget the Lord your Maker, who stretches out the heavens and who lays the foundations of the earth, that you live in constant terror every day because of the wrath of the oppressor, who is bent on destruction?