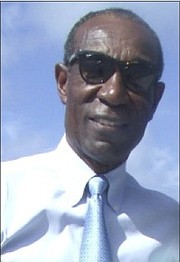 CRAIG Flowers, FML Group of Companies owner, sees the Minnis administration’s proposal to only tax lottery play winnings as “problematic” for his chain of web shops where revenue is largely based on the numbers game.

In an interview with The Tribune yesterday, Mr Flowers said 85 percent of his business comes from the lottery, adding he expected many customers to shift to online casino games where no taxes will be imposed.

For this reason, he called on the government to impose taxes on both lottery and casino games.

Otherwise, he predicted his business could take a huge blow, as customers are likely to shift to casino-based games where there is more of an “incentive” to play.

He told the House of Assembly last week the government had decided to focus this levy solely on lottery/numbers operations because it was too “complicated” to calculate the winnings from online casino games.

“Well that’s a problem because my company, FML, more than 85 percent of its revenue is from lottery,” Mr Flowers said of the winnings tax. “We have not and have never encompassed or professed to be a casino-based company.

“We are oriented with members online who play their numbers through our system from home. If the government now chooses to tax only lottery then why would I want to play lottery to win if I am going to be paying a five (or 7.5) percent tax? If I win the same amount in slots, I don’t pay anything. So I expect to see most people go towards slots where there are no taxes.

“(This) could have a huge negative impact.”

The new winnings tax, due to take effect when changes to the Gaming House Operator Regulations are implemented at the House of Assembly’s next sitting on Wednesday, will see five percent paid on winnings up to $1,000 and 7.5 percent on anything greater than $1,000.

Mr D’Aguilar said this “small tax on winnings” was projected to yield between $10m-$15m annually for the Public Treasury and help take the government closer to the $50m total web shop revenue target it had envisioned under the initial tax structure for the industry.

Mr Flowers said he’ll now have to consult with his attorneys as he suggested there had been no conclusion to his issue during a Sunday meeting he attended several weeks ago at the Office of the Prime Minister.

“We’ll have consultation with our legal advisors and see what is the best way to have some sort of dialogue behind this because what is the rationale behind choosing not to impose the tax on the entire industry across the board?

“We know for sure that the calculations of the taxes if we want to go to the very cent may present a problem, but we don’t have to. The proposal is to pay or to tax any amount over ten cents and up. If I win less than 10 cents it’s free, but anything over ten cents in the slots and the casino games should be considered the same as the lottery games and the entire industry should be taxed.

“Don’t exclude one because now we are going to get into trying to tell the customers where best to purchase or to win. The customers are here to win not to play.

“If I win by playing slots and I am not exposed to the five percent tax that is certainly more incentive for a way for me to spend my one dollar if I am going to spend it today in entertainment by way of gaming.

“You don’t have to be rocket scientists to figure that out,” Mr Flowers said.

Last week, Mr D’Aguilar said Bahamian gamblers had got off relatively lightly, as the comparable winnings tax rates in Jamaica and Barbados are 15 percent and 20 percent, respectively.

In the US, he added that the federal tax rate was 25 percent, with state and local taxes on top of that.

This damn low-life criminal thug Flowers would already be behind prison bars if it were not for Vomit Christie and worthless Alfred "Wanna Be" PM Sears.

Flowers is acting like people actually win anything worth taxing from him....

Can't the churches take up a special collection one Sunday per month to assist with the financial difficulties?

"He told the House of Assembly last week the government had decided to focus this levy solely on lottery/numbers operations because it was too “complicated” to calculate the winnings from online casino games."

Do they ever actually WORK for a parliamentary living?

What a time in our country. The numbers man f..king crying. Geez

In some countries criminals aren't even allowed to vote.