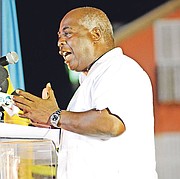 THE Progressive Liberal Party will vote against amendments to the Immigration Act set to be debated in the Senate today. The opposition party said it is “fundamentally opposed” to the reforms that the PLP feels “will loosen the controls that we presently have to protect the integrity of our borders and our workforce.”

“The government intends to push through amending the Immigration Act despite there being no consultation with affected stakeholders nor the Bahamian people in general,” the PLP noted in a statement issued yesterday.

“This is part two of the dismantlement of the Bahamianisation policy actively underway by this FNM—Minnis and Symonette—administration. Part one being the enactment last year of the Commercial Enterprises Act.

“These policy changes remove protections for Bahamians in our national economy and award new privileges and rights to foreign investors, foreign workers and foreign professionals in our country. This FNM government’s declared policy is that through these radical changes, Bahamians will get a ‘trickle down’ benefit. These measures will have the opposite effect and instead will further marginalise Bahamians in their own economy.

“The [Official] Opposition opposed the measures in the House and will oppose them in the Senate. . .We will vote against this Bill. We encourage all Bahamians to contact FNM senators to vote against this bill.”

Last month, Bahamas Bar Association President Kahlil Parker criticised the amendments—which will create new work visas—as unworkable. At the time, he also condemned the government for not consulting with the BBA, claiming the changes would undermine the country’s sovereignty.

The association also said the law changes could threaten the legal profession and other sectors.

The Immigration (Amendment) Bill 2019, which was passed in the House last month, will create two new visas. The BH-1B work visa, according to the bill, would grant a work visa biometric card to anyone who has permission to engage in gainful occupation in the country that has a specified commercial enterprise certificate under the Commercial Enterprises Act.

The BH-4S permit would allow the spouse or dependent child of a BH-1B work visa holder to reside in the country and enroll in educational institutions during the duration of the permit.The bill also allows for exemptions for short-term visas.

The PLP is 100% right on this one. The Minnis-led FNM government would be usurping our constitutional rights and putting the interests of foreigners, including illegal aliens, ahead of our interests if it enacts this new immigration bill.

Yea and the PLP does nothing so we are flucked whatever happens until we get rid of our system of government!! What would the papers write about if not the moron's elected to run the country into the ground...