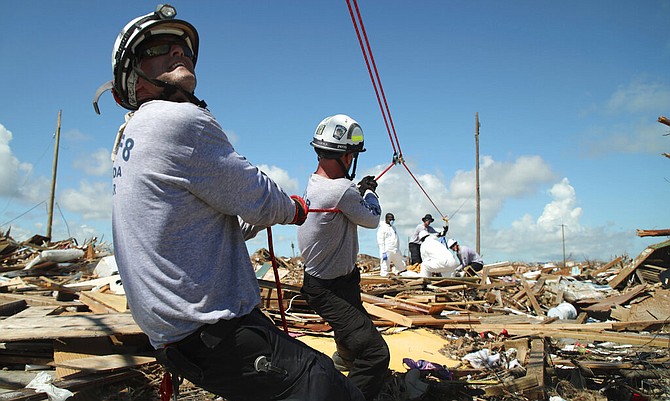 HEALTH Minister Dr Duane Sands said the unidentified remains of people killed by Hurricane Dorian will be respectfully placed in a burial site after a consultation process with the public has been completed.

Speaking to reporters Dr Sands said family members can later retrieve their loved ones’ remains if the identity process takes place after a burial.

Dr Sands also called on family members to come forward and identify their loved ones killed by Dorian. Up to press time, the official death toll stood at 61.

He said: “We have pretty much completed all of the autopsies I believe that given the fact that there have been no significant retrievals, the forensic team has caught up, they have captured DNA samples, soft tissue and bones.

“The challenge remains in Abaco where the majority of the remains have not been identified. And I think what we now have to do is make a public announcement to try to get family members to come forward in order to identify the victims.”

He added: “At some point in time once agreed and the public consultation process has been completed, then based on international standards the plan would be to place in a respectful way the remains in a burial site where they can be retrieved if the identification process takes placed subsequent to burial.”

Dr Sands said there are no plans for bodies to be flown to New Providence but officials would like to ensure that the public is made aware of the process of identification.

Dr Sands said: “As we have refined the missing persons list then it is assumed that perhaps some of the people on the missing persons list maybe among the dead but then perhaps not. Then what we would be able to do is to say this is the process to provide information. Where was the person last seen? What were they wearing? Did they have any identifying characteristics?

“Do they wear braces? Did they have tattoos? Have they had surgery? Do they have any scars? Had they had an amputation? So, on and so forth. All of these things are helpful and as we narrow it down, we’ll be able to compare that to the database and then we can get tissue samples or DNA samples from an inquiring family member to see whether we have the remains.”

Dr Sands said out of Grand Bahama, eight bodies have been identified and released to their families. He said the remains of 46 bodies are being kept in a freezer and seven bodies are in the morgue’s cooler in Abaco.

He said: “Well, we have one body out of I believe nine in Grand Bahama and the remaining bodies would be in Abaco. I think we now have…I believe the number is 46, I believe but without having the data in front of me I would say that is a cautious 46.”

When asked for a timeline of how long the bodies will be kept before they have to be buried, Dr Sands said as long as they are refrigerated, they can be kept indefinitely.

“We have remains in our possession at the Princess Margaret Hospital that have been there more than a year. Clearly that is not the ideal and we believe that once the appropriate education process and interaction with the public has been adequate that is not an unreasonable to allow these souls, these victims to have the appropriate resting place for their remains,” he noted.