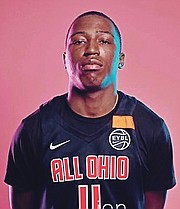 BAHAMIAN prep basketball prospect Garvin Clarke is set to play at the NCAA Division I level after he verbally committed to an "in-state" programme.

Clarke is set to enter his senior season for the Cleveland Heights Tigers after spending his previous seasons with the Euclid Panthers, both in Cleveland, Ohio.

The 6'0" point guard is listed as a two or three-star recruit by several recruiting services and previously received Division I offers from Buffalo, Cleveland State, Florida A&M and Youngstown State, according to cleveland.com.

Last year, Clarke averaged 17.1 points and six assists en route in leading the Panthers to a Division I district championship.

On the AAU circuit, Clarke is a member of All-Ohio Red and participated in the Nike EYBL circuit where he averaged 10.4 points, 5.7 rebounds and 4.1 assists per game.

At the Nike Peach Jam, he averaged 7.8 points and 5.1 rebounds per game.

Clarke looks to boost the Tigers programme in his lone season under new coach JR Bremer after last year's 13-11 finish which concluded in a loss in the District I semi-finals.

Clarke's national recruitment profile increased after his performance at the 2017 NEO Youth Elite Camp in Ohio.

Slam magazine profiled his standout performance at the camp, surrounded by some of the best players in the region.

"A native of the Bahamas, Garvin Clarke made the move to Cleveland and hasn't looked back. The lanky lead guard got to the paint at will, showed off great natural scoring instincts, and really put the clamps on defensively.

"Having put up big numbers as a freshman at Euclid and with a growing list of D-1 offers, expect Clarke to be a name that you hear more about sooner rather than later."

Akron competes in the Mid-American Conference and enters its third season under Groce.