Insight: Juggling Problems But Bpl Has To Remain The Priority 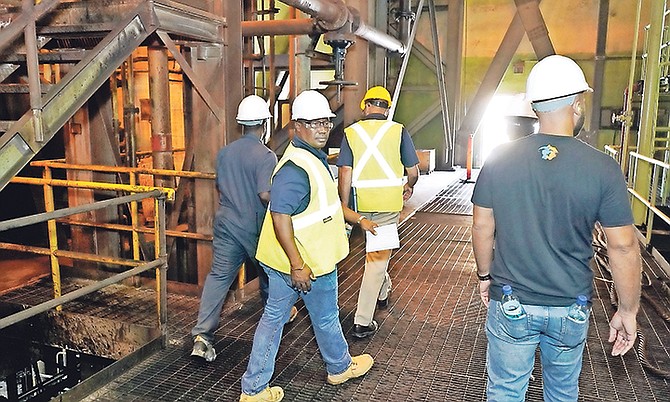 BPL plant Clifton Pier. The power outages at BPL are taking priority right now according to the government - putting unions in a back seat for their negotiations. Photo: Terrel W Carey Sr/Tribune Staff

AFTER months of inaction on the country’s power generation challenges, the government’s recent focus on remediating the crisis has been welcome. Proclamations by the nation’s top brass - first the prime minister, and more recently, the deputy prime minister – while not completely making amends after months of nearly daily power cuts, have certainly been better than complete silence.

Addressing Bahamas Power and Light’s (BPL) recent struggles, Prime Minister Minnis finally acknowledged what many others within government wouldn’t and labelled the current state of affairs exactly what it is – a crisis.

Now, seemingly poised to provide the Bahamian people with some relief, the government is yet again between a rock and a hard place. While BPL was busy driving nearly every person in The Bahamas to the brink of bursting into flames, labour relations in the country have also been heating up with the Bahamas Public Service Union (BPSU) and the Bahamas Doctors Union (BDU) continuing to lock horns with the government after strained negotiations.

While expressing the frustrations of the junior doctors, BDU president Dr Melisande Basset said, “I want you to realise that this is (us) standing on a principle here. If we continue to allow whomever it is, whether it’s a public, private employer, whomever. If we continue to allow them to whittle away at workers’ rights, at the end of the day we will be left with nothing. We will just be simple slaves.

“The laws are there to protect the Bahamian people. And people may hate unions and may look at us as being devils, but we serve a purpose: to ensure that workers’ rights are protected. You could hate us…You think that we’re greedy…But think critically and just put yourselves in our position and ask yourself if you would put up with the same thing.”

Realistically, when it all boils down to it, how can one argue with her? It’s not like Bahamian doctors got to put less hours into their studies or didn’t have to apply themselves as much as their contemporaries from other countries that may receive higher compensation elsewhere.

Yet they are still looked upon by some as being greedy. It goes to show how little the populace appreciates the work of doctors in the public sector. And if one needed more evidence, look no further than Minister of Health Dr Duane Sands’ announcement of $700m plus of unpaid hospital bills at Princess Margaret Hospital.

You get what you pay for.

Unfortunately, a lack of appreciation is echoed throughout the public service by many. Furthermore, the government’s adamance that it has more pressing matters to attend will do little to cool tempers, as the BDU has already alluded to additional strike polls in the near future.

Certainly, with its plate already full it should behove the government to ensure doctors in the public service are satisfied to avoid this becoming even more of a spectacle. Others would argue it is just the right thing to do. Considering the length of time spent away from their families - first in university and later tending to the nation’s sick - along with the physical toll it takes on their health, most of their salaries pale in comparison with doctors in other countries in the western hemisphere.

It is no wonder they are frustrated. Any fair-thinking Bahamian should understand their annoyances. And under regular circumstances, we should all be standing in solidarity with the doctors who are justifiably fed up with waiting on the government to address their concerns.

However, to our misfortune, The Bahamas is not experiencing the conventional circumstances.

BPL just happens to be the bane of the citizenry’s frustration, and for the majority of us, nothing else takes priority over the government fixing this vexing issue.

Lucky for them, the government’s agenda to be a more fiscally responsible administration, and more importantly, BPL’s latest failings have coincidentally provided the government with an excuse to leave the public service hanging – one that won’t cost them too much politically if they are able to resolve the challenges at BPL.

That certainly seems like what they’re banking on as it was not more than a few days ago when Deputy Prime Minister and Minister of Finance Peter Turnquest discussed the precarious position of the nation’s finances with the media. Pointing to what he called “limiting circumstances”, he all but ruled out a scenario where the unions and the populace can be satisfied, and the government could stay on its course toward fiscal responsibility.

Calling on the nation to be more “practical and reasonable” as the government performs its latest juggling act, he said: “There is only so much revenue that we generate that goes to pay all the costs to provide services to people.

“We don’t want to go back to a situation where we are borrowing head over heels, uncontrollable borrowing, uncontrollable spending, to the extent that we put ourselves back in a precarious financial position that we have worked so hard to overcome.”

Certainly, that doesn’t sound like something we want. However, the Bahamian people still struggle with the widely shared belief that the government finds money to pay for what it views as a priority. Whether it is the purchase of a hotel, exorbitant rent for the governor general’s living quarters, or subsidising education for University of Bahamas and BTVI students, the government has shown that when it sees it is necessary, it is prepared to foot the bill.

It is difficult to ignore the message that may be subconsciously being sent to those in the public service. Reasonably, one can understand why the unions are beginning to draw their lines in the sand.

However, there isn’t much support from common citizens as everyone’s focus is on having their own misery cease.

Last week, the deputy prime minister made it clear that the government would spare no expense to ease the burden being carried by the Bahamian people as a result of BPL’s inability to keep the lights on. However, when discussing the recently increased labour tensions, Turnquest was unbending when he attempted to balance the need for the government to address the power crisis but also maintain its policy on being fiscally prudent.

“I think everybody would understand that if we did not have reliable, clean, consistent power, the discussions we (are) having with the union is moot because that is the foundation.

Of course, there is the argument the government should be able to walk and chew gum at the same time. But without a clear plan on the table indicating how we’re going to navigate through the consistent torment we experience with BPL, perhaps it is best for the government to home in on this matter.

We refuse to wait a moment longer for the government to alleviate the damage BPL has inflicted on its customers – the Bahamian people.

At the same time, in earnest, the government has to read the tea leaves.

Before there is another general strike, the government has to begin making proactive steps toward mending its relationships with the unions and essentially the public service. With morale unquestionably low, it’s reasonable to assume members of the public service feel undervalued.

Hopefully, all sides can get back to the negotiation table and are able to work towards a mutually beneficial end to these negotiations as soon as possible.

Like it was discussed last week when we were looking at increasing the minimum wage, this is another matter that requires the government to be calculated and precise in rolling out its plans. The tendency we’ve witnessed by successive administrations to allow small issues to become massive problems has to become a thing of the past.

Efficient leadership identifies problems early, and in a short timeframe, is able to bring about effective solutions.

Imagine where we could be if that were the modus operandi of our leaders.

Hopefully, we can get there someday.

Minnis himself is one big crisis for our country - a bonafide crisis in leadership!

So at what point does citizen responsibility and personal discipline kick in? Simple things like paying taxes honestly and on time, paying the hospital when you use the services, being productive and not cheating your employer or fellow citizen, wanting something for nothing,,,, Perhaps lessons on the mechanics of government and personal finances should be taught in schools from the elementary level. Disciplined societies which embrace the principals of shared responsibility tend to do extremely well. The paternalistic model with the government as our daddy has not worked well for us. Why not try a bottom up model of personal discipline and responsibility, which will resolve at least fifty percent (50%) of our issues?