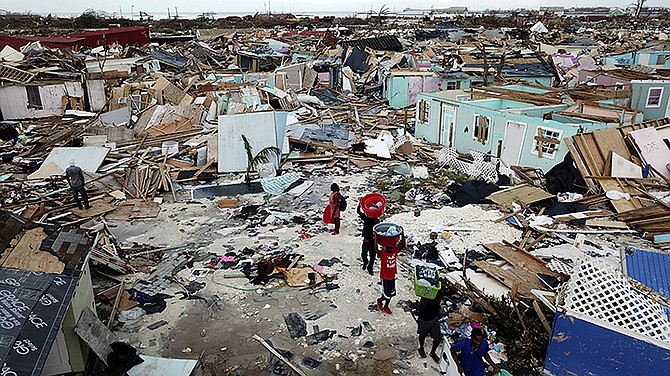 People search for salvageable items as they make their way through an area destroyed by Hurricane Dorian in Marsh Harbour. (Al Diaz/Miami Herald via AP)

• On Friday morning we’ll bring you the latest news on Hurricane Dorian and its impact on Abaco and Grand Bahama.

1am UPDATE: Students from the Bahamas who have been affected by Hurricane Dorian are being offered free room and board at a historically black university in Virginia.

Hampton University announced Thursday that students from the University of the Bahamas can attend classes tuition-free at Hampton during this fall's semester.

The school says that once the semester is over, the Bahamian students who wish to remain at Hampton can continue their education there at the regular rates.

Serving up hot meals at the Bahamas Government Complex in Marsh Harbor, which has turned into a makeshift shelter for families who have lost everything. #ChefsForBahamas pic.twitter.com/zGzylFVHpX

10.25pm UPDATE: The World Central Kitchen has been serving up hot meals at the Bahamas Government Complex in Marsh Harbour, which has turned into a makeshift shelter for families who have lost everything.

7.15pm UPDATE: The Public Hospitals Authority is advising that all inquiries regarding relatives who may have been evacuated from Abaco and Grand Bahama for medical care to the Princess Margaret Hospital be directed to the National Emergency Management Agency (NEMA). NEMA serves as the official agency facilitating the identification of the injured and deceased.

5.05pm UPDATE: Members of the Rhode Island National Guard will be heading to the Bahamas to help with relief efforts in the aftermath of Hurricane Dorian.

State officials say the National Guard will mobilise three C-130J cargo aircraft that will depart from the Quonset Air National Guard Base on Friday.

Maj. Gen. Christopher Callahan says the Rhode Island National Guard has had a special connection with the Bahamas, through a training partnership with the Royal Bahamas Defence Force that began in 2005.

4.05pm UPDATE: From Bahamas.com: The Government and people of the Islands of The Bahamas appreciate the outpouring of concern and offers of generous support in the wake of the hurricane. The best way to support the relief and recovery effort is through a monetary contribution to one of our trusted partners or a donation of specific goods – https://www.bahamas.com/relief

2.45pm UPDATE: The U.N. World Food Programme has purchased 8 tonnes (7.2 metric tonnes) of ready-to-eat meals for Bahamians in hurricane-battered Grand Bahama and the Abaco Islands and is organising an airlift from Panama to set up two logistics hubs in the Caribbean nation.

Given the severity of Hurricane Dorian's impact, he said WFP has set up a $5.4 million emergency operation for three months to assist 39,000 people.

U.N. humanitarian chief Mark Lowcock said Wednesday about 70,000 people "are in immediate need of life-saving assistance" on Grand Bahama and the Abacos. 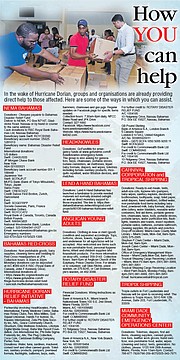 2.30pm UPDATE: HOW YOU CAN HELP: This is a list of groups and organisations (left) providing direct help to those affected and some of the ways you can assist. 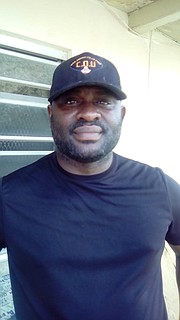 11.15am UPDATE: POLICE Sergeant Dominique McKenzie was not on duty when he sprung into rescue mode, saving not only his family, but six others from an apartment building that was overcome by rising flood water on Monday.

After getting them to safety, the officer and two other men risked their lives, wading through six to seven feet of water some 200 yards away to rescue an elderly woman trapped in neck-high water in her house for two days. Full story HERE

10am UPDATE: From The Tribune’s Ava Turnquest: NO water, no power, no fuel, and no communication was the critical plight facing hundreds of people across the Abacos yesterday. Communities in Treasure Cay, Man-O-War Cay and Moore’s Island have been devastated by deadly Hurricane Dorian. And while critical supplies are running low, the total communications blackout has been a major source of anxiety as many fret over the safety of loved ones on mainland Abaco and neighbouring Grand Bahama. Full story HERE

• From the Associated Press: A rescue, a reunion and a rush – When Hurricane Dorian hit Sylvia Cottis' home at a beach club in the Bahamas, the fearsome Category 5 storm blew out the supposedly hurricane-proof windows, turning the glass into razor-sharp shrapnel that opened a wide gash on her knee – full story HERE

9.50am UPDATE: The US Embassy has said supplies from USAID landed last night to help those affected by Hurricane Dorian in The Bahamas. Nema and the U.S. Foreign Disaster Assistance will distribute enough to help 31,500 people: 600 hygiene kits, 2,400 water containers, 450 rolls of plastic sheeting, 4 chainsaws to remove debris.

The officer and those who assisted him are to be commended!

ditto that...as well as the many others who have performed similar heroic deeds.

'Rough' death projections comrade populaces and visitors from hurricane Dorain in Abaco and Grand Bahamaland may reach '50' or beyond. Government has many more than just the 23 confirmed deceased bodies in their possession or whereabouts known, yes, no .... How does Grand Bahamalander's medics respond such a taxing demand when there is but 'i' single ambulance operational ... what at Abaco .... consecutive national governments plus FREE port's quasi government have lots answer to ....

By the time all is said and done the death toll will be in the hundreds with most deaths in hardest hit Central & North Abaco....many will have unnecessarily died in the aftermath of Dorian, but that's a story for another day.

Inn times like these great leaders are revealed. Such is he!

You die hard Trump supporters really need to tone it down.

Will the red friggin chinese step up? I doubt it.

And to think the Minnis-led FNM government paid Hutchison Whampoa at least $65 million for the Grand Lucayan Hotel and then proceeded to plough many millions of dollars more into the renovation of that hotel as well as absorbing all of its operating losses since the acquisition date. Stupid is stupid as stupid could be!

Good to know you are ok. Hope your family is well and relief comes quickly.

Unfortunately it only takes but a first glance to reveal the government's zero pre and post hurricane Dorian planning and response to Abaco and Grand Bahamaland's destruction continues to shed light for our comrade 'Out Islanders' on Abaco and Grand Bahamaland - shows the serial governing flaws these past 848 days, yes, no .... And, has anyone in FREE port, heard from their 1960's Hawksbill Agreement Quasi Family owned government ....

What none of the "authorities" are admitting is the sad reality that more people are likely to die in the aftermath of the storm than died during the actual hurricane.

This needs to be said so people understand the magnitude and urgency of this massive humanitarian disaster.

Ma Comrade SP, the upfront, frank, true way describe colony's 'aspirational' prime minister's response to Out Islanders and Visitors' .... the 'inspirational' intent is but up he head, yes, no .....

The Bahamas owes the United States of America a huge debt of gratitude, as without the Coast Guard support provided, ultimately authorized by Trump, Abaco would have no hope! On behalf of all Abaconians, Thank You USA and Yes, Thank You Trump, you have a Friend in us, but you already knew this long before the Storm, so Thank You for saving your Friend and ultimately helping us ... Make Abaco Great Again!

Comrade Baha10, to keep this in prospective the U.S. Coast, long before Trumpism, have maintained a Coast Guard base on colony's island of Great Inagua, yes, no ....

@baha10: ditto your thank you to the U.S. government and all of our American friends.....especially the many U.S. servicemen and servicewomen directly involved in the search, recovery and relief efforts...we Bahamians are deeply moved by the U.S. government's showing of tremendous support and humanitarian spirit in our time of great need.

Does anyone know anything about Grand Cays?

WHAT MORON THOUGHT THIS WAS A GOOD IDEA? WE'RE NOT ALLOWED TO SHIP STUFF FROM NASSAU EITHER?!?!

SUSPEND ALL DUTY AND VAT IMMEDIATELY AND GET OUT OF OUR WAY!!!

Why would the Bahamian Government not release the true estimated death toll? The rest of the world is thinking only 30 people are dead, when we know there could be hundreds alone in the Mud.

There are droves of people in florida trying to ship supplies to Abaco and GB and all are being told they cannot without clearance from nema.

TELL NEMA TO GET OUT OF OUR WAY. NOW! WE DON'T NEED SOME DUMB ASS BAHAMIAN GOVERNMENT ORGANISATION DICTATING WHAT WE CAN AND CANNOT DO. GET OUT OF THE WAY OR THERE WILL BE RIOTS...

WE ARE TOLD IF ITEMS ARE DUTABLE THE DUTY HAS TO BE PAID BEFORE CARGO LEAVES FLORIDA..

What is the true body count?