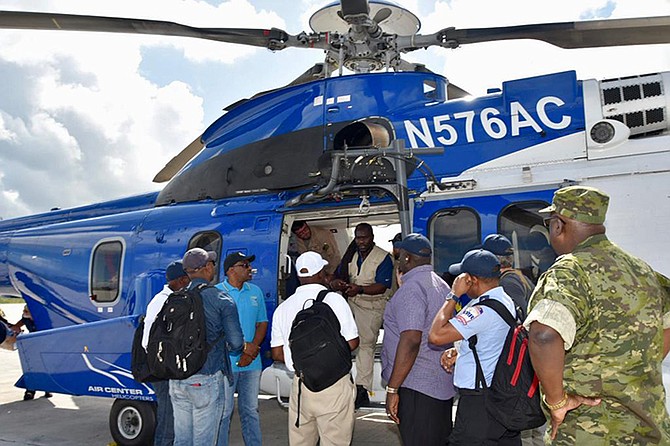 THURSDAY’S UPDATES CAN BE READ HERE

• A national day of mourning is being planned and flags will be flown at half-mast on public buildings.

“At the invitation of the government of the Bahamas, we asked the US Coast Guard to immediately go into action, using their helicopters and other resources.”

• The government is working to set up and secure temporary housing and shelters on the affected islands for people who lost homes.

• The Prime Minister praised the United States, saying President Donald Trump has authorised the full support of the US government for this country and noted that disaster management experts from the US are in the country to provide their expertise. “One of our closest allies and neighbour is the United States of America,” he said. “The president of the United States, Donald Trump, has proven to be a true friend to the Bahamas during this dark hour.”

He added: “Because of their specialty equipment and resources, the US Coast Guard has been leading air rescuers and transport within the disaster zone. USAID is providing significant relief supplies. Members of the FBI are here too along with other US rescue, aid and security officials.”

• The Prime Minister also thanked the United Kingdom, which has sent its Royal Navy; CARICOM, which has sent security forces and aid officials; the Canadian government and the Royal Dutch Navy.

• Dr Minnis called on residents to help. “Instead of criticising those who are trying their best, day after day, in government, charities, churches and volunteers’ efforts, let us all join hands and hearts to focus on the needs of those who are suffering," he said. "Those whose lives are devastated need hope, love and generosity, not needless negativity.

• The Prime Minister said incidents of looting and lawlessness post-hurricane will not be tolerated, adding law enforcement officials have secured Abaco.

• A private accounting firm will have oversight of storm relief donations to the government and will report on how the money is being spent.

6.20pm UPDATE: THE RFA Mounts Bay has completed its ten-day Hurricane Dorian aid mission - with more than 6,000 people helped by British sailors, soldiers, marines and fliers during the mission.

The Royal Navy vessel distributed all its stores - 3,000 ration packs, nearly 100 tonnes of water, more than 900 emergency shelter kits and 1,000 hygiene kits and is now moving to resupply in case of further disasters in the region.

Replacing the vessel in aid efforts is a Dutch vessel, the HNLMS Johan de Witt, which has already brought its first soldiers ashore using Cougar helicopters.

The Dutch ship reported it had "made contact with the advanced liaisons and local government" and were together making a plan to begin assistance.

• The Department of Social Services is the agency managing the government register of missing people. You can register a missing person by calling the missing person hotline (numbers on NEMA’s Facebook page) – you can also visit the Department of Rehabilitative Services and Welfare Services on University Boulevard. At this point there are approximately 2,500 individuals registered on the Bahamian government register.

This list has not yet been checked against government records of who is staying in shelters or who has been evacuated. The database processing is underway. Some individuals who evacuated from Abaco and Grand Bahama have not yet registered with social services and are encouraged to do so at the Department of Rehabilitative Services and Welfare Services.

Some of the government’s list will have to be converted to a digital format to allow for effective cross checking. As NEMA is able to crosscheck they will be able to inform family members and reunite survivors with loved ones.

At the shelters, NEMA is facilitating those who are able to reach out directly to family and friends to let them know where they are. Over 5,500 individuals have been evacuated to New Providence – an update will come on the numbers who have travelled to the US.

• There is a significant reduction in those presenting themselves for evacuation flights. Commercial carriers will be allowed to resume flights starting today on a limited basis. Airlines should reach out to the director general of the Bahamas Civil Aviation Authority in order to gain approval. Organisations for humanitarian aid, repairs and search and recovery will continue to have priority.

Evacuations will continue in Freeport today.

• Parents and guardians of displaced students aged 4-19 can enroll them in a government school in New Providence or any of the unaffected islands.

The Ministry of Education will be registering students at the national stadium beginning Thursday (tomorrow) until Friday, October 11 from 9am-5pm.

Where available, parents and guardians are requested to provide documentation for their children including their immunisation cards – it is understood that some documents may have been lost.

Buses will be provided from shelters to the stadium and shelter managers will be informed of the registration schedule – which will be staggered to avoid long lines. All students from Abaco and Grand Bahama are expected to participate, whether or not they are in shelters. Those not in shelters should call the Ministry of Education on 502-3779 or 502-8319 to receive details on the scheduling.

• Marsh Harbour power station was completely destroyed. Power generation is still available in Wilson City and Sandypoint. The plan is to bring power back to the south of Abaco first – where the least damage is. This will be the staging ground for the recovery. 90 percent of the infrastructure is compromised from Marsh Harbour to Treasure Cay. Equipment has been dispatched to assist crews and there is sufficient manpower – but more equipment is needed.

• The US Embassy can facilitate appointments with hurricane survivors to apply for visas to the US. Hurricane survivors are welcome to visit other countries or temporarily live there while they get on their feet – this must be done with existing visa protocols. The Bahamian government is only providing service to survivors within the Bahamas.

10am UPDATE: From today’s print edition –

• ON most days, Success Jean would wake up at 5am, check on his infant children and set off to do construction work at the Baker’s Bay Golf & Ocean Club on Great Guana Cay. These days, the 37-year-old’s life is confined to wandering a few miles around the Fox Hill Community Centre where he and his family have stayed since Hurricane Dorian made them storm evacuees - full story HERE

• ATTORNEY General Carl Bethel has confirmed the completion of draft legislation to allow for mandatory evacuations once parts of the country are under threat of natural disasters. According to Mr Bethel, once passed, the provision will allow the prime minister through the National Emergency Management Agency to declare a local disaster area and make the necessary orders for mandatory evacuation. The government is proposing to amend the Disaster Preparedness and Response Act – full story HERE

• CABINET ministers yesterday cautioned the public over the spread of erroneous information as officials continue to “meticulously” comb affected areas for deceased victims of Hurricane Dorian. National Security Minister Marvin Dames and Health Minister Dr Duane Sands sought yesterday to rebuff the wave of speculation regarding victims of the storm and to defend the government’s process of officially declaring the death toll, which has been criticised as slow moving. Mr Dames maintained that due to the large areas that need to be searched, it could be weeks before the last body is recovered – full story HERE

• FROM the Associated Press: Hornets owner and six-time NBA champion Michael Jordan is pledging $1 million to organisations assisting with Hurricane Dorian relief efforts in the Bahamas.

Jordan said in a statement Tuesday on Twitter through his spokeswoman Estee Portnoy that he's "devastated" at the destruction in the Bahamas, adding "my heart goes out to everyone who is suffering and to those who have lost loved ones."

Jordan, who owns property and frequently visits the Bahamas, says as the recovery and relief efforts continue he will be tracking the situation closely and working to identify nonprofit agencies where the funds will have the most impact.

Jordan added that "the Bahamian people are strong and resilient and I hope that my donation will be of help as they work to recover from this catastrophic storm."

Personally I don't feel that the public is frustrated at the govenment and other agencies wanting to take their time in the recovery phase. But the problem is that the news is only "filtering" out regarding the victims... EG: The count was 5 for DAYS, then 20 for DAYS, then 43, and (now) 50 for DAYS... What is also important is that bodies are properly identified (picutres, DNA) so that nobody can do anything criminal with the information of that person..

Every day since 1960's when comrades Sir Stafford and Wallace Groves signed the Hawksbill Creek Agreement, not much nothing positive has changed for thousands comrade Grand Bahamalanders who keeps plopping down their tired bodies on their mattresses at midnight, and after getting 7 hours of sleep only to wakes up at 5 am to face the harsh reality that there are two Grand Bahamaland's. There's FREE port, and then there is the rest of even more neglected Grand Bahamaland, yes, no .... now, the harsh cruelty left behind by Hurricane Dorian has left them mattress-less ....

In all fairness to the present Government Administration, where is Fred Smith QC now in light of the disaster in 'The Mud' & 'Pigeon Peas' Shanty town communities?

Every voice that cries out 'to follow me' is not necessarily a voice to listen to.

There is also an online directory of missing persons that was very helpful for families during the aftermath of the hurricane at https://dorianpeoplesearch.com. Thank you whoever made that list. Words can't describe the absolutely horrific response of the Government.

Is that commercial flights for Freeport or Abaco?

For the love of JESUS, please do not mention that clowns name and let sleeping idiots lie. Fred is the only person I wished Dorian would cause to disappear.

Bahamian tax payers are now burdened with the responsibility of the well being of 10's of 1000's of illegal Haitians and not one peep about any financial assistance from the Haitian government for their own people!

To add insult to injury, Haitians are the cause for strained U.S. relations resulting in Bahamians loosing the privilege of ease of travel to the U.S. `in our greatest tim e of need.

The Dominicans' did the right thing in deporting Illegal Haitians. Unfortunately, the PLP and FNM do not have what it takes to protect the Bahamas for Bahamians!!

..... and offer of support is NOT support. Please tell what have they actually DONE!