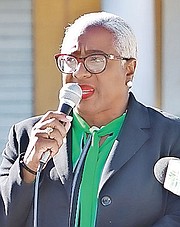 Despite the challenges on Dorian stricken Abaco and Grand Bahama, more than $30m has been spent on clean up says the Disaster Reconstruction Authority (DRA) managing director.

Katherine Forbes-Smith, managing director of the DRA, told a webinar that the DRA has had a “big, big challenge with just how much debris had to be dealt with as a result of Dorian - both in the eastern end of Grand Bahama and generally around the city of Freeport and particularly in the Abacos and the cays.

She continued: “We have three debris management sites currently operational in Abaco, Treasure Cay, Spring City and Snake Cay and then of course, High Rock, Pelican’s Point and McLean’s Town in the eastern end of (Grand Bahama).”

Ms Forbes-Smith also said: “One of the things that has really been good for us is the fact that more than $30m has been spent but spent and stayed in the community with the overall clean up. We have also engaged more than 20 plus local Bahamian contractors who have been involved in the community clean up and I must say that a lot of people obviously in our country have not been involved in anything like this before in terms of a category five storm, but the point is is that Bahamians came on board and have been bringing some skillsets in other areas of construction but was able to really come to the forefront and do the work. That was a really good thing and it was important for us to keep the money in the community.”

Along with the $30m spent on debris clean up, some $3.4m has been spent through the Small Business Development Centre to help small business restart their operations

Ms Forbes-Smith with regard to housing that some $10m has been allocated to the small home repair programme, with 3,099 approved home owners out of 4,314 registered home owners. She said that the $10m allocated “will not be enough” and that funding and financing is a “real problem”.

“The medium term for us will be modular homes,” said Ms Forbes-Smith. Pointing to an architectural rendering of what Spring City Abaco is expected to look like with a subdivision outfitted with 100 modular homes, which will be called “Nelumbo Gardens”.

Ms Forbes-Smith added: “These modular homes are needed for basically, public service workers who need to be able to work in Abaco and quite frankly the 100 is probably not enough when you consider teachers and police officers, defence force officers and persons working in various public services offices we already know that this number needs to be closer to 200.”

The government has also given two 60 acre lots for mixed use development to the DRA for the construction of permanent housing in Abaco and Ms Forbes-Smith said: “We are right in the middle of looking at an RFP (request for proposal) for that. We hope to start construction on these sites in January, 2021.”

What on earth is "Nelumbo"? It doesn't have an Abaconian or Bahamian ring to it!

It's all skillfully crafted by OPM sound great Abacoians that is until they learn how the collective handpicked group the Red Regime's comrades who came by their PopoulacesPublic Purse jobs, originated off the benches and trenches of the ready be called into post-Hurrican Dorian service as handpicked politic appoints won't take too long to accounts for a large chunk $30 million** spoken of? Nod Once for Yeah, Twice for No?

Will you PLEASE remove the debris MOUNTAINS from Elbow Cay?PM says we expect things done overnight. It will be one year day after tomorrow Dorian arrived. How can you expect ANYONE to return to Elbow Cay to smelly heaps of fly and rat infested garbage.? Another Island will be damaged this season by a storm, and Abaco clean up and aid will be forgotten.

There's also the possibility the existing debris mountains on Elbow Cay will be re-spread all over the place by another hurricane.

....and more debris...and in the continued building of more illegal highly irregular, woefully poor construction of 'houses' along with large clusters of such 'houses', it is expected that these 'houses' and clusters of illegal construction will again fall apart, collasping on inhabitants in high winds. Collasping 'homes' in same high winds as flying debris is also danger to other legally approved with established safety standards in homes and structures..extra debris bombarding them...and even more debris.

push it into the water and create a breakwater

while i appreciate that govt staff need homes. Is it really appropriate to use funds donated by the public and channel that all specifically to the benefit of the government itself? I mean i'm not saying it isn't right but did the donors say hey use it build housing for govt staff? do the people of Abaco not get any help at all? Most of the govt staff are typically here for a few years on contract then they go back to Nassau or FPO. I tell you Abaco people have never felt more disenfranchised with central government than the past 12 months.

Gov't went out and bought disposable RV's, i don't know the number but probably round 60 or 70. assuming they cost an average of $40,000 to land on the island that's around $2.5M in disposable housing strictly for government staff. Does anyone think that was a good use of funds? literally going to end up in the dump in another year or so. probably less. I see all these brand spanking new vehicles with red plates. brand new $70,000 ford truck on Elbow Cay when a $10,000 specked out golf cart would do the job just fine on an island that is 2 miles long.

if there aren't any people on the island there is no need for all these gov't staff. certainly no need for teacher housing for the next year. Police aren't doing much so we don't really need housing for them. and why is the defence force camp still sitting on prime downtown real estate paying rent? what exactly are they supposed to be doing? When the gov't reps don't share and talk and enlighten people then thoughts turn sinister. If it isn't gov't in the sunshine then the thoughts invariably turn to suspicion. Yes they finally getting electricity restored 12 months later. but don't pat yourself on the back for a job well done if it wasn't actually done well.