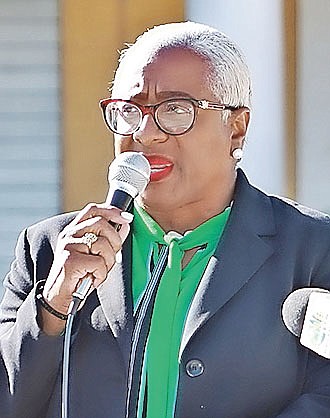 Unidentified victims to have individual graves

UNIDENTIFIED victims of Hurricane Dorian will be placed in individual graves, with a key recovery agency in the country urging that “no one should exploit” this issue. This, according to Disaster Reconstruction Authority Managing Director Katherine

There was no ill intent, says Forbes-Smith as she misses disclosure deadline

FORMER Senate President Katherine Forbes-Smith yesterday told The Tribune there had been no ill intent behind her failure to file an asset disclosure for last year as required by law. Instead, the managing director of the Disaster Reconstruction Aut

Don't be too quick to dismiss pledges, warns Forbes-Smith

KATHERINE Smith, managing director of Disaster Reconstruction Authority, has expressed her dismay over criticisms about pledges made during the Hurricane Dorian Pledging Conference held on Monday. While speaking to reporters in Grand Bahama on Wedne

KATHERINE Forbes-Smith has resigned as president of the Senate and will become the managing director of the Disaster Reconstruction Authority, Prime Minister Dr Hubert Minnis announced yesterday. John-Michael Clarke and Algernon Cargill will serve as