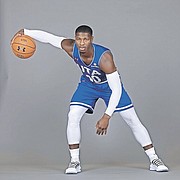 RADSHAD Davis scored a career high 28 points to lead the FIU Panthers to an 82-75 win over the Division II Flagler Saints.

RADSHAD Davis joined the Florida International University Panthers as a graduate transfer expected to have an immediate impact on the programme with his experience.

Through two games he has done just that and has already produced a career high scoring effort on the opening weekend.

Davis scored a career high 28 points to lead FIU to an 82-75 win over the Division II Flagler Saints, in the second matchup between the schools across a three-day span.

In the best shooting night of the career, he shot 10-12 from the field and was 7-9 from three-point range.

“In the second half I just stuck with what we practiced and did what we do, go out there, compete and let everything else handle itself,” Davis said.

“I just want to come here and do what I do which is go out there and compete everyday, play hard and make my teammates better.”

In the two games against Flagler, Davis averaged 21.5 points, eight rebounds and four steals per game. He shot 62.5 percent from the field and 58.8 from three-point range.

Panthers leading scorer Antonio Daye Jr said Davis has been a welcomed addition to the programme.

“Radshad hit some big shots. I kept telling him during the game and on the bench that he’s a baller,” he said. “This is my first year playing with him obviously and I love it. He makes my job so much easier coming off screens and just him being there I know he will hit shots, play hard and rebound the ball, so I love it.”

FIU is scheduled to continue their five-game homestand tonight at 7pm when they host the Central Michigan Chippewas.

Davis transferred to the Panthers in Conference - USA after a two-year stint with the Texas - Arlington Mavericks in the Sun Belt Conference.

Ahmard Harvey is currently a sophomore for the Coastal Carolina Chanticleers in the Sun Belt. He made his season debut with six points and two rebounds in just eight minutes of his team’s 117-68 win over North Carolina Wesleyan.

“We played very well from start to finish, and we knocked down shots from the inside and outside,” said Coastal head coach Cliff Ellis.

“I was pleased with what I saw. We are a deeper team than we were last year.”

Coastal’s next contest will be December 3 at home against Columbia International.

Harvey has played sparingly in his freshman season with the Chanticleers. He averaged 1.5 points and 1.5 rebounds per game in 17 appearances.

He posted a season high seven points in a November 30 matchup against Delaware State.