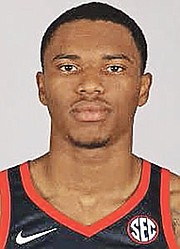 FRANCO Miller Jr ended his time in the transfer portal and committed to join the Florida Gulf Coast Eagles to continue his collegiate basketball career.

Miller’s tenure with the Ole Miss Rebels came to an end in March when he announced he would be leaving the programme. He will have three years of eligibility remaining in his NCAA career. “We are excited to add a student and player of Franco’s calibre to our programme. He is an experienced guard who can play the point guard position or slide over to the wing as a scorer,” said Eagles head coach Michael Fly.

“The coaching staff at Ole Miss was extremely complimentary of Franco on and off the court. With three years of eligibility, his addition should strengthen our backcourt for the foreseeable future in combination with our other newcomers and young players.”

According to the Eagles, Miller becomes the sixth newcomer for the Eagles roster heading into the 2020-21 season, joining four early signees and one graduate transfer. The Eagles will return 70-per cent of its scoring back in the line-up along with seven players who saw significant action in 25-or-more games during the 2019-20 season.

FGCU competes in the Atlantic Sun Conference. They come off a 10-22 season that concluded with a loss in the quarterfinals of the conference tournament. FGCU is best known for their run in the 2013 NCAA Men’s Division I Basketball Tournament, their first since moving up to Division I. They became the first 15th seed to advance to the Sweet 16.

Miller’s tenure with the Ole Miss Rebels came this offseason when he announced his intention to enter the NCAA’s transfer portal.

He scored four points in his season debut against Alabama State, but would go scoreless for the remainder of the season.

Despite falling out of the rotation, Miller made an impact off the court and was named to the 2020 SEC Men’s Basketball Community Service Team. The only freshman to receive the recognition. His community service résumé participated in Adopt-a-Basket, which gives food items to families in need during the Thanksgiving season. As part of Reading with the Rebels, he has visited several local schools to promote the importance of reading while sharing some of his favourite books. His biggest activity was coordinating a campus-wide Hurricane Dorian relief drive to help those affected by the devastating hurricane that hit his native country of the Bahamas.”

He also joined a team visit to LeBonheur Children’s Hospital and helped raise more than $10,000 as part of the first #SinkCancer event at Ole Miss.

Miller had his true freshman season cut short due to a stress fracture in his kneecap that eventually led to surgery. He was granted a medical redshirt.

While sidelined he was one of eight Rebels that silently protested by kneeling during the American national anthem in response to Confederacy rallies hosted near the stadium in February 2019. Minutes before the Rebels’ tipped off against the Bulldogs he joined teammates KJ Buffen, DC Davis, Brian Halums, Luis Rodriguez, Devontae Shuler, Bruce Stevens and Breein Tyree by taking a knee during the “Star Spangled Banner.”

Following his tenure for the Tabernacle Baptist Academy Falcons, Miller played at Crestwood Prep in Ontario, Canada. He led the Lions to the National Preparatory Association playoffs.

While there, he averaged 25.8 points per game, 6.0 rebounds per game, 5.2 assists per game and 3.3 steals per game. He broke the 40-point threshold twice throughout the year, tallying a game-high 42 points versus Thetford Academy and scoring 40 points against the Toronto Basketball Club.

His play also earned him a spot in the prestigious Allen Iverson Roundball Classic as well as the Signature All-Canadian Showcase.

At the local level with the Tabernacle Baptist Falcons, Miller had a senior season filled with accolades highlighted when he was named as the Most Valuable Player of the 34th Annual Hugh Campbell Basketball Classic.