Front Porch: Pm Has Our Safety At Heart - Nothing More Sinister Than That 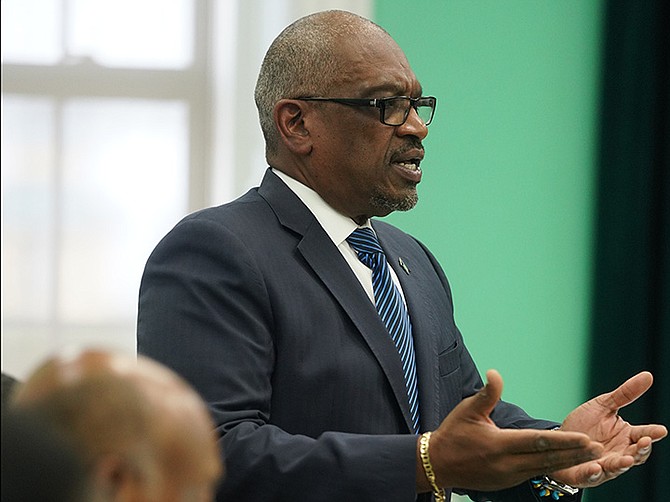 In an impassioned communication in the House of Assembly yesterday, Prime Minister Dr Hubert Minnis pleaded with Bahamians and residents to better appreciate and to take more seriously the current and potential long-term health consequences of COVID-19.

Dr Minnis spent a part of his remarks outlining why the government decided to close beaches and parks on Grand Bahama, New Providence, Athol Island, Rose Island, Paradise Island and other cays surrounding New Providence, for the July 10 holiday weekend.

He assured the country that the decision was based on advice from health officials. He was also was responding in part to what I consider irresponsible commentary and reporting by some on the closure of various parks and beaches. Some of the commentary was profoundly disappointing, especially by those who have a responsibility to better serve the public good.

Various presenters and personalities in tabloid-like news outlets such as the Fox News Channel in the United States routinely and irresponsibly parrot and provide a megaphone for the cacophony of false assertions, hyperbole and self-serving rhetoric of Donald Trump and some in his administration during the pandemic.

It is yet another reminder of the role journalists and the media play in offering judicious and balanced reporting as opposed to - in my view - jaundiced and poor coverage of one of the biggest stories in the lifetime of most reporters.

The coverage by the UK-based The Economist has been exceptional. The magazine has dutifully covered the far-reaching and varied aspects of the pandemic.

Its editorials have been incisive, informative and balanced, observing the successes and innovations and critiquing the failures of governments, business, the media, civil society and international health organizations.

The announcement that there are two and potentially three new COVID-19 positive cases in Grand Bahama was a sober rejoinder to those still playing trivial political and other games during the pandemic here in The Bahamas.

The news also showed that without aggressive measures, which may be unpopular at the time, there can be rapid community spread and the collapse of a country’s health infrastructure.

The comments by St. Anne’s MP Brent Symonette in one of the dailies querying the rationale for closures was curious. Some wonder whether Symonette, who resigned from the cabinet is playing certain political games.

Dr Minnis, a medical doctor, noted that global health experts are still studying the effects of the virus on the human body. He noted a number of potential health consequences which may emerge in the future, including for young people.

There are also immediate health effects which are worrying the medical community. A recent report from Reuters noted:

“Scientists warned on Wednesday of a potential wave of coronavirus-related brain damage as new evidence suggested COVID-19 can lead to severe neurological complications, including inflammation, psychosis and delirium.

“A study by researchers at University College London (UCL) described 43 cases of patients with COVID-19 who suffered either temporary brain dysfunction, strokes, nerve damage or other serious brain effects.”

Michael Zandi, from UCL’s Institute of Neurology, who is studying the effects of the virus observed:

“Whether we will see an epidemic on a large scale of brain damage linked to the pandemic – perhaps similar to the encephalitis lethargica outbreak in the 1920s and 1930s after the 1918 influenza pandemic – remains to be seen.”

A friend who has relatives with asthmatic conditions detailed how careful he has been during the pandemic. He has vigorously observed health protocols and avoided larger gatherings and social outings and occasions to minimize his risk of potentially catching the virus and passing it on to family members.

He is typical of others who have been diligent and careful to limit their exposure to COVID-19. But there are many others who have responded in a pre-modern and pre-scientific manner to the virus, seemingly unaware of basic science.

Many still do not appreciate what exponential growth means and how quickly a virus can spread, including from super spreaders. The pandemic has revealed the lack of basic scientific knowledge within countries including The Bahamas.

In assessing how to communicate public health messages during the pandemic, health and communications officials at home and abroad have had to simplify communicating concepts such as “contagious”, “community spread”, “asymptomatic”, “virus” and other basic terms.

Many people do not understand how something invisible to the eye, like a virus, can be transmitted do so much damage to the human body, and often so rapidly. Such lack of basic awareness is more prevalent in some countries but is also resident in The Bahamas.

The story of Mary Mallon is instructive. Nicknamed “Typhoid Mary” a century ago by the press of the day, Mallon was an asymptomatic typhoid carrier who infected between 51 to 122 people while working as a cook. In the summer of 1906 at their countryside retreat a wealthy family was hit by typhoid fever. Mostly spread through contaminated water or food, the disease was generally associated with the poor and inner-city neighborhoods.

George Soper investigated the outbreak within the family and discovered that the source was a 37-year-old Irish cook, Mary Mallon.

He discovered that of the eight families who subsequently hired her, seven contracted typhoid fever. They all feasted on a number of her “salmonella-friendly” meals. Authorities eventually tracked her down.

“Mallon was also reluctant to accept medical advice, and initially chased Soper out of her Park Avenue workplace with a carving fork when he asked for blood, urine and feces samples.

“When Soper notified the New York Public Health Department, Mallon evaded arrest for five hours until she was caught, and physician Sara Josephine Baker eventually had to sit on her in the ambulance to prevent her escape.”

In 1907 Mallon tested positive for the typhoid bacteria and was moved to a quarantine facility.

“A new city health commissioner helped to release her in 1910 on the condition that she never work as a cook again, but Mallon didn’t keep her promise. Baker tracked her down five years later, working under an alias in the kitchen of Sloane Maternity Hospital, which was in the midst of a typhoid outbreak.”

Medical professionals advised Mallon to remove her gallbladder, which was the infection center in her body. Such a surgery was potentially life-threatening at the time.

Mallon could not understand how her gallbladder could be a danger to her or anyone else as she herself was asymptomatic and not visibly ill. She refused the surgery and spent the next 23 years of her life on North Brother Island, New York, where she was quarantined.

While some have pre-scientific understandings about the world and health matters, there are many acting in an anti-scientific manner during the pandemic, despite the clear and dramatic evidence of the effects of the COVID-19 virus.

What makes this even more worrying is the accompanying dismissal of the science of climate change, which continues to be dismissed with anti-scientific ferocity, typically by the same people who have downplayed or dismissed COVID-19.

Given the more gradual effects of climate change, many of which are clearly evident, the pandemic reminds us of the hard and difficult work ahead to educate and to explain to general populations the global climate emergency, which may help to spawn and to worsen coming pandemics and other global health problems.

But even as the world faces these multiple threats, there are some, whose game-playing distracts from more essential and urgent national and global challenges.