Virus takes jobless to 30% as major hotels shut down 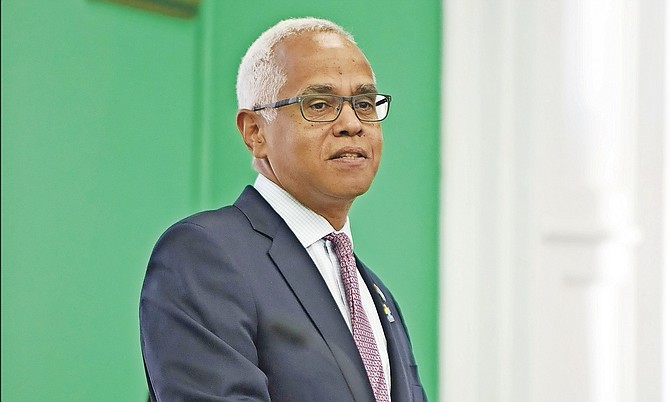 THE country’s major hotels are shutting down because of the coronavirus crisis and temporarily laying off staff, with Tourism Minister Dionisio D’Aguilar saying the unemployment rate is now probably above 30 percent and expected to grow.

Baha Mar, Sandals, Atlantis and the Melia resorts have all announced their planned suspension of operations. Some of the resorts intend to pay staff a fraction of their salaries during the difficult time.

“Every single hotel if they have not so declared (that they are shutting down), are probably heading in that direction as the world closes its borders and shuts down,” Mr D’Aguilar said yesterday. “This is going to be grim.”

Mr D’Aguilar noted laid-off workers can avail themselves of National Insurance Board’s unemployment benefits, “which at least carries them for 13 weeks,” along with union benefits.

Baha Mar said it will lay-off all non-essential workers and pay full-time associates “the equivalent of 40” percent of their base pay, as of Wednesday, for up to 90 days.

“If you have signed up for additional dental, vision or dependent insurance coverage or have established a voluntary employee pension account with the Bahamas Hotel Industry Management Pension Fund, you remain responsible for the payment of any required contributions, however, those payments will be deferred and the company will auto deduct from pay periods following your return to work,” Baha Mar President Graeme Davis said in a letter to employees.

Melia Nassau Beach, an all-inclusive resort which is part of the Baha Mar properties but is a separate hotel, will also temporarily suspend operations beginning Wednesday and will lay-off all non-essential staff.

The resort said it will work to ensure all non-union, full-time associates receive up to 40 percent of their base pay as of March 26 and will work with the hotel union with respect to benefits for union associates. Melia said it will also continue paying the insurance premiums needed for workers to maintain their health, life, accidental death and dismemberment insurance coverage, though workers will see their required contributions deferred and auto-deducted from periods following their return to work.

“A lot of these companies are saying we will give you some sort of help while we go into a shutdown,” Mr D’Aguilar said yesterday. “It is a tremendous thing what Baha Mar and Melia are doing.”

Meanwhile, Atlantis told some employees they will be temporarily laid off for four weeks.

The Atlantis resort on Paradise Island.

“We understand the bearing this will have on you during this period and you are assured of our commitment to support you as we navigate through these uncertain times,” the company said in a letter to employees.

Sandals, a luxury all-inclusive with properties in Nassau and Exuma, announced it will close all resorts from March 30 to May 15.

“Never could we have imagined the impact the current global health crisis would have on the world,” resort founder and chairman Gordon “Butch” Stewart said in a letter to guests. It is not clear what the resort has told its staff.

Hotels are essential to the vitality of tourism-related businesses throughout The Bahamas and their closures will affect smaller businesses in the industry.

Ray Lightbourn, owner of Exuma Water Tours, said he has shut his business down after Sandals Emerald Bay, which employs hundreds of people in Exuma, announced its closure.

“We’re gonna close for six weeks along with staff,” he said yesterday. “We will continue feeding the pigs but we have no choice but to shut down because if we stay open we’ll just be paying staff with no business. NIB said it will now take over paying our staff. We hope this doesn’t last six weeks and that this thing clears up in a week or two. My staff all understands, this is a hard time right now.”

Major cities in the US are being hit hard by Corona. Some cases are doubling overnight, like in New York and California. Donal Trump has deployed the National Guard in four states. So the empty hotels and huge unemployment may be the best case scenario right now.

The colony's prime minister has be some kinds voodoo witch doctor to possess dark facility cast spells in brains that once seemed way above normal before he elevated them up into cabinet.
How else explain how it be's that a comatose comrade patient Is conscious their surroundings. ... they can hear and see all going on around them - loud and as clear as on a bright no wind blowing sunny day. Nod once for yeah, Twice for no?

Well sir you were flying high over others wind, now what can you do?