Face To Face: Cb’S Life Has Been A Perfect Marriage - Church, Community And Francisca By His Side 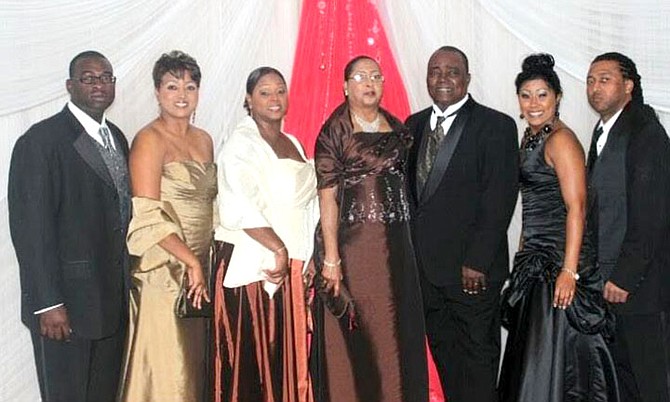 This is a trying time for everyone, especially those who are facing unemployment and an uncertain future. But people are reaching out, pulling together and showing they care in order to cope with the crisis caused by COVID-19. Some have called on the church to play a bigger role in helping not only their members, but their community and one church is doing just that.

Giving away essentials and providing moral support to the community is nothing new for Rev Carlton “CB” Moss and his wife  Francisca. They have led Mt Olive Baptist Church for more than 30 years and been a pillar of strength in the community. For decades now, they have successfully operated a feeding network, permanent clothing drive and community centre. But now that a pandemic has hit, it’s reason for them to kick their spirit of giving into high gear. They have provided more than 2,500 bags of groceries since the lockdown began. Their efforts have not gone unnoticed. Posts on social media made by Bain and Grants Town residents have gone viral - and with good reason.

“In addition to the financial impact of the crisis, there is also fear and the thought of not knowing what will happen tomorrow,” Rev Moss said. “We wanted to reach out to people and calm fears and let them know that we are here to help calm fears and provide some basic needs and support. People are stressed and that can cause paranoia and illness. We believe that if this is not handled properly, it could lead to social disorder. Some people, if they can’t get food, may resort to getting it wherever or however they can. People need a word of hope and encouragement and that has been very important in calming the community.”

The accolades that pour out for Rev and Mrs Moss - and for Mt Olive Baptist church from the community which they serve - are well-deserved. I have personally seen them in action.

The church is located on the corner of Meadow and Augusta Streets and next to it is an outreach centre where clothing and household items are neatly arranged for community residents who need them. A few doors down on Augusta Street is a community centre. Each Thursday, before the coronavirus outbreak, elderly residents gathered and socialised, enjoying a variety of activities before having lunch.

Each Tuesday, residents in need of a hot meal and grocery would gather at Mt Olive. The church also had a feeding network which allowed them to deliver hot meals and groceries to the sick and shut-in members of Bain and Grants Town. Recently their faithful delivery vehicle went out of commission and they are holding a fundraising drive to replace that vehicle.

Since the pandemic occurred, hot meals have been temporarily suspended and replaced with bags of groceries for the residents. They must appear at the church with their nose and mouth covered. A volunteer provides them with hand sanitiser. They must follow social distancing protocol and line up to receive the groceries and other essentials. Giveaways occurred every day except Sunday for the first month since people were sent home from their jobs. Currently, giveaways occur every Monday, Wednesday and Friday. Rev Moss intends to continue doing so for as long as he can and even when the pandemic goes away, he will always do what he can for this community and his country.

In addition to his church, Rev Moss runs the Bain Grants Town Advancement Association. Through this NGO he has organised events for children as well as a literacy drive. Every year for about 30 years the association has held Majority Rule Day celebrations, including an ecumenical service and events that highlight the achievements of great Bahamian nation builders. He hosts a radio show called Spotlight on Bain and Grants Town which airs on Thursdays at 7:30pm and Saturdays at 9am on Love 97fm radio and Moving Forward on JCN TV on Tuesdays at 8pm to keep the community inspired and highlight everyday heroes.

Rev Moss also heads the Coalition to Save Clifton. This environmental group was established in 1999 and was instrumental in protesting against the plans of a developer to turn Clifton Cay into a gated community. The group wanted to make the area a land and sea park and that became a reality in today’s Clifton Heritage National Park.

He also serves as executive director of Bahamas Against Crime, established in 2005. Since then, a series of workshops and seminars have been held, bringing together key players to address the issue. Most recent events include a successful week-long Child Abuse Workshop and a Security Guard Course, which more than 400 people have successfully passed through over the years.

His civic commitment also extends to the Rotary Club of West Nassau. Through his camaraderie with club members, he has received lots of help with his initiatives. Most recently, Rotarians assisted with the donation of ten wheelchairs to people in need.

Professional, civic and religious lines have always crossed over for him. After graduating from Eastern Secondary School in 1963, the young Carlton went on to earn a Diploma in Banking from the Bahamas Institute of Bankers; an Associate of Arts degree in Business Administration, Banking and Finance from the College of the Bahamas; a Certificate in Business Studies from Lindsey Hopkins Institute in Miami, Florida; and a Certificate in Advance Management from the University of Miami.

He began his working career as a customs officer in 1963, working under former Deputy Prime Minister Frank Watson, whose illustrious career in the Customs Department is well known. Carlton fully enjoyed his years there until he moved on to join Commonwealth Bank in 1971. He moved up the ranks at the bank and became the General Manager. One of the significant accomplishments of his banking career was the launching of Suncard, the first and only Bahamian credit card. He went on to join Workers Bank, where he served as Managing Director. He also opened his own firms, Financial Service Bahamas and CB Moss and Associates Consultants. 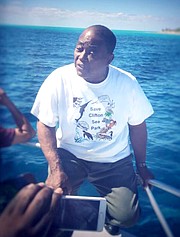 Rev Moss as an environmental advocate.

While successfully climbing the corporate ladder, Carlton felt the call on his life to do more and to serve the Lord. As a young professional, it took a while for him to take up the spiritual mantle.

“I resisted the call for a while… my mind was made up for me”, he said with a chuckle.

“I saw it as a tax upon the way I wanted to live my life. I always saw myself as one just assisting the leadership. I had served in different capacities at various churches. I was at Cornerstone Baptist Church with Bishop Andrew Stuart at the time. One day he came to me and said, ‘The Lord showed me that there is a ministry out there for you’. It got me thinking about independent ministry. Two years later, I decided that it was the way to go. I was ordained in 1981 when I was in my early 30s.”

Mt Olive Baptist Church was started with Rev Moss, his wife, mother, children and a few founding members. His uncle and former pastor, Rev Dr K S Darling officially launched the church. He was expecting his nephew to take over his church, but the Lord had other plans, he said. Rev Moss continued working in the corporate world while growing his new church.

“I have always been multi-vocational,” he explained.

“I enjoyed the professional world and I married them (corporate, religious and civic). It was very exciting. I did not see the religious calling as different from secular calling, except you use different tools and channels. But the call is the same - to serve and to reach others. All of them are one, to me. I didn’t see myself putting on a hat when I enter the corporate world, then switch to a religious hat. You are just singing from a different hymn book. Gradually, the spiritual commitment overtook the secular side.”

All of Rev Moss’ achievements could not be possible without the support of his wife, Francisca Moss (nee Johnson), his high school sweetheart. They met at Jordan Prince William, launched by the Baptist Convention with Rev Dr R E Cooper, Dr Carl Francis, Dr Doris Johnson and a number of other outstanding educators.

“I proposed to her three years after graduation and we became as one. I could not have achieved all I have without her. She is the pillar of all that I do. She is a great mother and a wonderful wife. She is the family’s goodwill ambassador. She did a lot of the duties at home to keep everything together. She is the technical one. She is my accountant, lawyer, secretary – everything. She is a very meticulous person, and she gets it done right the first time.”

Together, they have raised five successful children, now contributing to society in their own right. Rev Moss came from a background where family is paramount. He was born in Chester’s, Acklins as the second of four children of Ethelbert and Rev Celeta Moss. He was about three years of age when they moved to the family compound in Nassau. There on Young Street, Grants Town, he was surrounded by grandparents, aunts, uncles and cousins. The tribe was secure, children had good supervision, and what they needed was always at hand.

Rev Moss believes this type of community living and loving is key to the future success of The Bahamas, and he is doing his part to make it happen. To reach out to Rev Moss and participate or donate to his community efforts, email revcbmoss@hotmail.com or call 325-4357.