Front Porch: Forget The Naysayers, Lawrence Rolle’S Spirit And Joy Delivers A Message To Uplift Us All 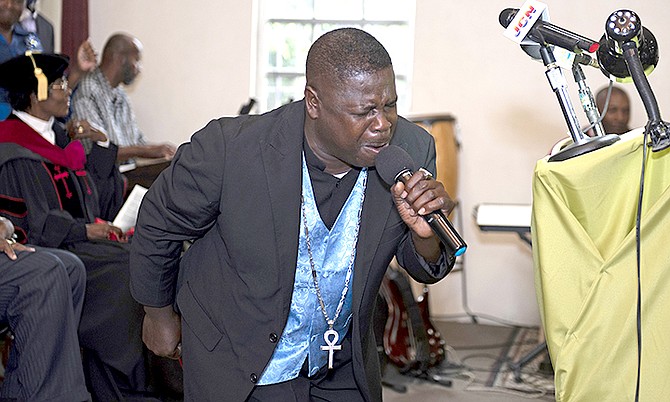 The late Joseph Campbell, a professor of literature whose groundbreaking work in comparative religion and comparative mythology included the book and companion PBS series, The Power of Myth, recalled an exchange at an international conference in Japan.

The priest’s response calls to mind the pastoral ministry of Pastor Lawrence Rolle, often referred to as the Singing Bishop, who has a theology and who dances, both of which exemplify his spirituality and public ministry of love and joy.

Prophet Lawrence Rolle is well-known and beloved by many Bahamians, bringing mirth and joy to souls in need of encouragement. He is not condemnatory and judgmental. His videos and preaching contain messages of spiritual simplicity including about celebrating life and the joy of living.

Many others reflexively dismiss him, often because they do not look deeper beyond his theatricality to appreciate his modern day video parables about love, forgiveness, kindness and generosity.

He uses technology and social media to deploy these parables, often reaching more people than the mainstream churches, many of which perennially lag behind in the use of technology and media for evangelization.

It is easy to judge that which we do not understand, which is why Pastor Rolle is often misjudged. He is someone who teaches others about self-acceptance and the freedom to be oneself, which he does with humility.

A dear friend, who deeply appreciates Pastor Rolle’s spiritual and life messages, said it took her sometime to let go of her mindset and prejudice about him and to see beyond the surface in order to hear the lessons Rolle was offering.

Pastor Rolle often talks about those who go around flaunting their weave, horsey hair and long fingernails. It is a metaphor. He is speaking to all of us with our pretensions, conceits and materialism, our own forms of weave which may be in the form of luxury items, intellectual conceits and nose-in-the-air belief that we are better than others.

One does not have to fully agree with his theology or all aspects of his ministry or his particular charismatic manner to appreciate his core messages and his ministry.

A self-proclaimed sinner who admits to many skeletons in his closet, Prophet Rolle is comfortable in his skin and expresses himself freely and joyfully, transcending the straitjacket of labels and the moral and intellectual boxes in which others may try to imprison his spirit. There is an earnest freedom about him, an infectious joy.

Pastor Rolle is not the flavour of the sophisticates and the high church congregants who may too easily dismiss him, some of whose closets of skeletons may be regular-sized and some whose closets may be as large as a luxury house in Albany, West Ridge, Lyford Cay or some other upscale or tony neighbourhood.

During a two-week ecumenical social and environmental justice immersion seminar in New York City some years ago at Union Theological Seminary, which exposed the participants to a variety of spiritualities and theological perspectives, this writer and others were encouraged to see beyond their denominational experience to find God in all things and in many places we might not expect.

One of the participants, a middle-aged white male religious minister in a mainline Protestant denomination, experienced an epiphany and the dawn of a deeper spirituality and prayer life at a small black church in Harlem.

The minister was profoundly inspired by the dynamic worship experience and daily ministry of the Harlem church to the poor, the hungry and the homeless, many of whom were HIV-positive and a number of whom were still quickly dying just under 10 years into the outbreak of the AIDS epidemic.

Later, during a reflection with other participants, the Protestant minister dissolved into tears, acknowledging he never expected to find God in such new ways in a small off-the-beaten-track or side road away from the main denominational boulevard and its major churches with which he was familiar.

A few weeks ago after another pastor attacked Pastor Rolle, he responded by offering the other pastor his love and forgiveness and admonished his accuser not to give up his anointing and to be dragged into the negativity circus and judgmentalism that is a part of the darkness and not the light.

Rolle refused to be sidetracked into an empty fight that would distract from his greater goal and mission. During his broadcast programme Darold Miller went on air and joined scores of others who came to Pastor Rolle’s defence.

Mr Miller reminded the country that the spirit of Matthew 25:35 was alive on Second Street, the Grove, in a ministry at his church Pastor Rolle calls Labour of Love:

Pastor Rolle along with others from his church, personally cooks food year-round, feeding others in need. He welcomes strangers to eat and to enjoy fellowship, no matter their circumstance. He counsels those in difficult and sometimes abusive relationships. He offers many a break, a space, a time-out from the difficulties of life.

Just as he feeds bodies, Pastor Rolle also nourishes souls through his joy-filled videos and ministry. In a recent video he admonishes a potcake that lives in the churchyard:

“The coronavirus is out. You almost dead the other day. You too need to get saved. … You live in the churchyard and I hope you going to heaven. Say amen!”

The video is a metaphor. He is admonishing all of us, including the churchgoers, many of whom think they are already saved or better than the non-churchgoers because they are regularly in church.

He is reminding us of our mortality and of the need for ongoing conversion and not to take salvation for granted. We are all spiritual potcakes no matter how sophisticated, materially well-off or educated and high class we might be. We all need humility and an openness to finding God’s spirit in ways we may never expect.

Pastor Lawrence Rolle offers a certain joy, laughter, a sense of freedom and self-acceptance, non-pretension and an outreach ministry to the poor and the hurting that many of us would do well to appreciate and, if we can muster the courage and the will, to exemplify.