Alicia Wallace: Why Did This Shameful Ceremony Happen, Robbing The Dead Of Their Dignity And The Bereaved A Proper Moment To Grieve? 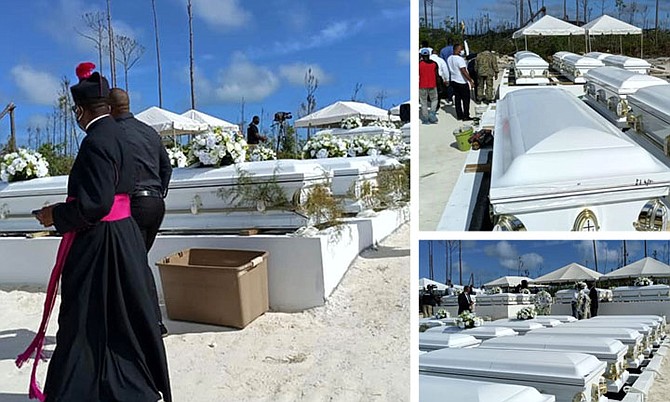 The burial of 55 bodies in Abaco.

When my grandfather died I was out of the country for study. I had planned to return three weeks later, but got the support of my parents and the university to make the necessary arrangements to change the date. It was a difficult time of year because final exams were set to begin in a matter of days. Some people suggested I stay, but others, including my parents, told me to come home if that is what I needed to do.

I do not remember all of the details, but I took a few exams early, travelled to Nassau for the funeral and returned to take the remaining exams. Everyone involved acknowledged the importance of being able to grieve through human connection and ritual. We need to be able to reflect, mourn and celebrate when we suffer the loss of someone close to us. There is no circumventing grief and there is no replacement for the practices we know and depend on. People deserve to have the space and the ritual they need to grieve.

Last Friday, I did not watch the burial of the 55 bodies previously kept in a refrigerated container for months outside of the clinic in Marsh Harbour. I found it difficult to hear people talk about it. I was - and still am - aggrieved that it happened when and how it did. There can be dignity in death and even if a person is denied that, there can at least be dignity in the treatment of their bodies and the care given to their loved ones. These dignities were denied.

There is conflicting information about the efforts made to help people whose loved ones have been missing since Hurricane Dorian, but it is safe to say the response has not been good enough. Strange decisions were made, leading to a burial that kept family members at a distance. Some were not even able to be on the island.

The event was held and a press conference later took place to explain what had happened. None of it makes sense. It is not right. No one would be satisfied with this as the end in a series of terrible events that dehumanized, separated, scorned, ignored and hurt people in many ways.

We must know by now that we will never have an accurate count of lives lost in Hurricane Dorian and its aftermath. There is much to be discussed about the way the initial disaster was handled and the decisions that created subsequent disasters, not the least of which is people being unable to find, identify and inter the bodies of their loved ones.

The people of Abaco have been done a disservice. The government has had its way, but we can still ask why it was done this way. After months of inaction, why now - during a pandemic that necessitates restrictions on public gatherings - have the bodies of 55 people been buried? Why did it need to be done, all of a sudden, in a rush? We may never know what the government decided to bury with those bodies, but we must never forget that day and all that led to it.

With influence comes a little responsibility

Religious leaders tend to have the ear of the government and the rapt attention of their congregations and, by extension, the general public. People not only turn to them for religious purposes, but follow their general guidance. This is why political parties - and government administrations which always insist on behaving like them - are careful not to ruffle their feathers. They depend on these religious leaders to speak the language of red or yellow, influencing the way members vote. Everyone knows their influence, but few call on them to be responsible in the exercise of their power.

This week, church leaders have not only expressed anger about restrictions on church services, similar to those in place for other gatherings, but stated that they will defy them. One has called the restrictions “immoral and ungodly”. Another made false comparisons between the church and other entities such a grocery stores, pharmacies and banks.

If the church is concerned about its income and wishes to operate as a business, it will need to make the necessary adjustments to its registration status. Then it would be able to, like other businesses, allow a limited number of people to enter the building and position themselves on marked spots, following all guidelines including wearing masks at all times and maintaining the requisite six-foot distance between individuals. This would certainly be welcomed as the Government of The Bahamas and, by extension, the people of The Bahamas would benefit from the tax dollars the churches that become businesses would pay.

The motives of religious leaders are questionable at times like this when they put their own ego - which they try to present as moral authority or messaging from God - ahead of the health of the congregants. Why can’t church services be held in parking lots? For churches without parking lots, why can’t they apply for permits to hold their services elsewhere? Is the church merely the building, or is the church the people?

Why can’t churches hold services online? There are many ways to livestream church services including social media and other platforms such as Zoom and YouTube. For years, churches have broadcast services using television and radio. Why not now? If money is the issue, it is not difficult to receive online payments. Members could even make deposits directly to church accounts just as many parents and guardians pay school fees this way.

There is no excuse for this blatantly incendiary commentary from religious leaders. They are being incredibly obtuse and must know it is ridiculous to suggest that it is moral and godly to put lives at risk in order to participate in a weekly in-person ritual that can just as easily be conducted virtually with participation from people with access to the internet, cable television, or radio. For those serving communities and individuals without such access, there were not only weeks to develop a plan to assist them, but months or even years to develop, implement, and collaborate with other entities on poverty reduction and service provision programs.

The Catholic and Anglican churches have taken a completely different approach from those vocal religious leaders. While they have expressed joy in response to the news that they can hold services under relaxed restrictions, they have made it clear they are prioritising the health of parishioners and will not rush to make adjustments. They are developing plans to ensure that when services resume on their properties, it is safely done. Churches, governments and many institutions must learn and help to teach an important lesson - people are more important than institutions.

Verzuz has been providing free entertainment since the beginning of the COVID-19 crisis, bringing artists together to battle song-for-song on Instagram. On Saturday night, Beenie Man and Bounty Killer gave the world a glimpse of the culture that inspired the Verzuz battles we have been enjoying. Scheduled to start at 8pm, the first Verzuz event to feature dancehall artists opened with 40 minutes of music from artists like Beres Hammond as a warm-up by the DJs.

The two-hour livestream was full of energy. Beenie Man and Bounty Killer were each determined to “kill” each other with their selections of their own songs. There was definitely not enough time to play all of the favourites, but fans were taken back with Beenie Man’s Memories and Bounty Killer’s Living Dangerously among others in 20 rounds of play. They even slipped a few dubplates in, bantered about the rules, had an interruption by police and gave us drunk uncle dances. There are now memes and GIFs that will take us back to those two hours and keep us laughing for years to come.

There is nothing quite like seeing two people in the same industry and understood as rivals come together in friendly competition and just vibe. As Bounty Killer put it, the battle was a musical sport and we truly saw the passion they have for their work, love they have for each other and dedication to using their gifts to bring joy. At the end of the event, the internet decided the winner was Jamaica.