Front Porch: Wishful Thinking Won’T Work In A Crisis, We Must Deal With Realities 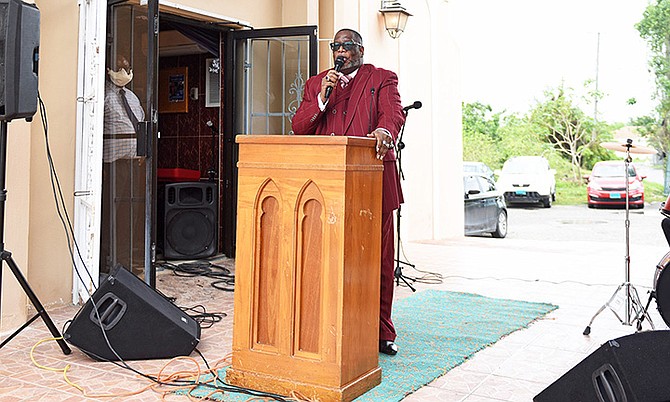 A NUMBER of churches in Nassau have hosted outdoor services due to COVID-19. Photo: Shawn Hanna/Tribune Staff

The notion of magical thinking is employed by a number of disciplines including philosophy, anthropology and psychology, with some differences in how the term is applied in the different fields. A common thread in the various disciplines is the idea of fallacious or false reasoning.

A friend whose father is 80 and who lives in a Midwest state in the United States is on dialysis. He is a strong Donald Trump supporter. Before and during the peak of the COVID-19 outbreak in a state that has been particularly hard hit, her father refused to wear a face mask and went shopping daily.

He blasted the state’s governor for the restrictions she imposed to flatten the curve of the outbreak in order to save lives and to protect health, especially the more vulnerable including those over 70 like the father of the friend.

He vigorously supported those who publicly protested the lockdown, which he thought was an affront to his freedoms and rights, channeling a myriad of anti-government and other Trumpian tropes during the outbreak.

Trump has continued to attack various state governors, parts of the US Federal Government, which he leads, including the Centre for Disease Control, the highly respected Dr Anthony Fauci, Director of the National Institute of Allergy and Infectious Diseases and other respected health officials.

Donald Trump is the great wizard of magical thinking, who debunks science, facts and reason as much as he pathologically lies. Many of his supporters and others often believe his anti-scientific rants, including about climate change. Trump has now said that wearing face masks is a form of political correctness.

A recent NBC story illustrated in graphic terms the disastrous outcomes of magical and irrational thinking, especially about medical issues and matters of life and death.

NBC reported about: “A Florida man who thought the coronavirus was ‘a fake crisis’ has changed his mind after he and his wife contracted COVID-19.

“Brian Hitchens, a rideshare driver who lives in Jupiter, downplayed the seriousness of the coronavirus in Facebook posts in March and April. ‘I’m honouring what our government says to do during this epidemic but I do not fear this virus because I know that my God is bigger than this virus will ever be,’ he wrote in a post on April 2. ‘Jesus is the King of Kings and Lord of Lords.’

“In a lengthy post on May 12, Hitchens said that he was once among those who thought the coronavirus ‘a fake crisis’ that was ‘blown out of proportion’ and ‘wasn’t that serious’. That changed when he started to feel sick in April and stopped working, he wrote:

‘As of today my wife is still sedated and on the ventilator with no signs of improving. There were a couple times where they tried to start weaning her off the ventilator but as soon as they’ve done that her oxygen level dropped and they had to put her back on the ventilator full time.

‘This thing is nothing to be messed with, please listen to the authorities and heed the advice of the experts. We don’t have to fear this and by heeding the advice doesn’t mean that you fear it, that means you’re showing wisdom during this epidemic time’.”

Such magical thinking is also resident in The Bahamas, especially among the more fundamentalist in the country. A medical doctor has told this writer about cases of Bahamians diagnosed with various cancers who refuse or delay treatment, convinced they will be healed through prayers.

During the COVID-19 outbreak here at home, a number of religious ministers have attacked the government for not opening churches sooner and for allowing curbside purchases and home delivery of alcohol before churches were open.

This fallacious thinking and false equivalence argument was not, of course, based in science. It was based in a certain emotionalism and belief that drinking alcohol is generally a vice.

The clear and compelling difference between large groups of congregants gathering together in one location, potentially spreading the virus, is scientifically different from individuals purchasing alcohol online for delivery or picking up at curbside.

Indeed, in a number of countries stores selling alcohol were allowed to continue to operate during much or parts of the outbreak, while in most countries churches, mosques, synagogues and other places of worship were closed.

Even the medically trained can be given to magical thinking. A medical doctor in Russia was interviewed for a cable news programme. She told her fellow worshippers at a Russian Orthodox church near Cathedral Square that it was not possible to contract the COVID-19 virus in a church because God would protect worshippers.

While many religious ministers and heads of churches have cooperated with the government during the outbreak in The Bahamas, some ministers have been convulsed in heated irrationality, their mouths and brows quivering with magical thinking fervour.

One minister went so far as to say on television that members of the Bahamas Christian Council should “grow some balls” and push the government to open churches. For a religious minister to use such language publicly is deplorable. His belligerence is symptomatic of those who believe that their particular needs are more important than the common good.

The COVID-19 pandemic has also led to a sort of magical thinking by some conservatives and right wing sites, who typically deplored the economic and social model of Sweden but who are now praising the Scandinavian nation for much softer restrictions during the outbreak.

The scientific and medical juries are still out on whether Sweden did the right thing. In Sweden they continue to hotly debate the mass exposure or herd immunity theory as fatalities mount. Neighbouring Finland, which had stronger restrictions, has had less deaths per capita.

Sweden is a developed country with high literacy and numeracy rates, a much healthier population, with less obesity than The Bahamas, an extensive social welfare network and an impressive health infrastructure.

Sweden is highly educated and typically more observant of social norms and rules. Sadly, we are a much laxer country, typically given to slackness. With few ventilators and a much less developed health care infrastructure, medicine, tests, masks and other health care assets we could have faced a disaster had we followed the Swedish model.

One can only imagine the greater disaster if the virus was allowed to spread unchecked in many of our islands, with limited health assets and infrastructure.

COVID-19 has exposed many things, including the magical and false thinking, the anti-scientific mindsets and false equivalencies as virulent as the virus itself and in many ways harder to treat and often impossible to cure.