STATESIDE: How tweet it is - Trump’s favourite platform points out a few facts 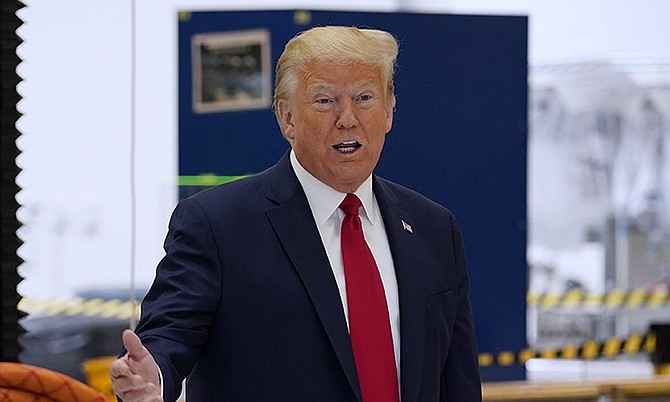 Something happened this week that might turn out to be pretty significant to the way the American election turns out in now less than six months. On Tuesday, Twitter decided to fact-check the President of the United States.

A lot of American liberals, Democrats, independents and resistant Republicans have been urging Twitter to do this for the past three year, as Donald Trump’s nasty lies, slurs and all-round infamous behaviour on Twitter have frustrated and vexed his critics throughout his first term in office.

That Trump maintains a loyal Twitter following numbering in the tens of millions is a source of further aggravation to his many critics, who have charged that Trump is violating provisions of Twitter’s terms of service in lying and consistently repeating objectionable content.

Here’s the Trump Tweet that finally moved Twitter to action: “There is NO WAY (ZERO!) that Mail-In Ballots will be anything less than substantially fraudulent. Mail boxes will be robbed, ballots will be forged & even illegally printed out & fraudulently signed. The Governor of California is sending Ballots to millions of people, anyone living in the state, no matter who they are or how they got there, will get one. That will be followed up with professionals telling all of these people, many of whom have never even thought of voting before, how, and for whom, to vote. This will be a Rigged Election. No way!”

In response, Twitter directed readers to an article that asserts, among other things, that “Trump makes an unsubstantiated claim that Mail-In Ballots will lead to voter fraud.”

A Twitter spokesperson told reporters the President’s tweets “contain potentially misleading information about voting processes and have been labeled as such to provide additional context around mail-in ballots.”

Twitter has to tread carefully here. No need to gratuitously pick a fight with the President of the United States if you can possibly avoid it. But Twitter’s move is still meaningful.

Trump and his Republican allies have waged a resolute campaign to suppress the vote in this November’s election. Among their tactics has been using the COVID-19 pandemic as an excuse to close voting places located in poor or minority sections of big American cities such as Milwaukee where voters would be expected to support Democratic candidates.

Another tactic has been attempted legislative coups. A current example is underway in Florida, where voters in November overwhelmingly approved a measure generally enabling felons to vote after they completed their prison terms. The GOP legislature and governor hustled to try to overturn that mandate with some sleight of legislative hand, but so far have been frustrated by a federal judge. Further court action seems inevitable.

Election chicanery is not unknown in the US. It is generally accepted that John Kennedy’s 1960 election victory over Richard Nixon was crucially influenced by some dodgy results from parts of South Texas and the city of Chicago, to cite an example benefitting a Democratic candidate. More recently, Republicans were recently caught trying to cook the electoral books in a congressional bi-election in North Carolina.

Republicans know the demographic tide is running against them these days. As the acknowledged party of white men and some white women, the GOP is fighting an ultimately losing battle as non-white Americans and immigrants assert increasing electoral strength in numbers.

Senate majority leader Mitch McConnell knows this as well as anyone. That’s why he has so proudly led the fight to install conservative pro-white judges throughout the federal judiciary, including especially on the US Supreme Court.

The big question is whether the Republicans can manage to keep their finger in this demographic dike for one more election this November. Twitter’s decision to finally start to fact-check the mendacious current President won’t help the GOP cause.

US colleges levelling the playing field for students

Every parent aspires for success for their children. In most of the western world, a big part of that success is expected to be a college or university degree. For many Bahamian families, the path to higher education has long led to the United States.

That’s why a decision made last week in California might come as really good news. In a unanimous and stunning decision, the state’s governing Board of Regents decided to ditch the SAT and ACT standardised tests as a part of their admission requirements for the next two years. The decision will be reviewed after those two years, but for now, the playing field for international applicants such as Bahamian high school students has been levelled somewhat.

Reliance on the American standardised tests has been justified on the basis that the tests provide an objective measuring stick to determine if high school students have been prepared to do college and university level work. How are college admissions officials to compare the records of a Bahamian, a German and a Colorado applicant to a school like Harvard? The SAT/ACT has answered that question, at least partially.

But there have long been complaints about the tests. Racial bias has been detected and officials have worked diligently to eliminate it. But for international applicants to US colleges and universities, the competition with American kids for high SAT/ACT scores has always been unequal. American high schoolers, especially from affluent areas, have much greater access to test preparation and other academic resources. It is no surprise they score much higher on average than those, such as Bahamians, with less or very little access to such resources.

The California decision doesn’t presage a similar course for every American college or university. But especially during a health crisis that has upended many facets of American life, the California Regents may have started a trend.

For our high school students with higher education aspirations, we can only hope so.

Brady shows he is human

Anyone who has ever played golf in a group with at least some members who are not close friends knows the feeling. It’s not a good feeling. You’re basically scared to death: What are these near strangers going to think of me and my golf game and even my worthiness to be out here on the course if I shank my drive on the first tee, or hit my first approach shot off line and 30 yards over the green?

This anxiety is perfectly natural. But knowing that doesn’t help a bit when you’re locked up on that first tee or on the first fairway.

Watching one of the NFL’s greatest all-time players struggle with exactly these feelings on Sunday afternoon in a made for TV charity golf match was a welcome dose of reassurance for every golfer who has ever experienced the approach anxiety of a first round with relative strangers.

In an arranged match on a renowned course north of West Palm Beach, Tom Brady, six-time Super Bowl winner as quarterback of the New England Patriots and now with the suddenly competitive Tampa Bay Buccaneers, fumbled and stumbled around for the first six holes of his match with fellow legendary QB Payton Manning and two pretty well-known pros, honorary Bahamian Tiger Woods and Phil Mickleson.

As intermittent driving rain intensified his obvious discomfort, Brady hacked and slashed around the soggy course and generally played like a Sunday duffer.

Meanwhile, his playing partner, Mickleson, was doing his best to keep the team afloat while Woods calmly hit every fairway and Manning did more than just take up space in his golf cart. The former Colt and Bronco Hall of Famer actually won two of the first three holes for his side.

Then, on the seventh hole, as the embarrassment on Brady’s face gradually erased his smile and evoked taunts from lovably chubby Charles Barkley in a guest role as commentator and provocateur, Brady surprised everyone, most of all himself.

From over 100 yards out of the fairway, he pulled out a wedge and holed the shot for a natural birdie. From the commentators to his fellow contestants to the millions watching on TV, no one believed it for a long instant. Brady clearly was unprepared for such success, and showed an all too human hesitation as he attempted to regain his composure and swagger.

His natural grace prevailed, the match continued and proved to be quite enjoyable. After all, it was live sports played by popular, iconic figures and served as a welcome distraction from the dreary mounting death toll and economic hardship that pervades every corner of the US.

And Tom Brady reminded us why we admire him and all sports stars who can transport us to a different, better place.

Well it's rather depressing to unpack an opinion piece; but when it is based on lies and mediocrity one is obliged to correct the record. Trump is absolutely correct about the fraud in mail in ballots; why don't you check the news to see the people in Patterson New Jersey complaining about this very issue. Additionally twitter fact checked the president with an opinion piece, and much like your opinion, has no basis in reality. Finally when has President Trump ever lied? Calling the President of the United States a liar is super pathetic. I can believe your editor let this slide, because this is the disgusting narrative your paper chooses to push, false though it may be. And you wonder why people don't read your cage liner?

On to Paragraph 2: US colleges levelling the playing field? That's hilarious, instead of asking the question why the Bahamas has a pathetic education system that can't produce minds equipped to take a test, let's go ahead and blame it on "muh racism"! Absolutely pathetic. But hey I'll carry your thought experiment through. The standards are lowered and Bahamian students do go to an institution. How are they going to handle the academic load? Oh I know you are Snowflake who would probably blame "muh racism" again. That excuse is going to get you nowhere but hopelessly bitter!